Reflected by the City of Light 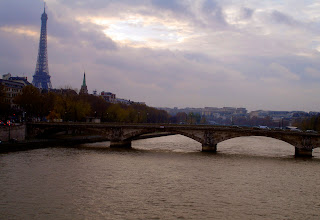 I can't be the first person to think this, but Paris seems to me to be more about the idea of a place than the reality itself. Whether it is the preconceived notions of a kid from the country about the impositions of the capital, the hopes of illegal immigrants that have climbed up from Africa to make the most of their hard-won French or just the open-faced dreams of honeymooners who cast their love on the banks of the Seine. Somehow all of these thoughts, floating through winter's silver light, make Paris seem as if it is not entirely solid, as if you could walk up to the Louvre and push your finger into it as if it were a cream pie. 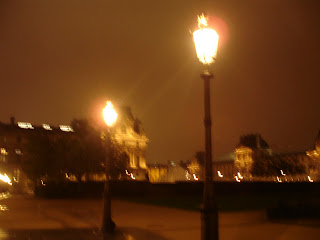 It had been four years since I had been there and even that was a mere jet-lagged stumble on my way back from a story that Remi and I had done in Bali. At the time, I was still cloaked in the resentments and disappointments acquired during my four years of living on the outskirts (because aren't I always?) in the suburb of Vanves. However, I had nothing but hope in my heart for the visit last week. Remi was exposing three of his abstract pieces at the Salon de la Société des Artistes Indépendants, the very one that had been formed by the "rejects" of the Beaux Arts in 1884. Four years later, Vincent Van Gogh, another bad boy with a love of Arles, debuted his paintings from Provence there. Last Sunday, we arrived under the glass domes of the Grand Palais with two thousand other artists, lined up to drop off their works. Admittedly, my inner fashionista was fascinated to be in the home of Karl Lagerfeld's brilliant Chanel shows, but the look of diffused pride on my loved one's face firmly brought me back to the present. 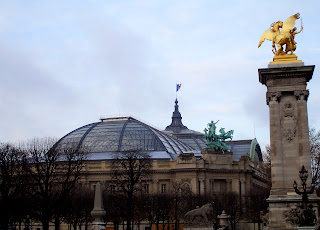 The rest of our trip flew by in a flash of footsteps but there are quite a few lasting impressions. Leaving behind the snobbism of Paris Photo to be the last couple to cross the Jardin des Tuileries in the dark before the gate was closed for the night. Showing up smiling at the office of an important magazine. Unveiling to Remi the Orangerie whose two rooms of Monet's Nympheas very well may be some of my favorites on Earth. And most importantly, the Opening Night of the Salon, where we served champagne in plastic cups to a loyal group of friends and family gathered in front of Remi's photography. 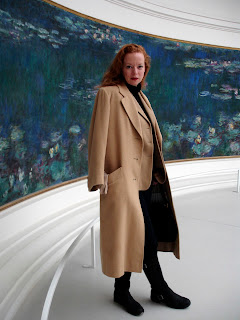 Earlier that day, I splurged and got my hair trimmed with a blow out by the charming owner of an old-school salon in a bourgeois neighborhood. As I sat in a café afterwards, waiting for Remi, I studied the passer-by but also my reflection in the window. How much has changed since my arrival in Paris nine years ago. I was terrified, had lost my much-treasured ability to express myself in face of a new language and felt the heavy stares of disapproval over everything from my rock and roll leopard coats to the way I held my fork. I had left behind my career and family, buoyed only by being wildly in love. Now I can communicate with anyone with nary a "Pardon?". True, at forty-one, I am "Madame", my days of "Mademoiselle" gone for good. If I have grown up a bit, I have also grown out. I do not know what project will be next. But at that moment, inspired by Remi's bravely surging into a new field of art, the weighty warmth of the surrounding café patrons and the impermanence of Paris, I was ready for all that lies ahead.
Posted by Heather Robinson at Tuesday, November 30, 2010