...is sometimes just to stay. A gift of being so relaxed and ready to keep spending time together, most especially as we all swing into the dance of the holiday season.

On Saturday, we invited a small group of friends to join us for an "After the Market" buffet-style lunch. This our new favorite way of receiving folks as it is like tapas on steroids, you can serve as much as you wish without breaking the bank and everyone finds something that they enjoy. Here is the table as it was at 12:30ish, with most of the group arriving at right before 1pm. 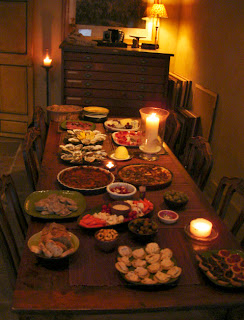 Blinis topped with either lobster or scallop purée, toasts with tapenade or sun-dried tomato "caviar", two kinds of olives (including a rather slimy version with anchovy paste), a jumbled pile of crudités, mini-red peppers stuffed with goat cheese, sliced Andouillette (if you don't know what it is, you probably don't want to), a pepper and zucchini Provençal tart, a salmon quiche, two dozen oysters, a charcuterie plate of smoked ham and paté, another of chorizo and saucisson...Oh, and don't forget the cheese plate! All of this served with the amazing cremant from Bourgogne that our dear friends Sonny and Michael convinced us is far better than cheap champagne and an earthy red from the Luberon.

Now, this is a group that we don't get to see as often as we would like. It turns out that everyone has a lot going on, major changes in the air, so there was much to discuss. I mean really. A lot. We just kept talking and picking at the food and sipping and listening and talking some more. Until it was 5pm, which meant that we could somehow qualify it as time for the "Apero", the Frenchified version of cocktail hour. Remi showed some of his most recent photography, dogs were walked and the fire was kept well-stoked. In the blink of an eye it was 8:30pm when everyone became peckish again, here is what the table resembled at that point: 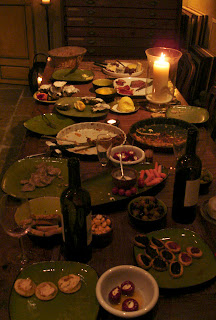 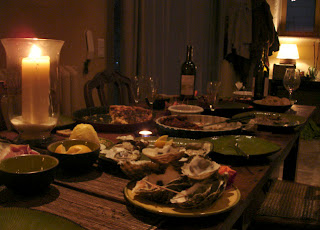 There were lovely moments of unforced quiet, which made me think of Chekhov's line that "an angel had just passed." The mini-desserts that we had ordered from Soulier were gone over a second time. 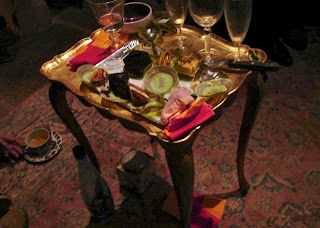 And at 10:21pm, they all banded together, buttoned up to brace the cold. And left, not with regrets because for once, we all had enough of a good thing. I have heard of such get-togethers, where day passes seamlessly into night but had never experienced one. I must say it was such a gift, a very flattering one. For there is nothing as generous as the giving of fine company. 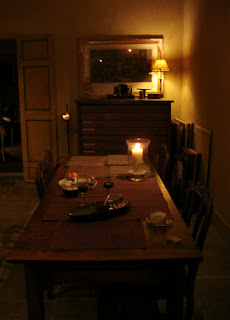