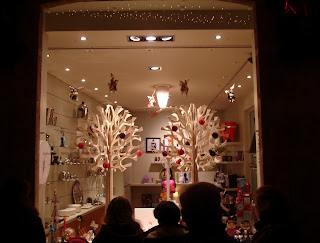 Lucky you! Because my sister asked, here are even more (blurry) photos of the lovely Christmas lights around Arles, taken just this evening. I went for a walk by myself and realized that it had been so long since I had done so. A stroll, alone, without Ben or Remi nor purpose. It does me good from time to time to see my town as our many tourists do, especially at this time of year when it shines so brightly, literally and figuratively.
Today is one of the few Sundays a year when stores are open. France's labor laws still honor things like a day off, a day of rest. I can't help but think of my Mom who is working so hard this week as is my Sister. So for all of you that are exhausted in the States (or here in France as well), know that there is someone wishing you well, saying hang in there a few more days--Christmas is less than a week away! 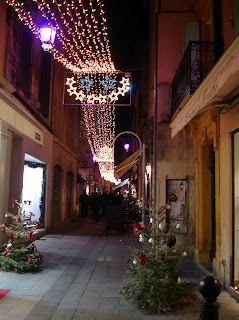 There were truly a surprising number of people out, lots of families and holding of little hands. I followed the crowd up the rue Hotel de Ville and was delighted to find what had drawn them--another showing of  Groupe F's projection on the Town Hall minus the fireworks. I had forgotten how haunting the cello music was and how lovely the "journey" up the Rhone, following a Tinkerbellish spark until we arrived at the very Town Hall that the film was being shown on. As before, polite applause followed this effect. It was especially fun to have arrived in the middle of the projection as an onlooker, so that I could just make out the expressions of those watching it in the spidery light on those of all ages, all sizes. Only the Grinch doesn't love this time of year in these parts and families of all religious preferences are welcome. Here we speak of "les fêtes" or the holidays, more than Christmas though the celebrations for that very special day are wonderful too. With a Communist mayor and a large population with North African roots that are Muslim such an open attitude keeps Arles in balance. 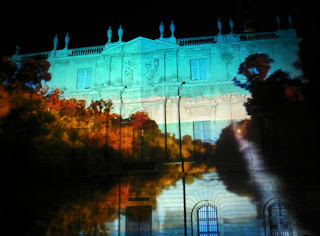 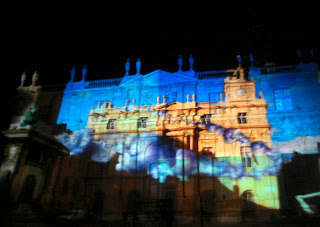 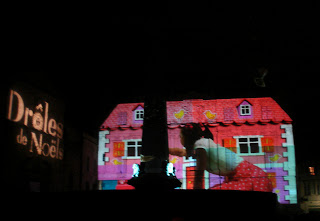 I have a little circle of a walk, actually I have several but tonight I did the loop that usually takes me to Soulier, the bakery with the chatty sales girls and back along the rue de Republique, dotted with boutiques like L'Occitane and Christian Lacroix (an Arles native) past the Place du Forum to home. 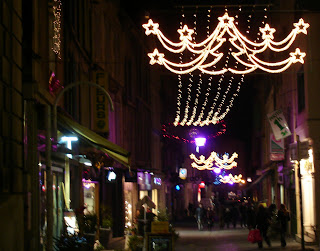 Speaking of Mr. Lacroix, the city workers, being thrifty, brought out all of the magenta film gels to cover the street lights that he had ordered installed for the length of his incredible exhibition at the Musee Reattu last year. Why not? And why not several disco balls too? It is after all, les fêtes! 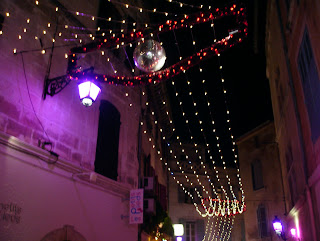