Happy After Valentine's Day everyone. Blogger was not on my side yesterday so I was unable to post this until now but hopefully your roses haven't faded just yet, nor all of the chocolate eaten, so that you can handle one more wistful musing on romance... 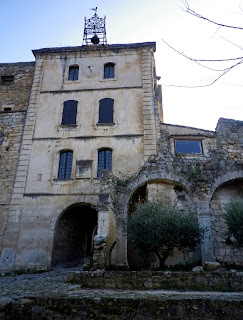 What is Romance? On this Valentine's Day? Many things to many different people, I would imagine and nothing at all to some. I actually did go into my local flower shop this morning to replace my orchid near the front door. The usually jovial women that work there looked at me with a slight wince of "help" as their male customers hemmed and hawed. Often, it looked as if they were trying to pick out something that wouldn't look cheap while spending the least amount of money. I remember so well in Manhattan how this evening, of all out of the year, would create the most awkward moments with the highest expectations, leading more often than not to disappointment. In France, there is less of the pressure to conform to an idea of a commercial holiday but it is felt nonetheless. I can see that my unattached girlfriends are trying to put on a brave face and I know all too well how that feels. As a single, working girl, I once crossed midtown in a snowstorm on this day to buy myself a trinket at Tiffany's because I knew that no one else would. 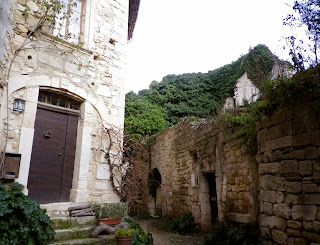 So I think it is good to remember that romance takes many forms. Is not only about love with a partner, of course. And I had a lovely surprise the other day in our perpetual wanderings. I had heard of Oppède le Vieux, one of the storied hill towns at the beginning of the Luberon. It is lesser known than those made famous by Peter Mayle and I was quickly able to see why. It is in ruins. And has been for centuries. 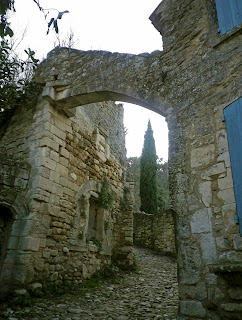 Apparently, Oppède was once home to a line of blood-thirsty Barons with little tolerance for those with different religious preferences than their own. Slash, burn and horror ensued including a battle that killed 3000 residents on a day in 1545. Why is it that some places are left to be forgotten while others rebuild and thrive? The village certainly didn't feel haunted by its scarred past. The stark Notre-Dame-d'Alidon was reconstructed in the 16th century and remains the villages most solid structure, a reminder of what could have been. 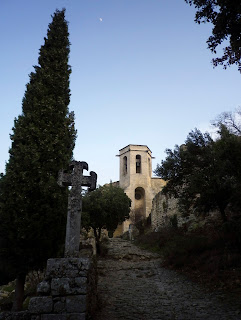 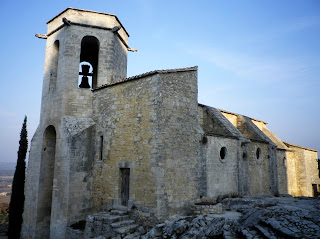 In the 19th century, the remaining residents slowly retreated lower into the valley, weary of the isolation and the pounding mistral winds, and dismantled the roofs of their former homes so as to avoid paying tax on them. Slowly, Oppède le Vieux was left to its own demise, becoming completely abandoned. The medieval fortress that dominates the valley was left to crumble with nature making a swift invasion where armies once could not. 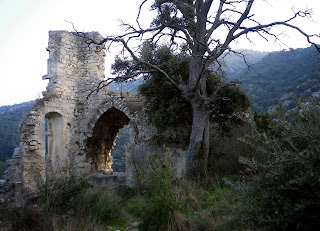 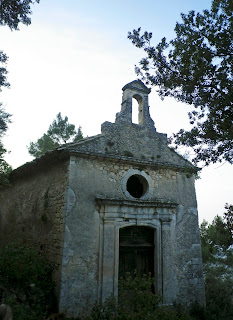 And yet how elegant the remains are, holding their memories tight. Of budding faith in this small chapel of Les Penitents Blancs, of a bustling village coursing through a fortified castle closed up tight. How odd to see their bare bones in the stark winter light. I wanted to cover up the whole village in a  blanket to protect it. A feeling that had luckily been shared by a group of artists after the armistice in 1940, including Consuelo de Saint-Exupéry, wife of Antoine de Saint Exupéry (author of Le Petit Prince and famed pilot) who brought the world's attention to this lost corner of the Luberon in her novel, Oppède. 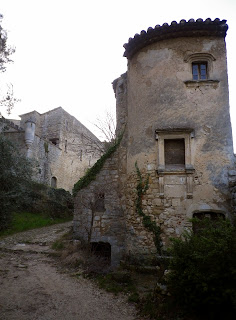 And Oppède le Vieux has remained an artists haven attracting painters and the occasional movie star or two. Maybe that is also the reason why this little village has remained more discreet than its camera-ready cousins Ménerbes and Bonnieux (both of which were featured in resident Ridley Scott's pean to Provence, A Good Year). There are no souvenir shops selling glossy postcards, not at this time of year at least, nor are there paved paths for easy access. Slippery moss covered cobble stones peter off into sheer drops over the valley. Clambering to the top of the fortress is risky and only for the adventurous. But who did I find tucked up beyond a once magnificent vaulted stairway now open to the sky? A pair of lovers entwined in each others arms. They clearly found the setting as romantic as I did. 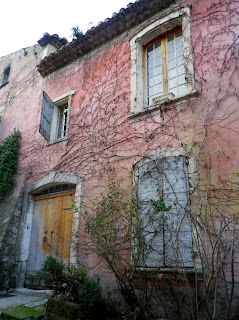 Forgotten beauty, what remains. Ideas that I have been thinking and writing much about lately. It is only normal, I suppose, now that I am growing older. A romantic outlook beyond that wild rush that overtakes body and soul. Something simpler. But that still makes the heart sing. 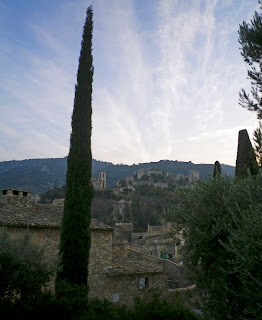