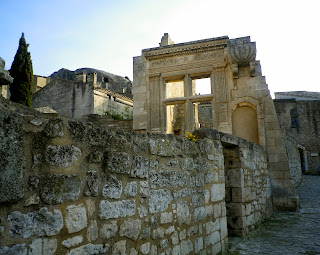 I take Les Baux de Provence for granted. It is so close to Arles that I forget that it is the second most visited attraction in France. Or maybe that is exactly the reason why I choose to forget it. The run of shops selling ceramic chanting cigales embarrass me, as do the bonbon bins piled high with fluorescent treats. There is little in this "grab for the gold" that corroborates with the sites phenomenal past. So best to go in winter, when at least the howl of the Mistral winds covers the Muzak and keeps the largest of the tourist buses in the valley below. 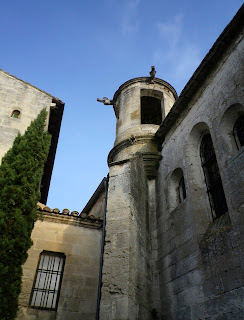 For you do have to go up, up to reach the heart of Les Baux. It was exactly its position on high that called to its first inhabitants as long ago as 6000 BC. An oppidum, or hill fort was built in 2 BC and the rocky outcrop (which is the source of its name in Provençal) has been inhabited ever since. But not without its ups and downs. 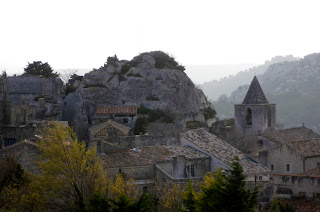 Certainly its most glorious period came in the Middle Ages. The Lords of Baux, whose lineage is believed to have descended from Balthazar, one of the Magi at Bethlehem, ruled 79 towns and villages over a region that stretched beyond Provence into Italy. They had a fearsome reputation and were willing to go to war at the drop of a gauntlet but they were equally voracious in love. The songs of their troubadours are still strung and woefully warbled. 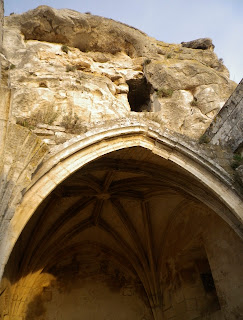 But even the greatest of fortunes can fade. Battles can be lost. By the 15th century, the Lords were at rest. Fortunately, Anne of Montmorency took over their castle in the 16th, transforming it into a Renaissance masterpiece. Again, the power swirled upon the hill, until Cardinal Richelieu, in fear of its strength, had the castle destroyed once and for all in 1632. From there it was left to ruin, rediscovered and acclaimed by the Provençal poets Frederic Mistral and Alphonse Daudet but uninhabited save for a band of beggars. That is until after the Second World War, when Raymond Thuillier brought the likes of Picasso and Churchill to this sleepy corner to eat at his restaurant, L'Oustau de Baumaniere. And the world followed suit. Only in France could such a site be saved by the heft of a golden spoon. Les Baux de Provence has been a marquisate of the Grimaldi family since the 17th century. Prince Albert of Monaco is the current marquis and sightings of the Royal Family in the tiny chapel for Christmas Eve service have also added to the village's timeless allure. 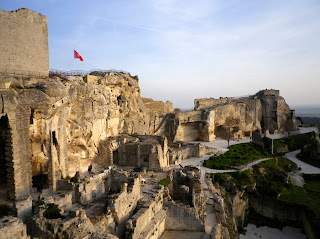 A bit of advice on visiting. If you must go during the summer months, I strongly urge you to go either very early or very late in the day. If you wish to see the castle, I would suggest the latter as the ticket price is greatly reduced one hour before the official closing time and once inside, you are welcome to stay as long as you like. And that, my dear friends, means that if you plan wisely and tuck a bottle of rosé in your sack, you may have one of the finest apéros imaginable with thousands of years of history all to yourself.
Posted by Heather Robinson at Thursday, September 01, 2011