Talking to the stones 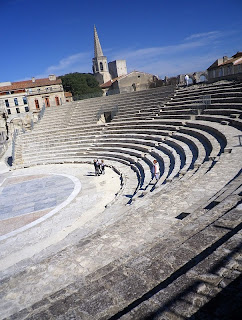 Call me jaded. Spoiled if you prefer. It isn't that I don't appreciate Arles' many amazing Roman monuments, I adore them. It is just that I spend so much time amongst them that I tend to not think on their history; I don't carry it around in my pocket. I pass more time admiring their bones. Just another extension of my love for patina, I suppose. Not to mention that I find in their age a sense of comfort and calm for they are worn but beautiful.
At the entry to the Théâtre Antique this morning, the pin-striped blonde gazed up at me with an erased expression as I handed over my passport as well as my free entry pass to the monuments that all Arlesians are entitled to have. She handed it back to me in silence. "C'est bon?" I finally stammered. She blinked. "Oui." I do hope that she is more charming with her paying visitors.
Ben was with me, welcome as long as he is on his leash and soon he was scrabbling ahead over the pock-marked plaza encasing the arched remains.  The Antique Theatre was edified in 1 BC as part of an effort by Emperor Augustus to develop the urbanization of what was then called Arelate. And what a project it must have been. It was one of the very first such Roman theatres to be built entirely in stone and the cavea or hemicycle could hold ten thousand people! For those of you that know the theatre in Orange, it was just as large, if not even more ornate in its presentation. Alas, time was not nearly as kind to our theatre. By the 5th century AD, the stone was quarried for the construction of a Christian basilica, one that was located where St. Trophime rises today. Along the back wall of the stage, hundreds of columns lined three levels, only two of which still stand. Of the statues that filled the walls niches, happily, the Vénus d'Arles was dug up in 1651 and offered to Louis XIV. Today, she is one of the Louvre's stars.
By the 7th century, the walls they were a'tumblin' down. Housing for the towns ever expanding population spread across the area. Miraculously, the Jesuits established a college, one later occupied by the Souers de la Miséricorde, in which the two columns were left untouched in a courtyard. Further archeological finds were added to the small garden and it was opened to the public from 1755-1789. The theatre was slowly uncovered starting in 1828 thanks to the efforts of then mayor, the Baron de Chartrouse, who was the first to rally around the importance of saving Arles' historic monuments. In 1981, it was listed on UNESCO's World Heritage List, guaranteeing its protection well into the future.
Can you hear the Roman ghosts calling in the orchestra? As much as this former actress would like to think so, I have to say no. It is just the twittering of birds and tourists that fill the air. But what a bunch of beautiful dust. While a group poses on the proscenium of the stage, Ben and I climb up to meet the sun. Ben loves this, me less so but it is worth it for the breathing space at the top, the view opening beyond and on to the neighboring Arena. Amazing to think of the cries of the actors mingled with the shouts of the gladiators in Roman times. The audiences wandering between the two in an overstimulated daze.
I am always moved by the details, the carving that has been nearly smothered by the wind, column bases giving only the barest of hints of former glory. Amazing to imagine its height doubling upwards from where I sit. As I have mentioned in previous posts, the theatre is still used for many events. But that is superficial, just traipsing figures, passing shadows. So in the morning light, I sit with my sleeping dog and talk to the stones, hoping that they have some wisdom to share with me. 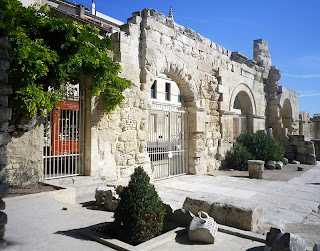 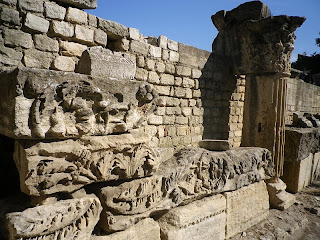 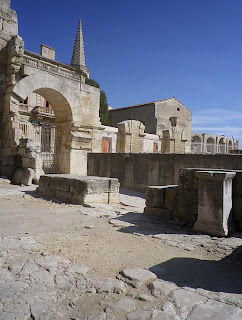 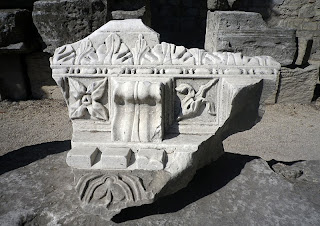 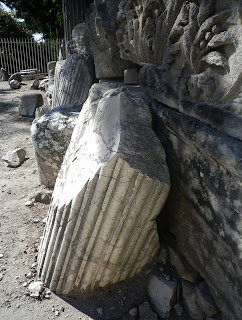 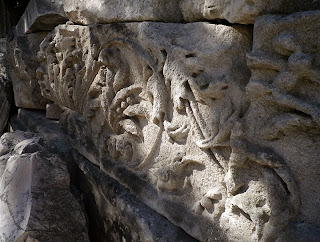 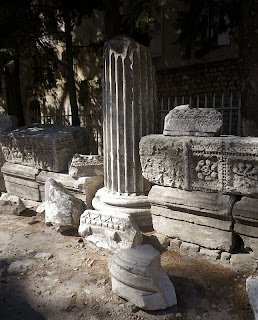 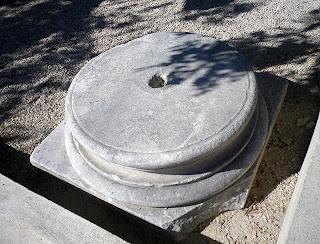 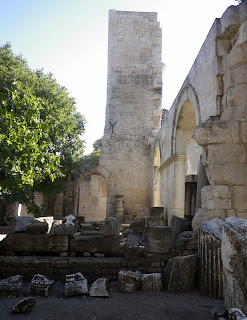 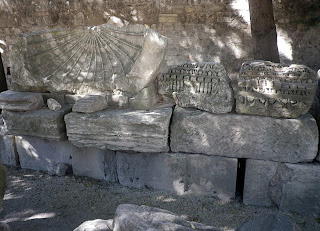 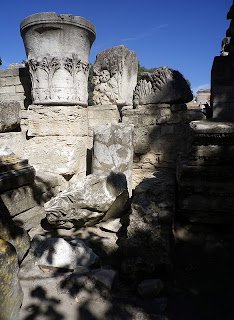 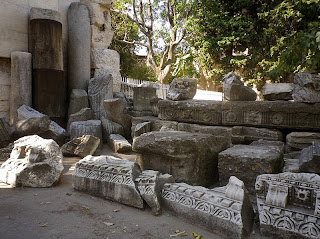 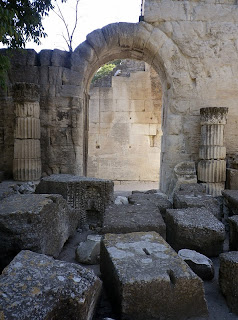 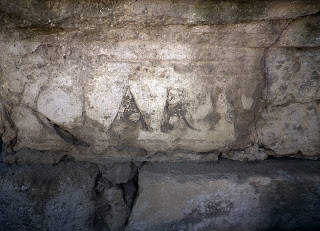 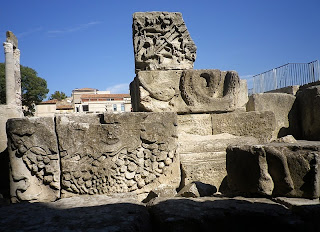 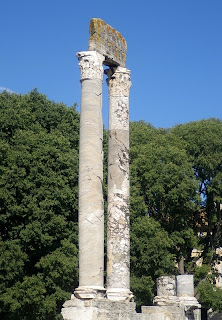