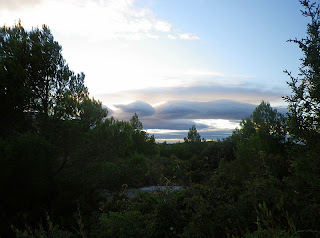 A fight was brewing. Remi and I could both feel the little sparks of crankiness flowing between us. It had been a long weekend full of work and planning. Even our little idea to return to one of our favorite antique shops had been spoiled, we were too late. Nothing was working out right. We had hopped in the car in hopes of forcing things into shape but no. Crazy drivers seemingly attached to our bumper only made things worse. Sparks threatened to flame into fires. 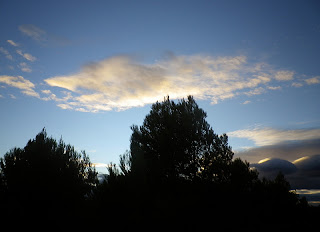 Luckily for us both, we just out and out fessed up to what was happening and whoosh--all of that stress just flew out the window like a balloon. Funny that, how giving bad behavior a name can make it look so foolish that it runs away with its tail between its legs. 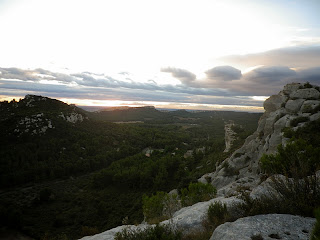 So we let go of the throttled fun and just took a look at where we were. Well, happily we were in the heart of the Alpilles. Remi suggested a fail-safe idea, to take a walk along the cliff facing Les Baux des Provence, one of the most picturesque villages in France (that I wrote about here). Ooof. I must have still had a couple of neutrons of nastiness zigzagging through me as I was ready to whine about the wind being too strong, too cold. I took a quick mental inventory of Francine Gardner's recent post about climbing Mount Kilimanjaro and felt foolish. We all know that the very first rule of travelling is no whining. 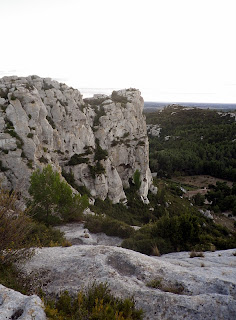 Soon enough, we pulled over, Ben, our gorgeous Golden, was freed from the back and we were scraping along over a trail that is not a trail but stone marked with wagon wheels of who knows when. 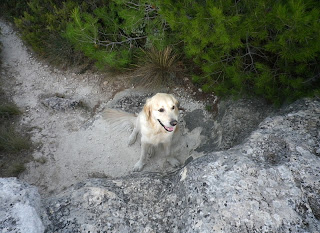 Occasionally Remi and I jumped up to get a better view, leaving Ben below as a brave lookout. What was going on with the clouds? They were what I refer to as UFOesque as they were more than slightly suspicious in their perfect hoveringness. 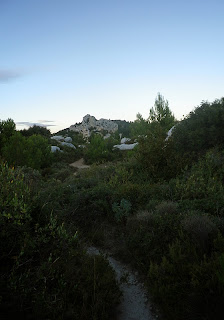 Remi has more of a hunter instinct than our Golden. His head lifted up and with a turn of the head he mumbled to himself "Is the light going to descend below the cloud?" or something to the effect. I lost the end of his phrase as he had broken out into a run, chasing the light. I have to say, I love when he does this, I find it so hopelessly attractive. 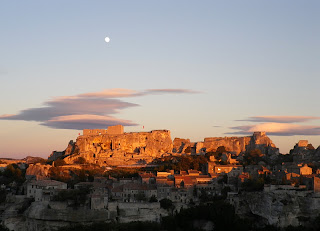 Ben kept returning to find me on the trail as if to say "Hurry up!" When I finally descended down towards our favorite spot, I saw that the light had expanded into a giant flaming veil hovering across the village. And with a nearly full moon, rising just above, well, well, well. 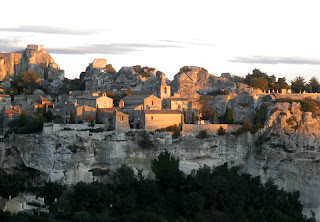 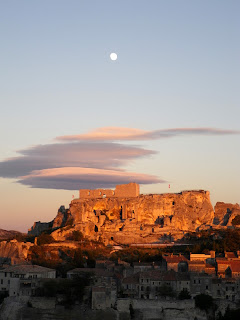 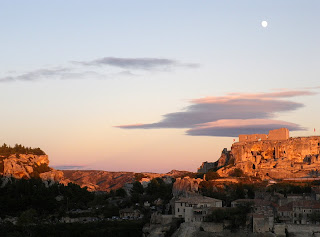 Like Remi, I started shooting like mad--however with my tiny, forever disappointing Pentax. Ah, save for when the light is absolutely perfect. For some mysterious reason, then it seems to snap to and try and deserve its place in my hands. So alive, so alive the light...gorgeous and then...gone. 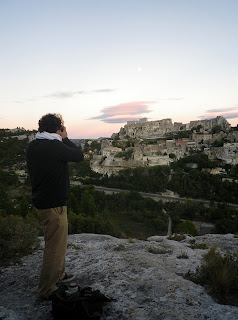 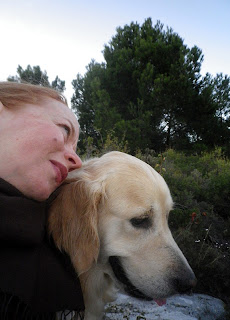 Now, when you are the companion to a photographer, it is best to learn about timing. And time. Because, as you have already most likely understood, all of the delays, the miniscule hesitations delivered us to right where we needed to be at exactly the right moment. We saw something extraordinary. Remi kept seeing it, as he always does and I leaned up against trusty Ben to stay warm. 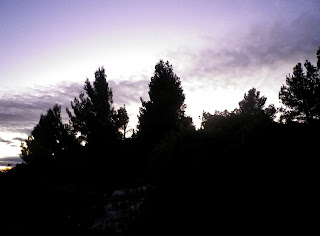 The sky waxed violet and gray, what an elegant combination. Very Oscar Wilde. I paid attention to the pulling at my ear to finally hear the pines telling me to shut up. I promise that it wasn't more polite than that! Shut up all of those thoughts rocking through your head. Just be patient and wait. Because a photographers day isn't finished until the very last ray slicing across the horizon (and sometimes not even then), so just be happy to be where you are. There isn't anything better than this, just this. Remi's birthday is tomorrow. I felt this experience was a little gift, in advance from the Powers that Be.
Happy Birthday, sweetheart. 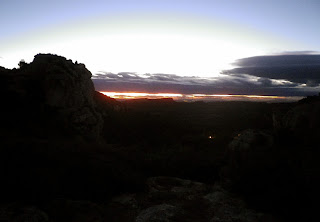