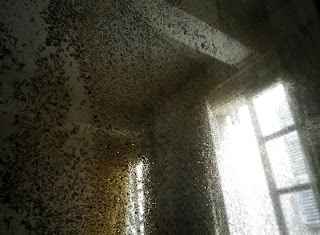 I watched two couples sitting directly across from me at different tables while dining out in Aix. The first was quite young, very hip. Each held their Blackberry in hand and texted away while waiting for their food to come, at times giggling separately over some funny exchange they were having. The other couple, perhaps in their forties with a young baby in a stroller at their side, sat staring off in to space, the man with a slight lift to his chin as if to say that he was literally above it all, the woman slightly slumped and gazing at a far away point on the cobblestones. "They must be fighting, "I thought to myself. But no, I realized as the meal progressed, that was just how they behaved together as when they did speak they were quite amiable. Two couples, both together and yet completely disconnected.
Is it just a symptom of our current culture? To be connected virtually en permanence (and by that I mean cell phones, the internet, the whole shebang) as well in the life where we live and breathe. We are carrying around two worlds on our shoulders and even Atlas would have had to struggle under the weight.
How many blogs do we follow? How many comments do we leave? How do I feel about the activity or lack of it on my own blog? These are certainly questions that I never thought about until a year ago and as I actually have the luxury of time at this phase in my life they are not usually pressing ones. But I wonder for others, are choices made? It is certainly simpler, more accessible to keep up our online friendships. I am frequently delightfully surprised by the generosity of spirit that I see on blogs, including on my own. Is it becoming easier for us, in this day and age, to open ourselves up to people that aren't actually there in front of us? Not that my sentiments aren't genuine in the virtual world (far from it) but I do rush the process of getting to know someone (assumptions abound and I have found myself guilty of making them as well). I can run leaping with open arms in a manner that would be impossible in face to face time.
Conversely, I feel that the traditional idea of friendship is pulling back on itself, like the exposed belly of a snail that has been touched by a pinkie finger. Granted that could just be my age. In France, couples in their forties tend to get together only with other couples who have children the same age, which seems less about friendship and more a communal baby-sitting. Again, a matter of convenience. I have come to see that what can pass for friendship today is at times an extended, more sociable form of acquaintance.
If you give of yourself, you give freely but it currently seems that often, not always, the receiver of those affections, efforts, what have you, no longer feels the need or impetus to return said energy even in the smallest way. It is now socially acceptable just to take and I can't help but think it is linked to the same disconnection mentioned earlier. Tightly wrapped, each in our own bubble. Do we value each other less now? And the importance of shared experience? I know that personally, my interactions as of late have left me disappointed and yet have increased my need to feel liked (my own juggernaut). Remi and I have had some good conversations about all of this and what we actually need from relationships at this point in our lives. Less is more and quality is the divider of the equation.

Does it just come down to time, finally? This shift? One of the many reasons that I cancelled my Facebook account was that I was tired of living off of the scraps of friend's lives. Anecdotes do not a friendship make in my book. I see repeatedly on blogs throughout the internet that people feel like they are desperate for more time but where has their time gone? Is it just due to additional work hours? I am asking genuinely (so no attacking please), from the point of view of someone who has admitted to having time because I see that in France people do actually have free time but not necessarily the desire to share it. Either way, this vacuum has to have an effect on the definition or even the possibility of true friendships. Has technology filled the gap? Are we creating a virtual experience that is impossibly more appealing than reality?

I know that I am asking many questions but I have a few more: do you feel that you have as many close friends as you used to? Are you spending as much "face time" with them? For those of you that have teenage children, do you see them connecting with their peers and constructing lasting relationships?
My Mom was having trouble with her phone the other day and despite repeated attempts, we soon understood that conversation that day would be impossible. She could hear me but I could not hear her and so I was left to tell her that I love her before saying, "Good-bye" in the void. She sent me an email a few minutes later, a quick reply to say that she loves me too.