A First for May? 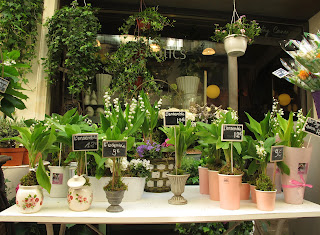 Time seems to be galloping along with all of the fervour of the horses participating in the Fête des Gardians. I keep shaking my head in disbelief that we are at the beginning of Month Five of 2012 but here we are with a holiday to prove it. I try not to repeat myself (even if I don't always succeed!) so I will let my newer readers take a look at my previous entry about this holiday if they feel so inclined: May day! May Day! 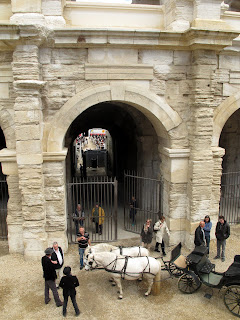 What makes this years event so special is that it is celebrating the 500th anniversary of the Gardians, our French cowboys. Five hundred years! Yes, at times I can understand the comments about America being such a "young country." 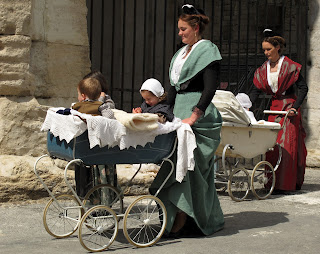 For the first time, the morning mass to bless the riders and their horses was held inside the Roman Arena. Such a strange mix of sacred and profane slightly boggles my mind but so be it. 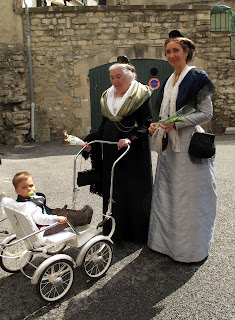 As the Arena's ancient stone stairways are steep, all of the recent mother's were forced to stay outside the gates and push their antique prams patiently in the strengthening sun. Tiny faces peeped out from underneath crocheted caps and lacy bonnets. 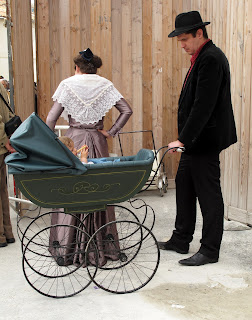 As always, I delighted in the swish of the women's skirts. The art of the Female Female. 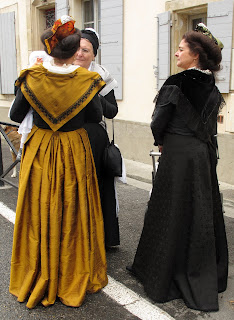 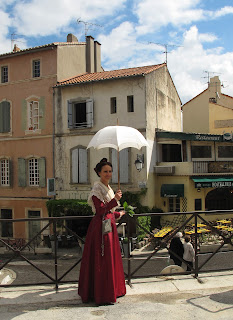 The surrounding streets were filled with weaving and wandering visitors. Russian, Spanish, Japanese and Italian bumped up against over the French voices. While the First of May is a national holiday in support of worker's rights, it is also the beginning of the high tourist season. 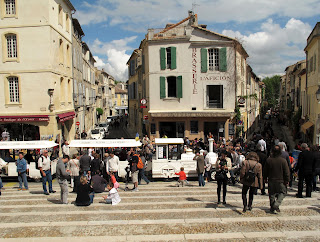 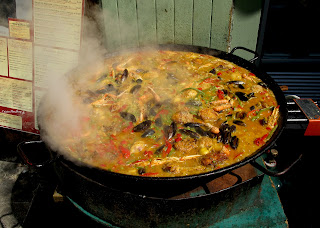 The Place du Forum was already filling rapidly as I descended the hill with Ben. As with every festive occasion here, several paella's bubbled in massive iron pots around the square. But for us I wanted something as gentle as the Lilies of the Valley that are the token flower of the day and so whipped together an eggy mess to make a wild smoked salmon and asparagus quiche. I hovered over it after I pulled it out of the oven in its pre-de-puffed state, inhaling deeply. Patience is not my strong point, non. 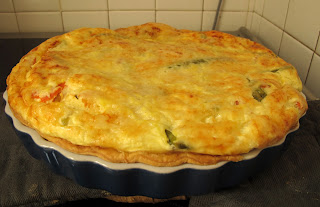 And yet I haven't been able to relax into this festive day completely. There is an unexpressed tension in the air about the presidential elections that will take place this coming Sunday. We have already been through a wearing first round that resulted in an alarming support (18%) for the extreme right Front National party with Arles coming in at 25% and nearby Saint-Gilles at 45%, the highest in the nation. While I have long appreciated the long-standing traditions that are held so dearly in the region, I hope with all of my heart that this election will take a turn and move swiftly towards the future. That this pleasant First of May can be a harbinger of hope to come.