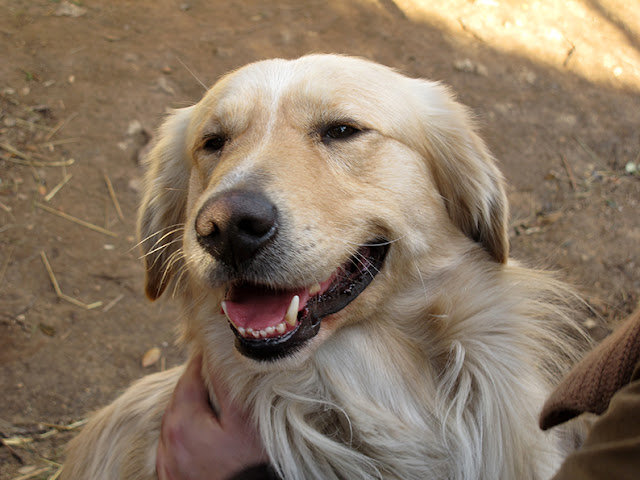 Ooh, I am so sneaky. I have a really, really big surprise for you all: we have adopted a dog! His name is Kipling. 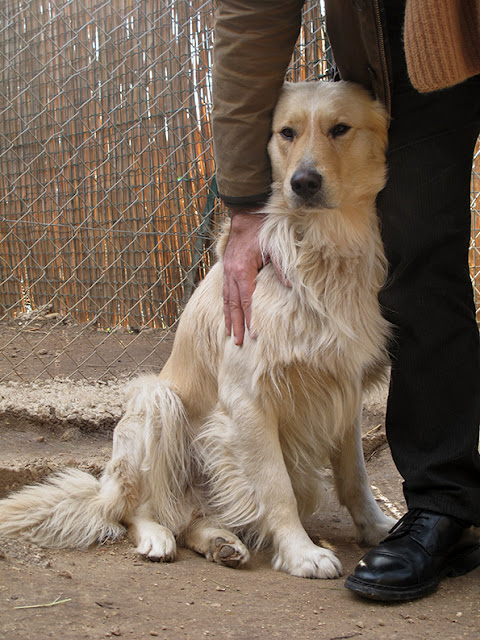 As stories go, this one came entirely out of the blue and was a bit bendy just like life.

When we went up to Grenoble recently, Ben stayed with his beloved pet-sitters Camille and Guillaume, a young couple who met as they are both volunteers at the S.P.A. des Baux de Provence (no not that kind of spa, people, it is the local version of our ASPCA). When we picked Ben up, Camille casually mentioned "Oh we have a dog that could be Ben's sister at the shelter right now." My jaw dropped open, I had to know more. Golden Retrievers are not nearly as popular in France as they are in the States and I can assure you, you never see one up for adoption. Ever. I have long hoped to get a second Golden as a companion for Ben but alas, the 1000€ fee to buy a puppy was prohibitive. This rare opportunity was one worth exploring and so a rendez-vous was set for us to meet her the following Saturday.

However, you can't force these things and there was absolutely no spark or connection with this pretty girl for either Remi or I. And worryingly, she has a wide sway to her gait plus a back leg that points out that made me fear that she has hip problems, something which would pose a challenge in our second floor walk-up plus we knew we couldn't afford to bring in a dog with special physical needs. We said our good-byes, knowing that she would be soon be found by the family that was right for her.

Guillaume took us around the facility to meet the other dogs in residence, an astonishing 140 in all (plus 80 cats, a goat and several sheep). The noise from their raucous barking was disturbing, their eyes, when pleading, heart-breaking. Then we turned a corner and in the holding pen for new arrivals was...a very beautiful dog...a Golden/Collie mix. He was frozen in fear and as we approached, he started to shake. Guillaume, who hadn't yet met him, went in to his pen first. The dog immediately took refuge at his side, as he did with Remi after. A paw was offered, eyes closed, looking for a bit of peace, to forget where he was for just a moment. 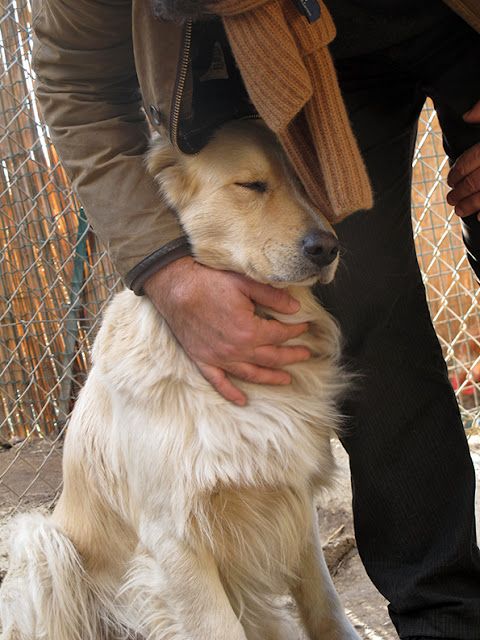 He offered me the same gesture, repeating it as we headed out with him for a walk. Here, was a dog of utter sweetness. Just like another we know... 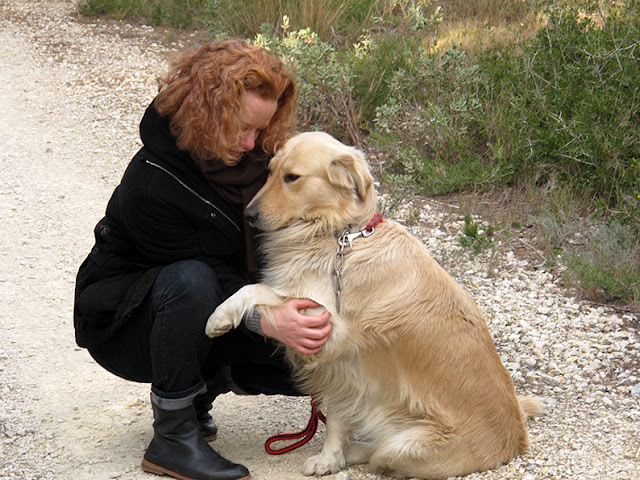 When I sat down, he tried to crawl into my lap. 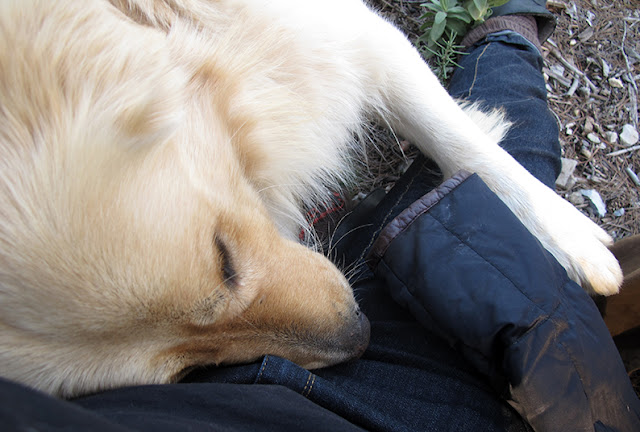 Our hearts were thumping in our chests but we knew that before even thinking ahead, we needed to make the introduction with Ben. But we did put down the option to be the first to be able to adopt him if he wasn't claimed during the ten day holding period. 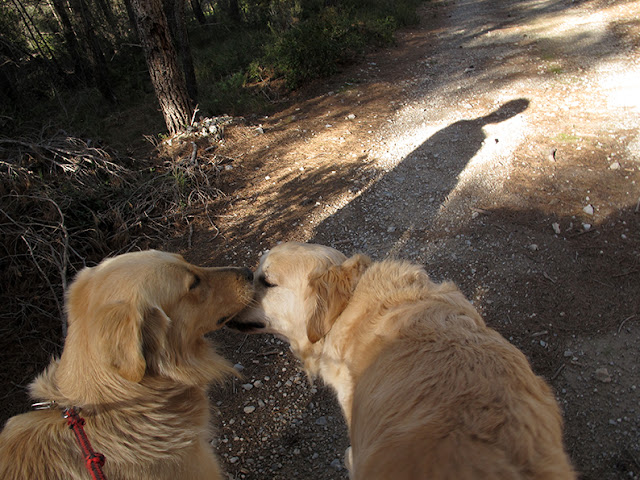 We came back out with Ben on a Wednesday and followed the advice that my friend and wolf-photographer Jeff Snyder, who is experienced in these types of situations, gave on how the moment of meeting should take place. Sniffing occurred and we kept walking... 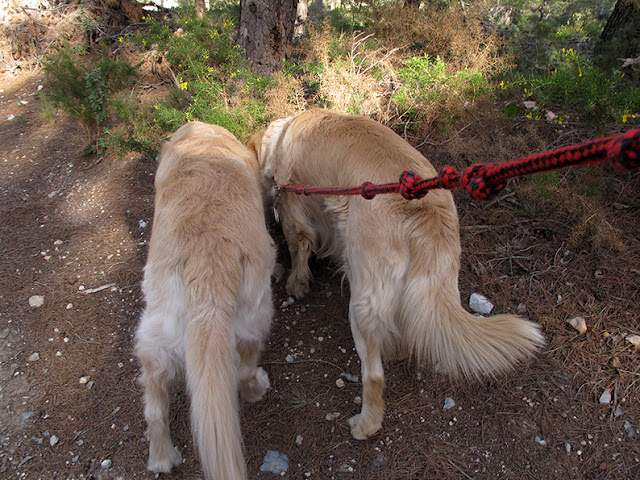 We all were amazed to see that their coloring is exactly the same. Can you tell who is who? 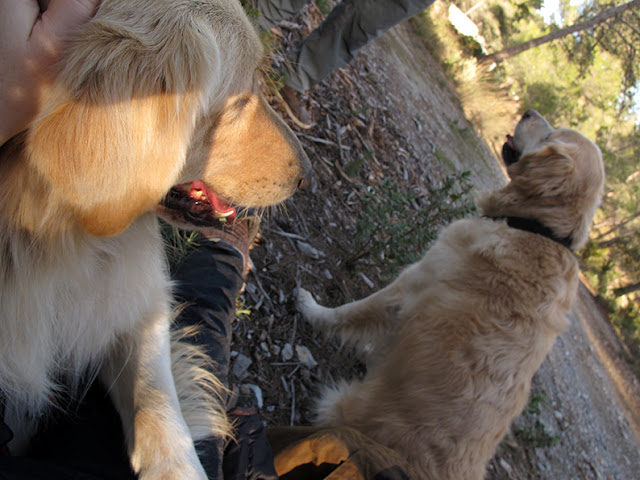 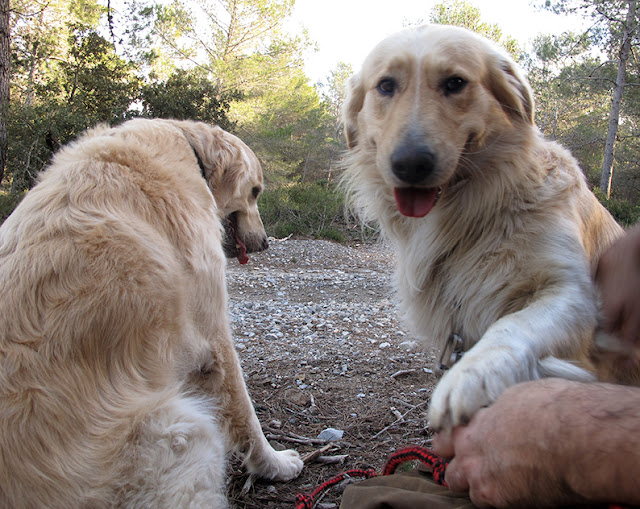 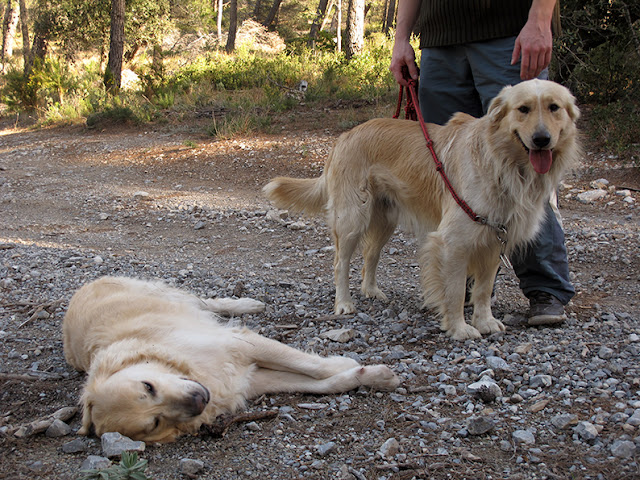 Yes, this wonderful dog, even in the very reassuring company that Ben provides, still... 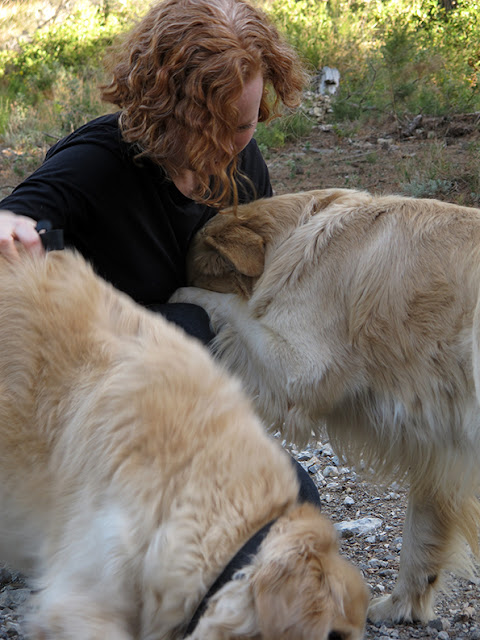 ...needs to seek safety and comfort... 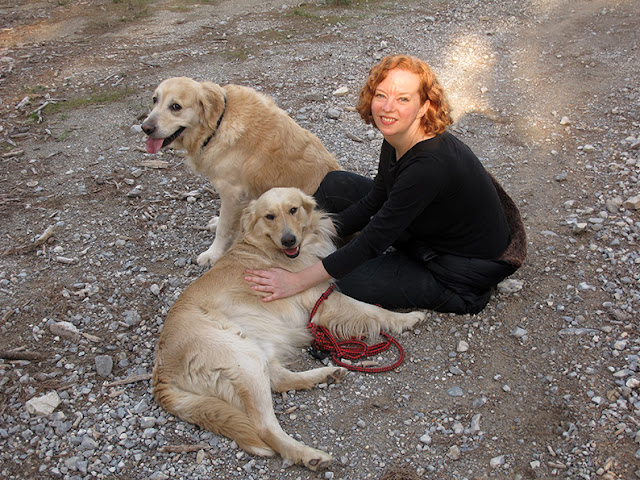 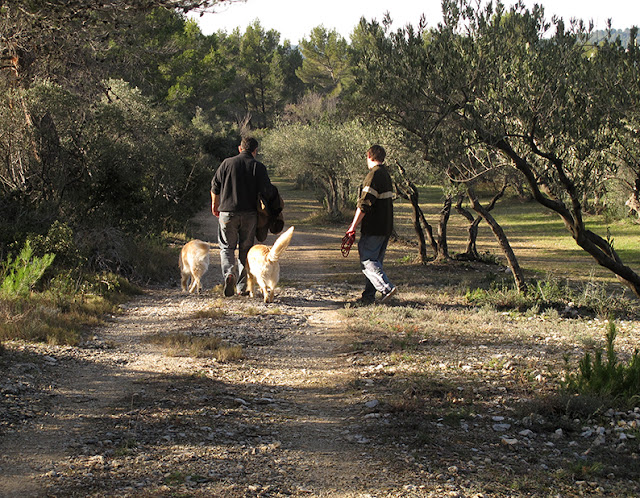 ...that they were willing to imagine being friends...


Fast forward to our second visit with the dog, who we have already started calling Kipling. It happened naturally and immediately. I looked at him and "Cali" came out, which sounded too feminine. Remi responded with "Kipling" and that, really just rang true. For despite his timid debut, he is a dog that is very...brave. He is simply shell-shocked as he should be. Kipling was found outside of the biggest supermarket of Arles, waiting patiently for his owner to come back. According to what we have learned, he might have been there for nearly a week. Waiting. He was not claimed, nor does he sport a tattoo or microchip to take him to his former owners, let alone a collar with any indication. We even went to ask around in the area where he was found. Such an incredibly sweet dog, how could he have been abandoned? 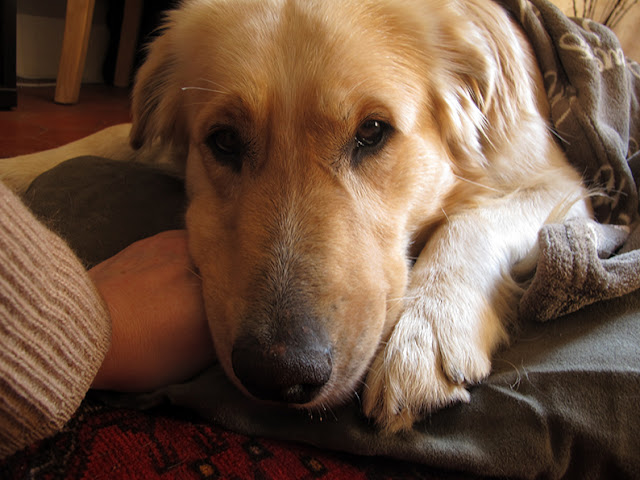 We might have found the reason during our second visit with Ben. When Kipling finally had the confidence in us to roll over on his back, feet in the air, Remi found a very large lump on his lower belly. It scared us to pieces as perhaps it did his previous owner. We spoke with the Director of the shelter, who felt that as the lump was completely soft, it was not a malignant tumour. She promised us that, whether we adopted him or not, she would have it examined and taken care of as need be. Kipling, as he was now being called in the shelter, was already scheduled to have the operation to be neutered, the vet would do what needed to be done. We waited on pins and needles to hear what was the verdict of the lump.

It was an intestinal hernia. A very large one. I will let you look up the details of that on your own if you are curious but what a weight on this gentle soul. And what a serious surgery for him to undertake on top of his being neutered.

We picked him up on Wednesday. All has gone very well so far. Ben has been a champion, the most considerate host and yet he knows very well, somehow, that Kipling is here to stay. The main challenge so far has been in keeping Kipling from pulling off his heavy bandage and ripping open his stitches. In order for that to happen, we need to keep a strict eye on him during the day (for he is trying) and to put the dreaded plastic cone around his neck the night, which he detests as is understandable. He also will only do his business while backed into a bush, which is a bit problematic as we live in the center of town where there is nary a blade of grass to be seen. But we will work it out. Kipling has been through so much in so short of time. I really give him credit for coming to us with such an open heart. 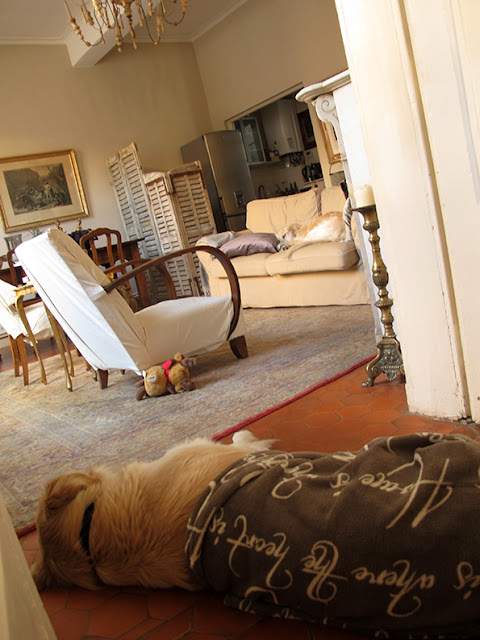 He seems to love both the hunter green cushion and the blanket that we bought for him on the run when the shelter called to say, "You can pick him up today after 2:30pm, yes?" Yes, we'll be there. 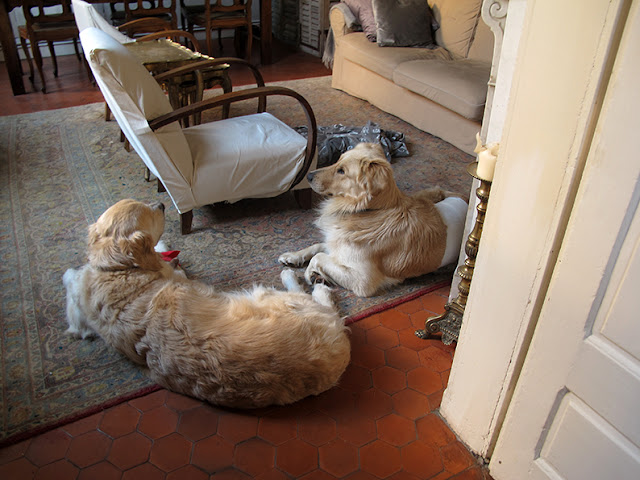 I bought his blanket quickly at Casa, an inexpensive home store that was next to the pet store where we bought his collar. I didn't realize until it was unfolded that upon it was written, "Home is where the heart is."

It has been a fascinating few days. All of the subtle negotiations between these two really beautiful dogs--both males of the same age--as they try to find their place together. Kipling, who, at times through the fog of his pain medication, wakes up with a start to know where he is and presses his forehead against my leg. We reassure him. Such tiny moments as Kipling touching paws with Ben are a big promise of what is to come...and last night there was even a few gentlemanly yet joyous attempts at play!

Remi, Ben and I are all doing our best to welcome him to our home and to our little family.

I know that you will all fall in love with him too. 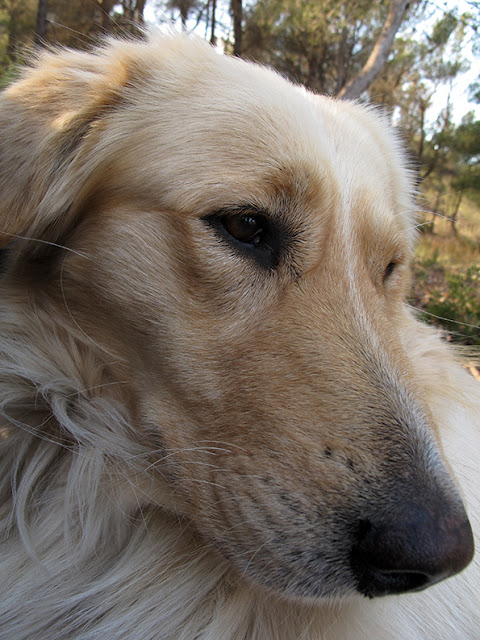 *Update: Swane, the Golden girl that we initially went to meet, has also been adopted*

I would like to extend a big thank you for the support and suggestions from my family and friends at The Gold Post (a must visit website for Golden lovers) plus of course, our deep gratitude to Camille, Guillaume and the volunteer-run and sponsored S.P.A. des Baux, which is a no-kill refuge.

Refuge Saint Roch, S.P.A. des Baux de Provence, home page
Other dogs at the refuge waiting to be adopted
What you can do to help

All of these links are in French but for those of you in the region, I know that they could use old blankets to help keep the dogs warm in winter. The S.P.A. does a great job with their visitors. They are walked regularly and we saw such love and attention given to them on each visit.