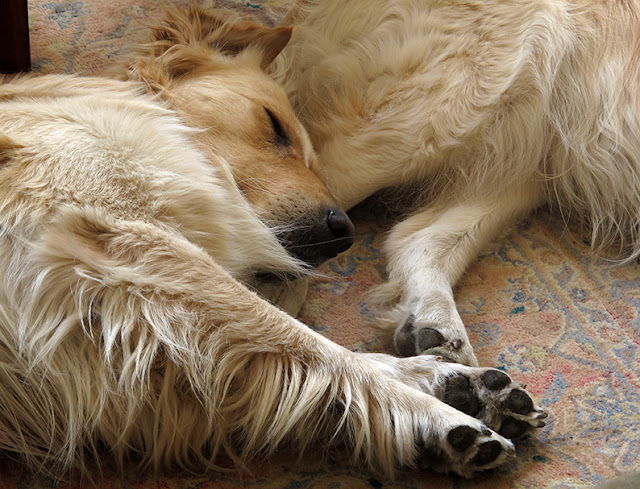 It is hard, nearly impossible, to think that we adopted Kipling four months ago. The scars tracing his belly where his horribly large intestinal hernia was repaired have healed and his coat has grown back fine, although not yet to his proud puffed chest of before. I see the time passing when I look into his eyes, those eyes that were closed tight to near slits with fear when we first met him and are now, only now, really open. Open with trust. It is beginning. And it feels wonderful. 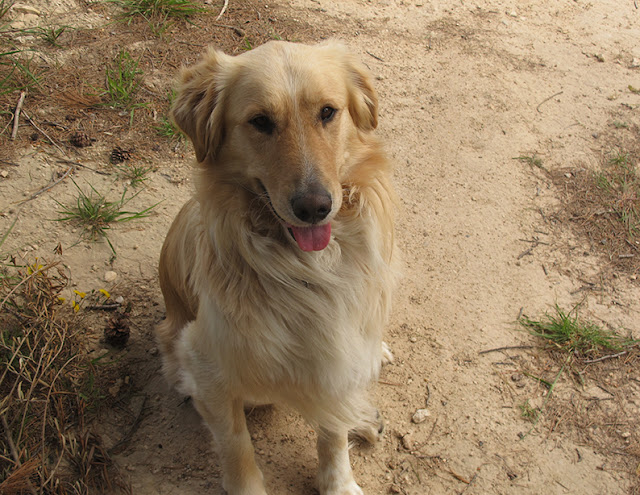 Remi and I still have peace to make with the fact that someone could abandon such a wonderful one. 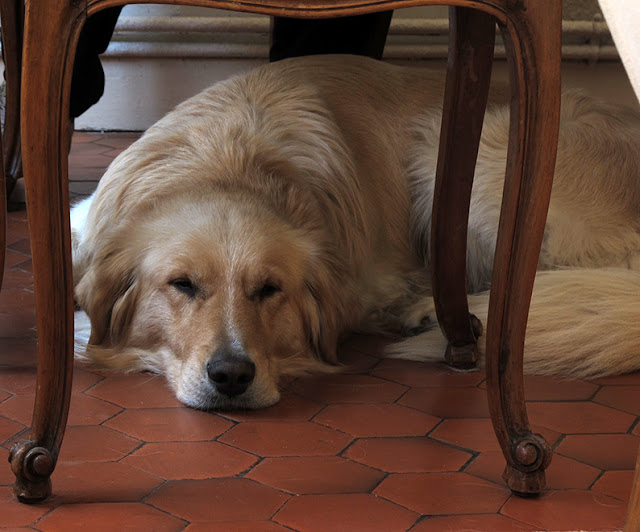 When he sneaks under the table at lunch and rests his head on my feet, I know that it is something that he did before, in his previous home. When he looks up at our bed with longing, I know that too is something he knew in his other life. So then, why? 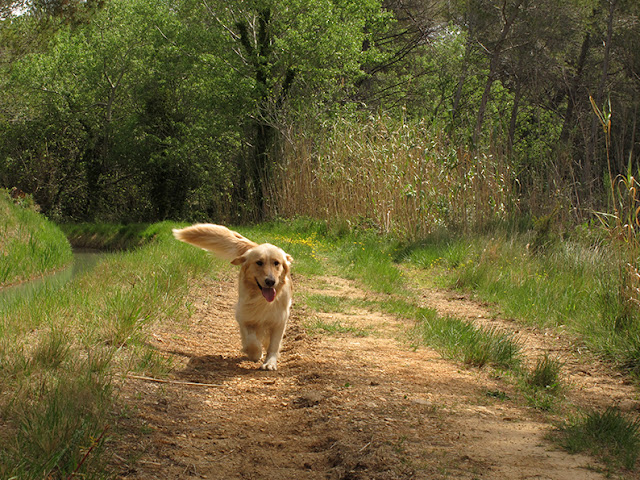 It is a question I am trying to let go of as the now begins to balance the weights of his past. I see him learning the ropes, again, with us. When we are in the country, how proud he is when he remembers to come back to us as he will go far so far ahead, at times too far, in big circles to the side so that we wonder if he was used in hunting to flush out game. And certainly, he licks his lips at our towns pigeons and strains to reach the cats. He is no angel... 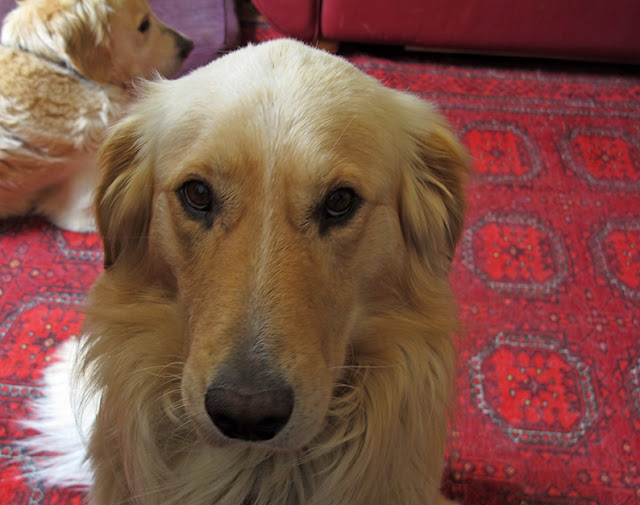 ...nor devil either. We call him coquin or rascal, it was Remi who started it, just like he was the one to choose Kipling for the adventure of it all. For who knows what happened during those ten days while he was waiting for his owner to come out of the shopping center? His front teeth are broken, making it nearly impossible to know his age--did that happen then? But he has, amazingly, retained a sense of humor, one he is only beginning to show. He would make a fine poker player.

All I know is that he remembers. I believe he would follow us to the ends of the earth. 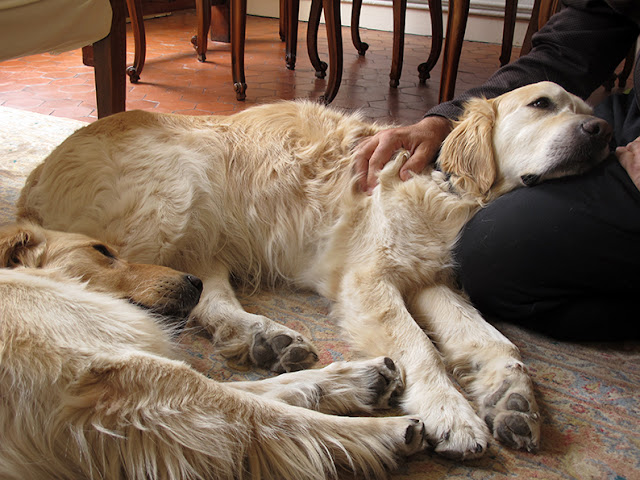 And Ben? Not to worry. Ben has all the love he has ever had... 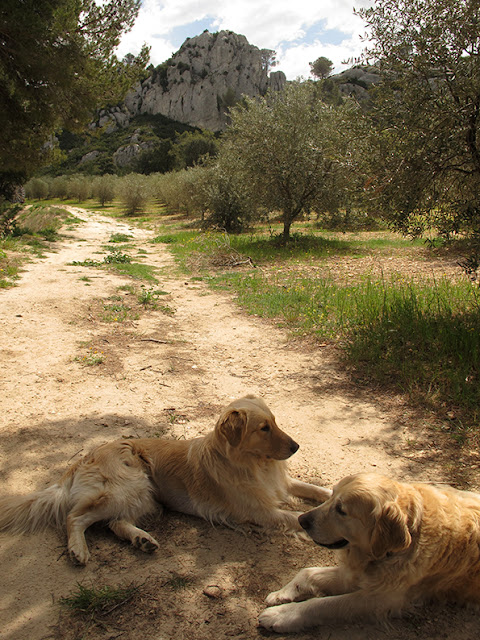 ...and is discovering what it is to have a copain to boot. For the first time. Learning the ropes.

It is never too late. 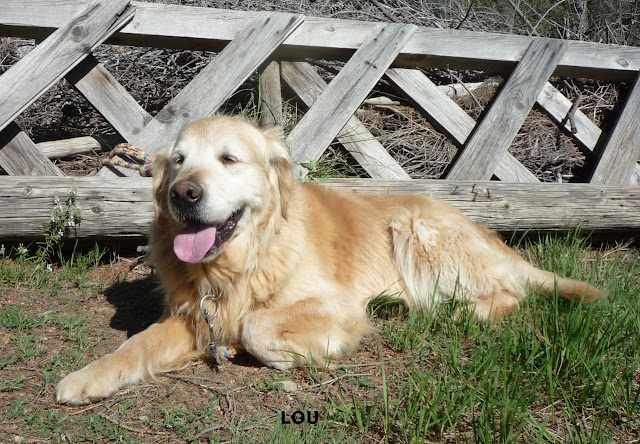 Mais oui, you did not think that I could end there, did you? Really? No. Because you see...well, I am calling out to mes amis français...oui, je sais que vous êtes la grâce aux statistiques même si vous ne me communique pas! Vous êtes nombreuses en plus...Are there any of you who would be interested in adopting this fine gentleman? His name is Lou and although he is ten, he is in fine form...Just think of all of the love that he could give! Look at that perfect Golden smile...I know that he is a special boy and if I didn't live in an apartment in town I would go all Bruce Weber and adopt a brood. For their love is spectacular I have to say....Camille, who told us about Kipling says that he is a sweetheart that gets along with everyone and everything.

If you are interested in having more information about Lou, please see: Here.

Many thanks to my friend at teamgloria for mentioning Kiplings adoption today. You can see her lovely portraits of her friend Richard and his Golden, Diego: Here.

For those of you that missed it, I guest-posted on the lovely idea of "Provence Time" chez the brilliant D. A. Wolf's "Daily Plate of Crazy": Here.

And for my friends in the States that are commemorating Memorial Day, I was deeply moved by the tribute that my friend NK wrote, especially as she is par norm a brilliant comedic writer so this is all the more surprising and beautiful: Here.