Spirit lighting up the sky 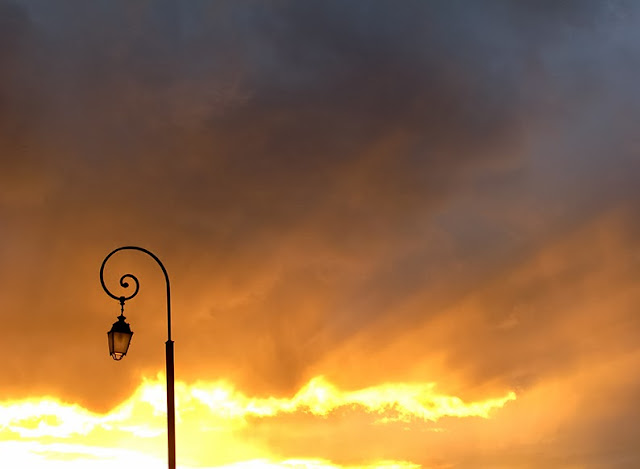 In 1994, I landed my first professional acting job. I was able to join Equity, the union for theatre actors and was thrilled beyond belief. I was set to play the role of Isabelle Dyson in Athol Fugard's complex and moving drama "My Children! My Africa!" at the South Jersey Regional Theatre. When I arrived, I  was introduced to my fellow actors - Maduka Steady, who is from Sierra Leone and Seth Sibanda, who is from South Africa, where the play is set. It sounds odd to say it now but at that young age, despite being surrounded by African-Americans in New York City, I had never actually met anyone from Africa before.

We attacked the rehearsal process with vigor. The days were long but incredibly rewarding. It was Maduka's first stage production as well (although he had previously appeared in the film "Lorenzo's Oil") and we both had much to prove. A friendly sparring arose, which was perfect as it was also the basis of the friendship that develops between our characters, both 18 year-olds - Isabelle, who is from a wealthy white family and Thami, an honors student from "the location," a black township. Each is struggling to find their place within the rule of apartheid and are further linked by the guidance of Thami's professor, Mr. M. Mr. M has pushed Thami hard and has the highest of hopes for the change that he can bring. He is a harbinger. The three hour play unfolds with the crackle of electricity in the air and that same tension was most certainly present in 1994. 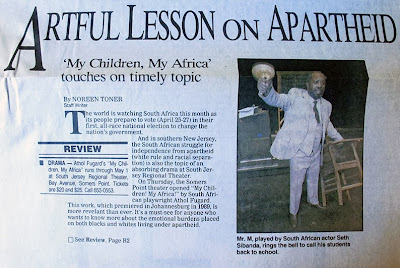 As is common in many small American regional theaters, the actors were put up together in a house. I was given the main bedroom, being the only woman in the production, while Maduka and Seth shared a room upstairs. In the evenings, we would eat together and share stories. I would often try to continue speaking in Isabelle's accent in order to master the difficult timber. Each time that I did, I would eventually stop and ask Seth how I was doing. His response was usually the same: "Very good for a  South African that was raised in Ireland and spent a considerable amount of time in Japan." We laughed so hard. 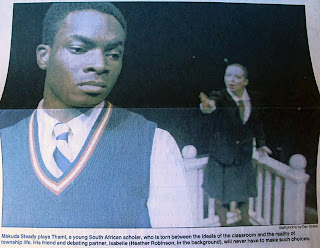 One morning when the show was already up and running, I was awoken by the sound of the television in the living room. Seth and Maduka were watching in silence. I tried to understand what I was seeing on the screen. Finally, Seth spoke, "He has won." It was official, Nelson Mandela and his African National Congress had won the elections. Apartheid would end. I remember watching Seth stand there, a gentle man but strong as a mountain. We didn't shout with joy or dance in celebration, there was too much history behind this moment. 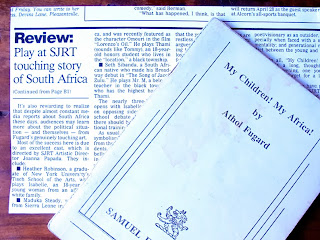 Of course, it was with great pride that we finished the run of the play, including performing as a benefit for Amnesty International. One evening after the curtain had fallen, I was about to head back to the house, tired after an especially bracing show. The stage manager called out to me, "Heather, there is someone waiting for you out front." I walked towards the young woman standing by the foot of the stage with trepidation. "Hello?" She turned to me and I could see that her eyes were shiny with emotion. "Um...hi...um...this might sound odd but...I just wanted to tell you something...that your performance...in this play...well, it changed my life...the way I have thought about things. I wanted to thank you for that." It was very brave of her to say and I thanked her in return. That comment - along with the exceptional experience of having participated in such an important play at such an important time - ended up changing me forever as well. 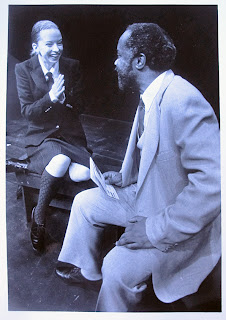 This morning, December 6th 2013, I pulled down my old script of "My Children! My Africa!" from a spot high on the top shelf of the bookcase. I had learned of Nelson Mandela's passing the night before. I was thinking to Isabelle's soliloquy that closes the play:

"...You gave me a little lecture once about wasted lives...how much of it you'd seen, how much you hated it, how much you didn't want it to happen to Thami and me. I sort of understood what you meant at the time. Now, I most certainly do. Your death has seen to that.
My promise to you is that I am going to try as hard as I can, in every way that I can, to see that it doesn't happen to me. I am going to try my best to make my life useful in the way yours was. I want you to be proud of me. After all, I am one of your children you know. You did welcome me to your family. The future is still ours, Mr. M."

Nelson Mandela made the world his family and made it a better place for us all.

Thank you, Mr. Mandela for proving the power of Hope.
May your spirit continue to shine bright in the sky.