An almost in St. Hilaire d'Ozilhan 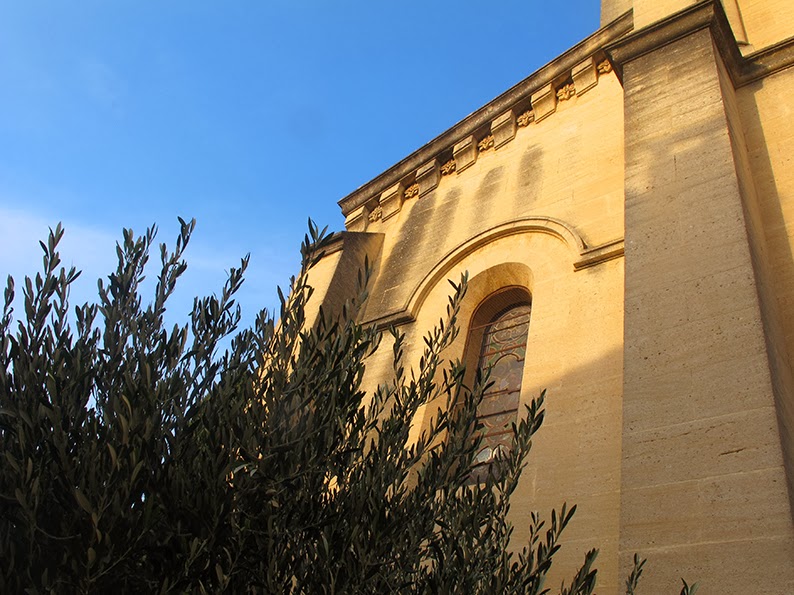 One thing is certain for 2014...we are going to have to move out of our current apartment before the end of June. So that gives us six months to cast our net far and wide to find something. Should we rent or buy? How far away from Arles could we stray due to Remi's work projects? Both of these questions remain undecided but we know from experience that the best thing to do in such circumstances is to dive in and start swimming... 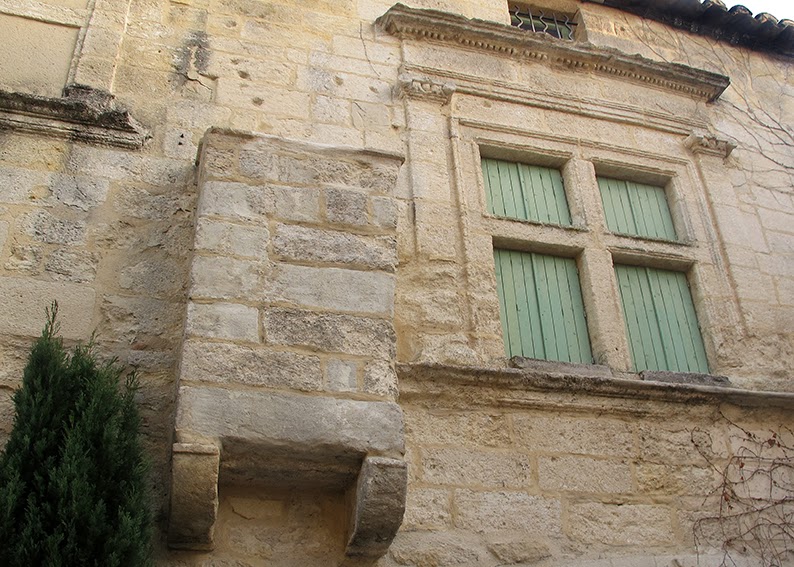 Remi came across a property in the tiny village (and I do mean tiny) of St. Hilaire d'Ozilhan, not far from Uzès. We both were surprised by the gorgeous Renaissance architecture present in many of the homes. Would that be the case for the house we were to visit? 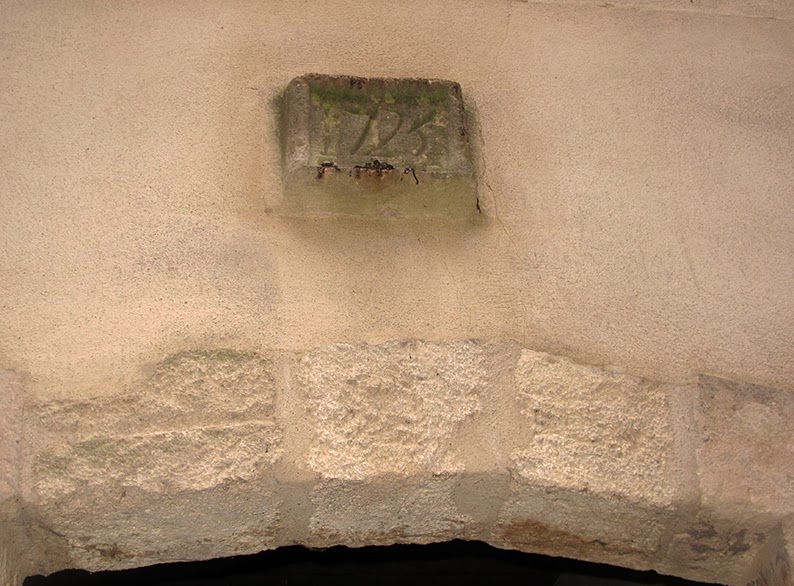 Well, as the garage (which we would make a fantastic atelier for Remi) dates to 1725, we knew that things were off to a good start. 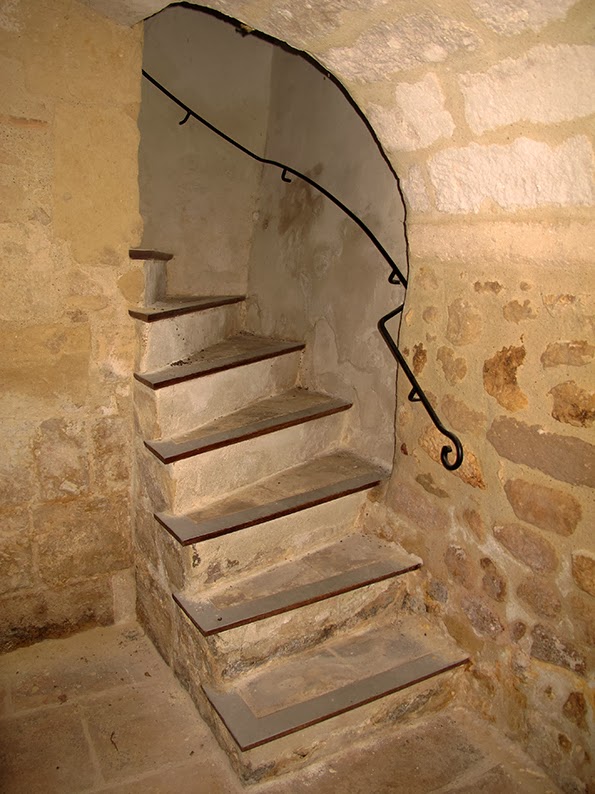 The charm of the spiraling staircase in the entry was undeniable. The house hadn't been lived in for years, one of several properties that had been "collected" in the area by a foreign owner who was now selling off the lot. And so cobwebs drooped and the stone walls had sucked up a fair amount of humidity but nothing that a good airing out couldn't cure. And speaking of walls, well, look at all of the unusual curves crying out one of my very favorite words: patina. 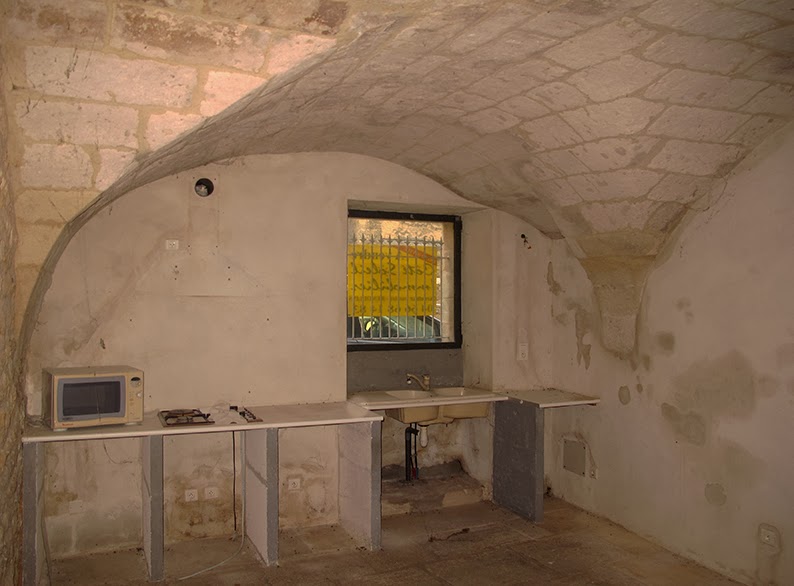 And the vaulted ceiling in the kitchen! Pitterpat, pitterpat. Oh my. It is far more beautiful than my flash-crammed photos portray (our visit was rapid fire and that shows in the "photography"--my apologies!). But I think that you can imagine what it would look like with a little love and care... 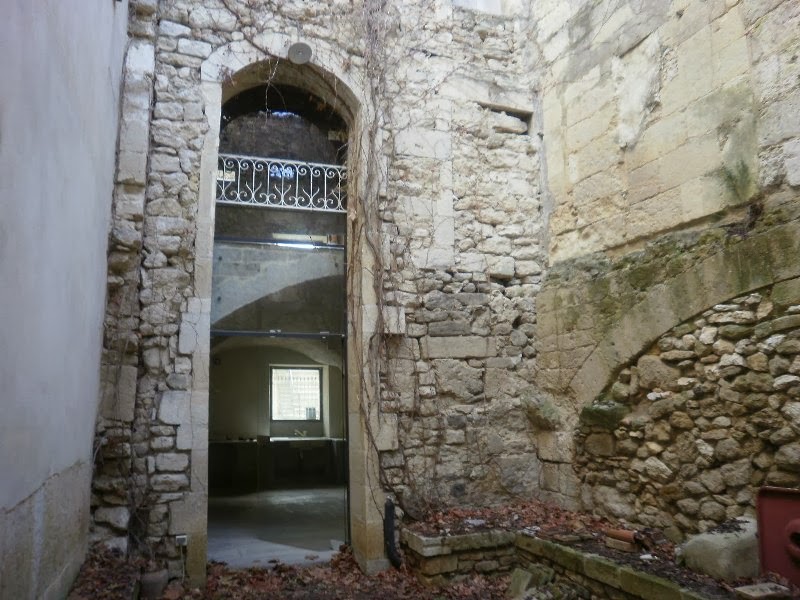 ...the same can be said for the small, walled in courtyard. Yes, that glass covered archway spans two floors. Could it have been part to a church? Read on... 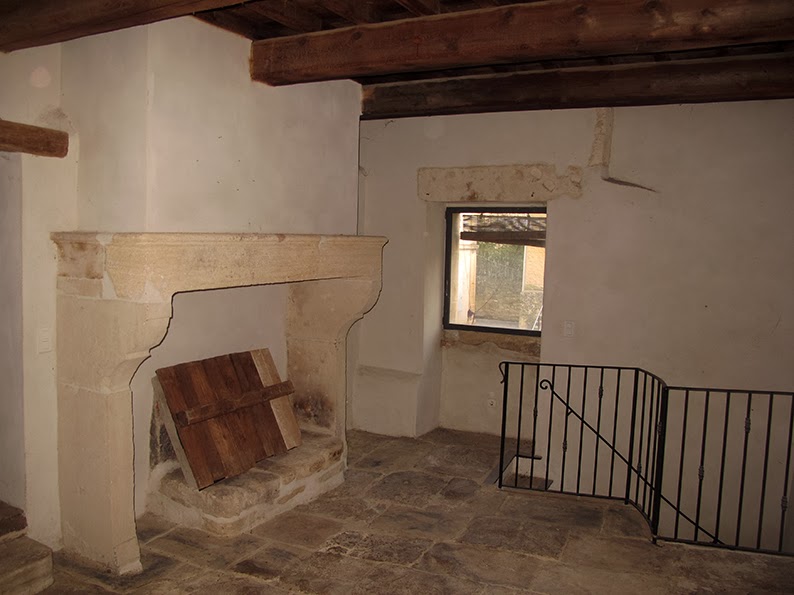 The upper level consists of two connected rooms. In the first is an impressive fireplace and the floor is covered by the most ancient stone dallage that I have ever seen in a home, anywhere... 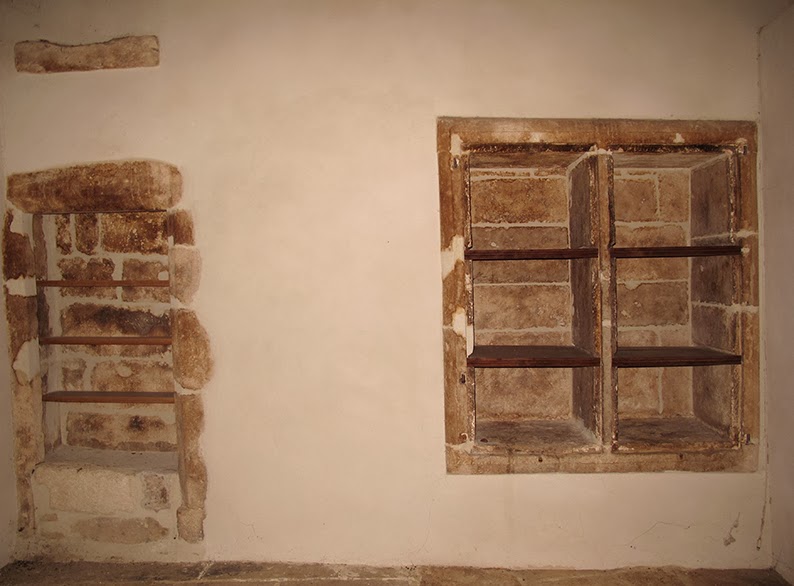 ...plus some truly interesting built in "shelves" that must have been either doorways or windows at another period. 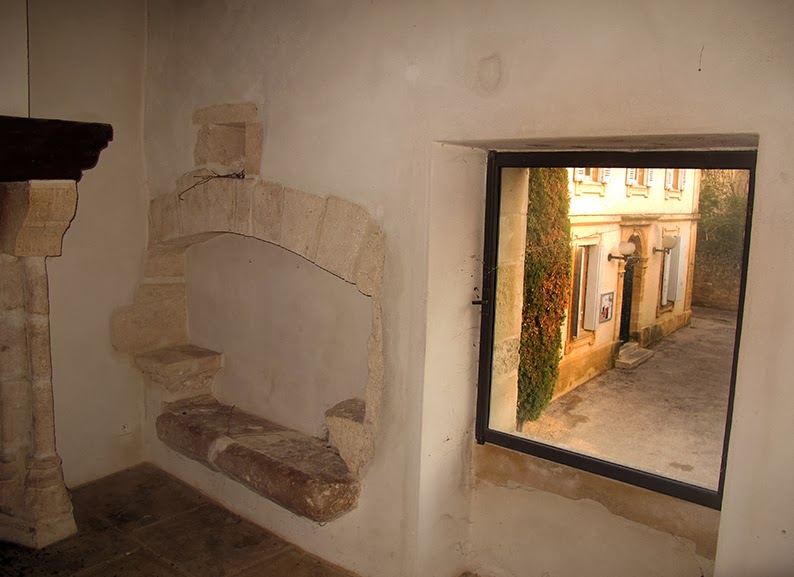 The second room has similar fascinating architectural details, such as this alcove made out of what appears to be a former bassin. 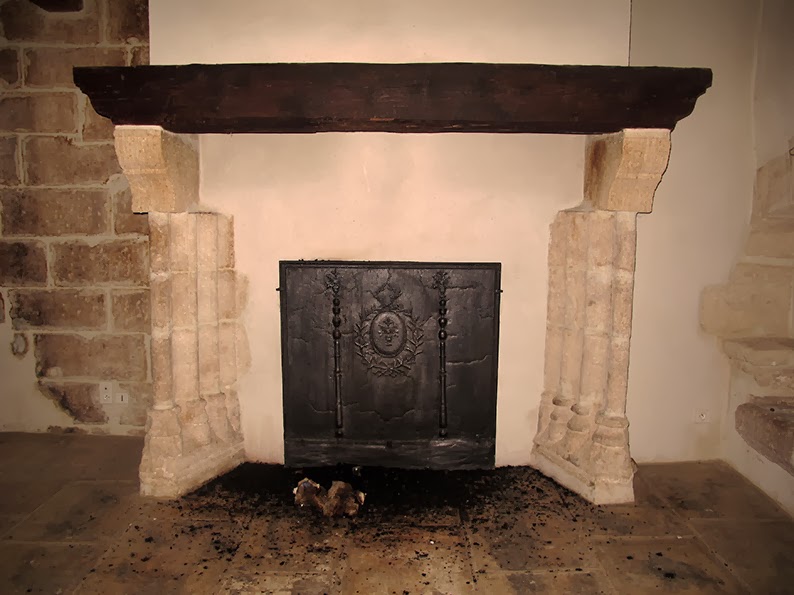 But the pièce de résistance is another, even more impressive fireplace. Take a look at the carved stone supports beneath the mantel. They most certainly look like the portals of a Romanesque church entryway to me! Incroyable. 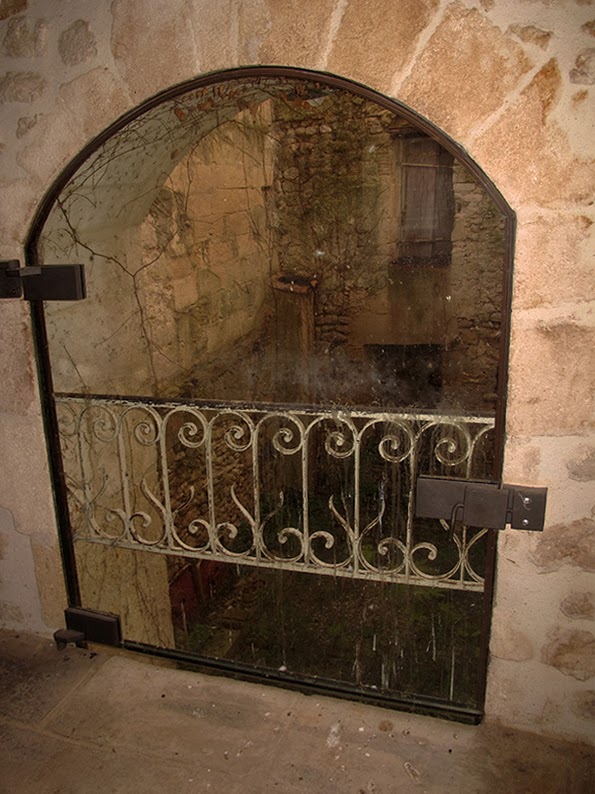 Opposite, a very large glass window overlooks the courtyard. Now, this photo has been provided by the real estate agent. Do you see the white square on the floor on the left? That is a trapdoor that leads up to the uppermost level from below. This entire floor has yet to be renovated, as you can tell! 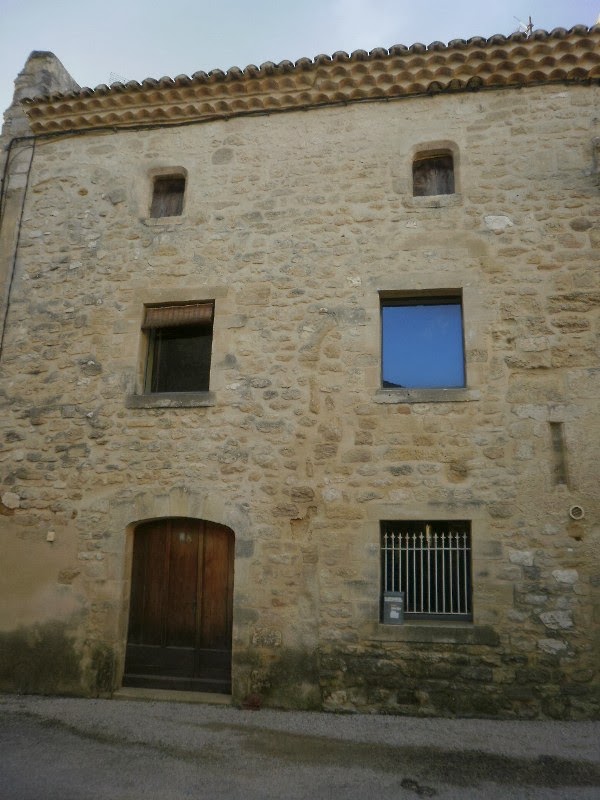 From the outside, the house has a very sober appearance, belying little of what lies within.

The verdict? Well, if you remember the title, this goes into the "almost" category. It is not for us. As crazy as we both were for many of the details, one does not buy a house for details! And it really reminded us strongly of our previous apartment in the 17th century hôtel particulier in Arles. It too had  a walled-in garden that left us craning to search for the sun. As exceptional as it was, lack of light was the main reason why we left. The feeling here - a weighty boxed in one - is exactly the same. Plus, it just isn't practical for us. If we converted the upper floor into a bedroom and bath, that would still mean only one bedroom, which, while fine for us (given that the garage could have been Remi's office, a must), means that it would be impossible to resell.

So, voila! Now, I won't show you every house that we visit (I won't breathe a whisper about the two that we saw after this one) but this was too interesting, too original to resist. I can still never get over the layers of history that we live with in France. It is beautiful isn't it? 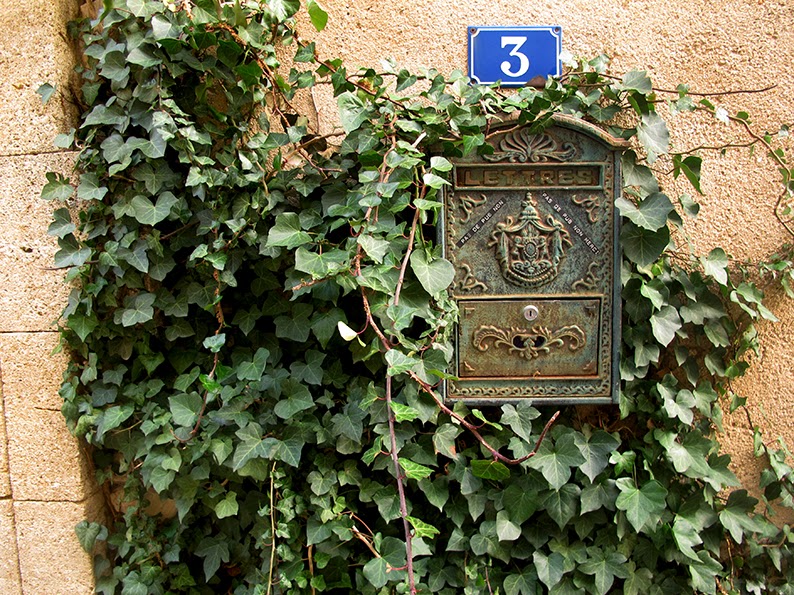 Have a wonderful weekend everyone.

And I also would just like to say thank you for sticking with me these past few weeks while I have been away. I really thought that I would have lost readers and I didn't. I most certainly appreciate your being here...un grand merci...