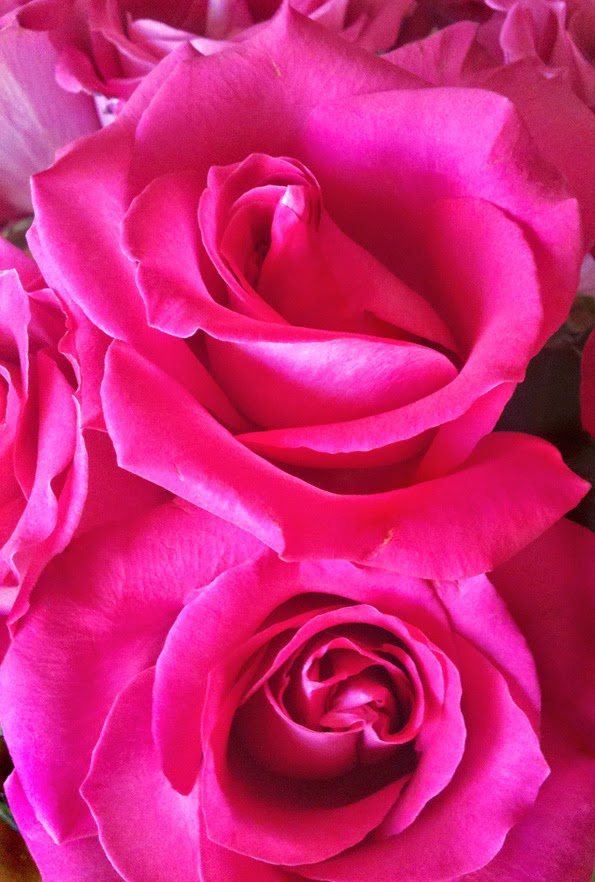 The color of the roses is making me dizzy. Leonard, my Mom's former fiancé and now husband, buys them for her every week. It is a habit that hasn't changed just because they have said, "I do." They are grocery store roses but that doesn't make the meaning behind them any less beautiful nor the curves of their petals any less fluid. My Mom lets me arrange them. "You are good at that...You get roses a lot don't you?" I look at her for a moment and then reach into the drawer for the big scissors.

Air France was on strike. When I mention it to people here in Michigan, I am met with an "Oh, really?" for it has barely bounced on the American news. And yet tens of thousands of people (according to Air France, the New York Times went for the more dramatic hundreds of thousands) have been stranded. I am one of them.

Of course, we knew about the impending strike before it happened, Remi and I. But still I had no choice but to take the plane for my Mom's wedding to Leonard, just as Remi had no choice but to stay behind. We couldn't afford to be two. And yes, it is France so there were jokes about the frequency of les grêves and the greediness of French workers, depending on who was doing the joking but in the end, the strike went on for fourteen days. No solutions were reached between the two parties.

Two weeks may not sound like much but I wonder about the many stories of what happened for others like myself. How many lives were somehow utterly changed because of not being able to get back to a place called "Home." I have been lucky, of course, in that I have the guest room to inhabit, not the blank walls of a hotel to shut me down and in. "This is your second home," Leonard often says. It is as generous as he is and he means it. Their love and kindness - along with that of my Sister, Robin, who lives a half hour away - is as profuse as the perfume from a technicolor bouquet. I lean in instinctively to catch the ghost scent in remembrance.

I prick my thumb while cutting the stems. A grimace and a swear escape. I should know better for I do love roses. My mind must be wandering. Back to Provence I suppose, back to Remi and the dogs and that other Home, the first one, that I was only just beginning to know three weeks ago.

On my cell phone are little pictures that I return to, something like memory paintings. Olive trees, tails wagging. Instagram talismans. I realize that it isn't the color nor the thorns prick that are making me dizzy, it is the pull. Of limbo vertigo. If Air France behaves, tonight I will take the plane. And I will cry to leave this part of my family (age doesn't shame me into doing otherwise) just as I will crumble with relief into Remi's arms at the other end.

This is just how it is within an expat's life. It is full and complex and confusing and I chose it. But for me, this aspect of it doesn't ever get any easier. There are parts of my heart in many places and I can feel them beating boom, boom, boom.
Posted by Heather Robinson at Friday, October 03, 2014