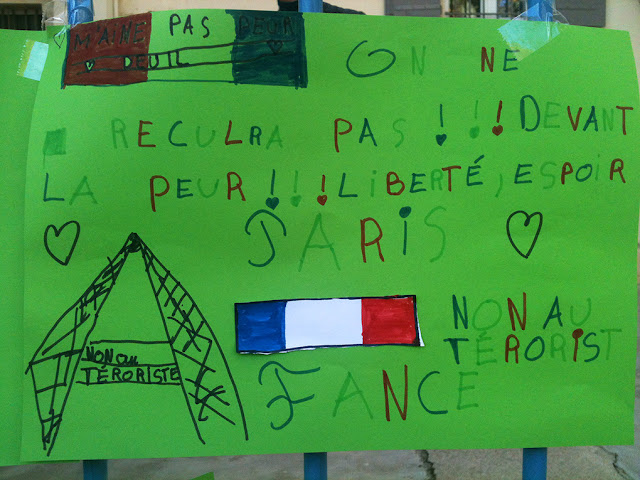 There were nearly two hundred of us waiting outside the gate. Everyone was talking quietly, giving bisous to those they hadn't yet seen since Friday night.

Monsieur le Maire, wearing his tricolor sash, was the first to enter the school courtyard where all of the students were lined up in rows. Some were tittering nervously but all remained still, in place, as members of our tiny village filed in slowly. All extraneous conversation fell away.

I was there with my friends Madame L and her fine companion W. I had written an email the night before asking if I could accompany them. Although I would have gone alone, I have been in a fragile state and thought it best to be surrounded by people who I could rely upon if need be. My friend C, the first "Americaine" of the village, crossed through the crowd. "I want to stand with you guys." It felt really good to see her. She was clearly moved and I felt it echo through me as we hugged.

Shortly before noon, the mayor read a short speech about the importance of our coming together as a community and a nation, that we are here, standing united in the face of such barbaric acts. His hands were shaking slightly. I looked around and saw faces of all ages, from tiny babies to the advanced elderly, all listening, present. He spoke on, honoring lives lost.

Afterwords Madame F, the head of the school, explained what the faculty had done with the students that morning. She told us of the words that were presented and explained, words like Daesh (the acronym used in France for the so-called Islamic State), Syria, Belgium, terrorism, terrorist...and what it is to live in France, what is a democracy, what does the tenet of that mean.

The mayor called for a minute of silence. I had gripped C's hand at some point. I bowed my head and prayed...I tried to find the words...I have had such a hard time finding the words or even speaking at times over the past few days. When I failed I directed my heart towards the victims, their families, their friends and loved ones...and all who were touched directly and indirectly by this massacre. Which means, finally, all of us.

The minute over, the bell of the town hall began to toll and one of the students ran to ring the school bell. We were thanked for coming and the group was beginning to disperse when someone started to sing "La Marseillaise." Voices joined in, one after the other, singing quietly but with determination. I did too, while crying, when I could. As Remi wrote this weekend, we are all French right now.

When it was over, glances and nods were exchanged, a recognition. I fumbled for kleenex then my sunglasses and quickly put them on for this was not about me. This was and is about that feeling of solidarity, even amidst an extreme crisis, that I felt in the courtyard.

I asked Madame F for permission to take a few photos of the drawings that the students had made in order to share them with you. C, who works at the school, had told me that some of the young ones had experienced difficulty in putting their feelings into images. But in words they wrote, "No to violence and yes to love"... "Not afraid"... "Grief"... "No to terrorists".... and... "We will not pull back in the face of fear. Liberty, Hope, Paris."

A beautiful young girl approached me just after I had photographed that last phrase. "Did you take one of that one? I did that!" Nine years old, ponytail swinging, eyes shining. I averted my gaze as I didn't want to confuse her with my clinging tears. "Bravo, tu as bien fait," I responded. You did good. 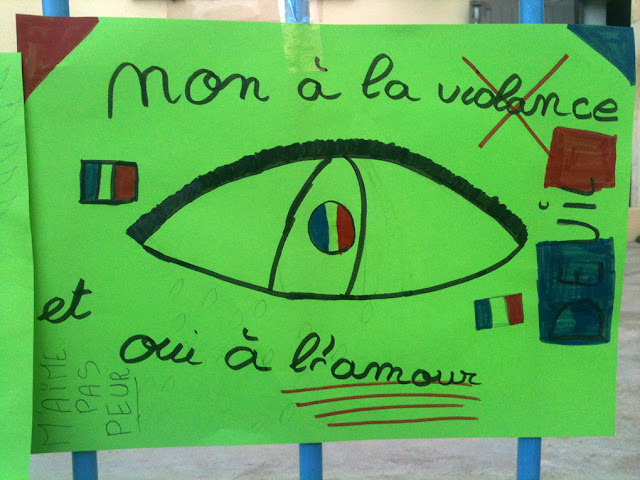 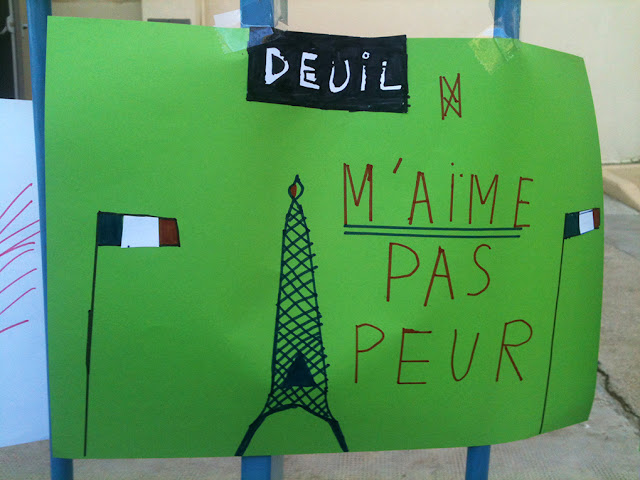 I don't know where the events of November 13th are leading us or how any of it can be resolved any time soon. I fear we are headed into a war, I fear we will be torn apart. I fear, I fear but also, I love. And I am very grateful to have been present at a moment of resilience in the midst of such chaos. 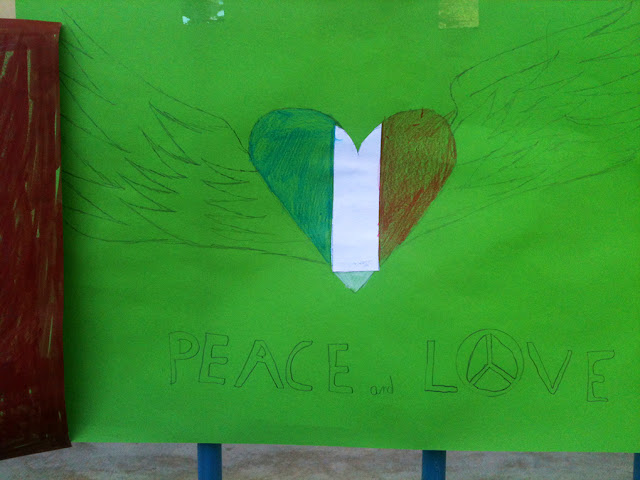 May we find a way towards Peace and may our hearts remain strong.

Sending much Love to you all from France,
With my deepest condolences to all who have lost or been hurt by this tragedy,
Thank you to all who have sent emails and comments of concern,
H.