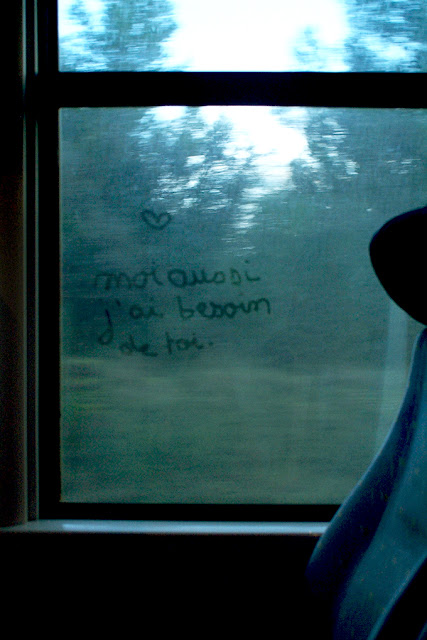 We were laughing, my friend Madame L and I, as the train pulled into the station. The sun had come out as a great gift after we had passed a wonderful afternoon together in Nimes. She had invited me to lunch as a post-Christmas present and we were full and content. Once boarded, I played with a tiny toy dog held in the lap of an impeccably dressed tourist who chatted in Chinese with his partner. The light dashed in and out of the car and so it took a bit of time for me to notice the note finger-drawn on the window across the aisle, "Moi aussi j'ai besoin de toi." A little heart punctuated the sentiment as the scenery whisked by.

Remi picked us up and I was surprised to see that he was driving the BMW instead of our old Saab. "I thought it would be more comfortable for L," he explained. We dropped her off in our tiny village and then headed into Avignon where Remi picked up his repaired computer and wedged it into the back seat. It was dark already and the traffic was heavy with those heading home from work. We were keeping to the speed limit of 70 km/h on the main road, talking about something or other when, at about seven yards ahead of us, a car turned and drove into us head-on.

The movies get the details right. Time did that drunken stretch. I said, "Remi" and then either did or did not say out loud but thought, "Oh my God, we are going to have an accident." And this part I know was silent, "...and it is going to hurt." Then I was lifting my head up from the airbag to see the other car spinning until it was ten yards away facing the opposite direction when another fishtailed, barely missing us and sped on. There was smoke and so Remi said first, "Are you ok?" "Yes." "Get out of the car, now!" And I did but I fell as my bag had been between my feet. I picked it up and then sank into the meridian's triangle of grass as to a found island in the Pacific. I was unhurt.

Now, this is where things get interesting and why I wanted to tell this story (whether or not I will hit 'publish' is another matter). I looked up to see the other driver, a very young girl, trying to limp in my direction. Her face was a blur of blind fear. And then, Remi was at her side and another man too, we'll call him the military man, for that is who he is. He had been right behind us and used his training to act, immediately. He stopped the traffic and came to the girls aid, helping her down on to the grass and keeping her conscious by asking her questions about her hurts. Out of nowhere appeared a woman who looked so familiar to me, dressed all in black. She immediately knelt down to listen to the military man's instructions and propped the girl upon her bent knees. She consolled her endlessly. And at some point she turned around and saw me. "Were you in the accident too?" I answered thickly, struggling as my French floated to the surface. She gave me one hand to hold while she used the other to comfort the girl, who it turns out had only had her license for a few months,  her first car for three. "I'm so sorry, I'm so sorry," she told us, "I didn't see you. I didn't see you at all."

Out of the shadows, so many people arrived, "Have you called an ambulance? Is there anything that we can do?" Assured, they would receed. Within minutes, I could hear the sirens wail. I wanted to tell the girl that they were coming but I didn't know her name and was still deep in shock. But I watched as the firemen arrived, a truck and their ambulance, as it works in France. They immediately sped into action to help secure the site, spot lights blazing, but already the military man and Remi had moved the girls car off of the road. The police arrived minutes later, then the municipal police and started their investigation. The military man's wife fetched a beautiful wool throw from their car to wrap around the girl as she was lifted onto a guerney.  She was taken to the hospital and I am happy to report is now at home, with no broken bones but just bruises as her face had smashed into the windshield, this despite that she had a seatbelt on and the airbag released. The impact was that hard.

The clean up crew arrived at the same time as the depanneurs, the tow trucks. Already, the woman in black had started to leave noiselessly but I called to her. Earlier I had asked her, "Are you an angel?" Her response was a slow head shake no. She came back and we held each others hands and locked eyes, "Merci...merci beaucoup." She understood that I meant more than I could say. I would repeat the phrase to the military man and his wife. They had all stayed so long, so selflessly. The firemen and the police were so efficient and present. I also thanked the head fireman, who is a professional, somewhat of a rarity as so many are volunteers in France and told him how impressed I was by how cleanly this had all rolled out and how much willing help I had witnessed. As one final proof, the tow truck driver offered to take Remi and I to a nearby fast-food joint so that we could wait in the warmth for our taxi to take us home. One more thank you to him for doing what hadn't needed to be done.

The next morning, I woke up feeling groggy and with a pain in my shoulders and chest from the airbag. But I looked in the mirror and thought, "I am fine." I couldn't believe it. So much chance (and Remi's quick reaction in turning the car at the last minute) had helped us and the girl. If we had been in the Saab, as we should have originally, then we wouldn't have had airbags and where would we be then? And if I was fine, what did that mean?

Then I remembered that little not so secret love note left on the train window. "Me too, I need you," is how how it translates. Or "I need you too." And I do. All of the kindness that we were shown helped us through something truly frightening. How those words had either shown dark or glowed bright depending on the background of the scenery that whisked by, how delighted L and I were by the simple beauty of them. We are all in this together, we all need each other. That matters, it makes a difference. And we do too. 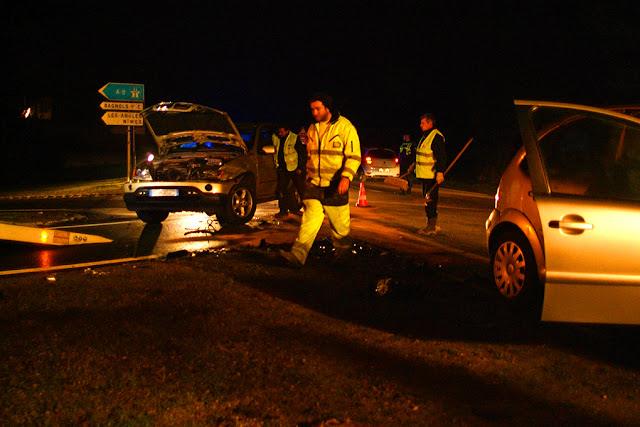 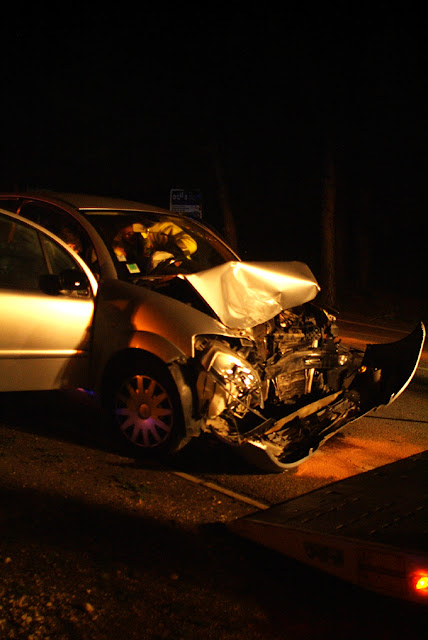 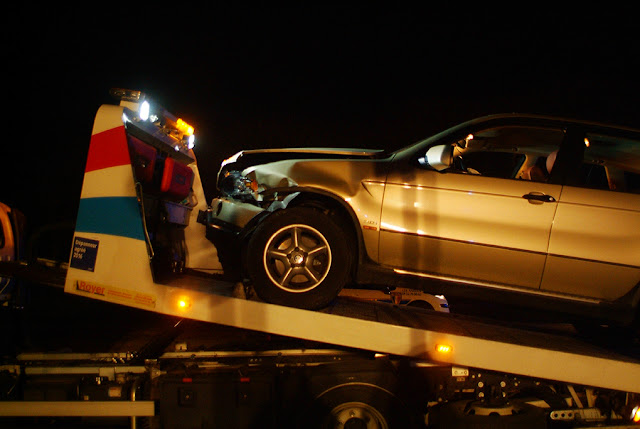 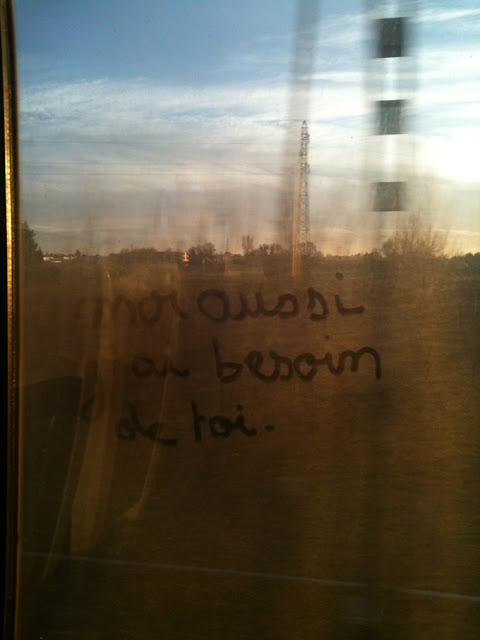