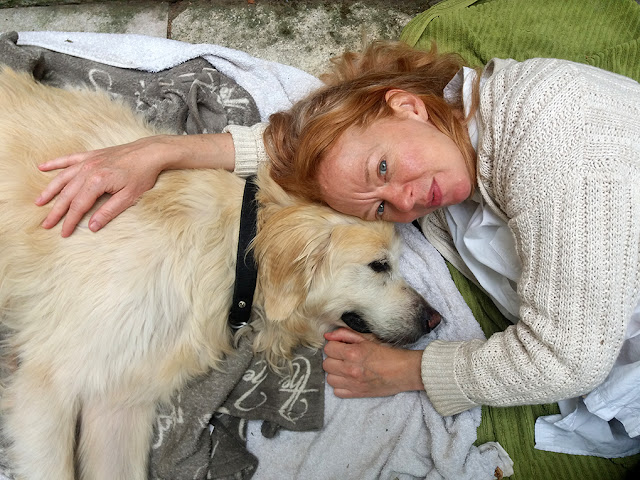 My beautiful boy Ben left us yesterday. And I can assure you right away that he passed in true peace.

I saw his decline as soon as I returned to France but it has only been within the past few months that his advanced kidney disease began to have an effect on his daily life. He lost an enormous amount of weight and he lost his bark. He increasingly had difficulties with his hindquarters and needed help on the stairs. But he was in very good hands. Claire has been Ben's vet since he was a tiny pup. She is also one of my dearest friends here in France. She and her partner Franck, who is also an excellent vet, took wonderful care of him. And because of that, he was functioning very well until the end.

I was fortunate enough to be able to spend a lot of time with Ben recently. He was, as always, so full of joy. It was the defining characteristic of his existence and he never discriminated in whom he would shine that light upon. He handled his age with grace and an always perfectly on pitch sense of humor. All of the neighbors knew of his decline and would run inside to get cookies to offer him when they happened upon him during our walks down the street. Ben begged for those petits gâteaux without mercy and everyone would laugh. It was contagious. He was a charmer through and through. And nothing pleased him more than he when he could make someone else happy. It gave him great pride.

However, the day before yesterday, he could not get up. It came out of nowhere and as he snapped as if to bite me when I tried to help him, it became immediately obvious that he was now in great pain. I will not go into all of the details but by the end of the day he had let us all know that he was ready to go. I had been watching for this sign for quite some time and it was very clear. Along with my ex-companion, we made the decision and called Claire.

That evening will remain very dear to me. I made myself comfortable by his side and talked to him for hours. I told him how much I loved him, how much good he had done in the world, that he had taught me about love and the beauty of life, how he had helped so many people. We watched it get dark, the arrival of the first stars and then the brightening of the sky as the moon rose, magnificent.

The next morning he could not lift his head but his eyes were clear. I repeated all that I had said the night before and also spoke of so many wonderful stories from the past. We had been through so much together. I never stopped petting him while I spoke.

After Claire arrived, we settled into place for the final part of his journey. It was time to free him from the pain that he in no way deserved. My ex was behind him with his head on Ben's neck, while I was in front looking into his eyes. Claire gave him an initial sedative to send him off to sleep. While we spoke to him, Ben would not stop licking our hands, just as he had the entire morning long. 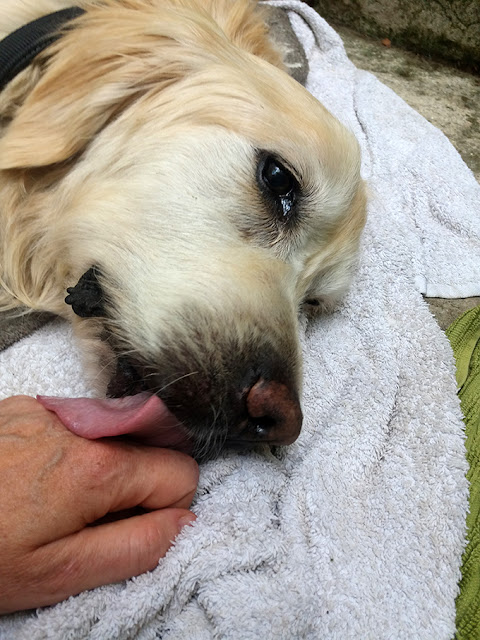 Claire could see that he was resisting the sedative. He wanted to make sure that we were ok. She administered the second shot that would eventually still his heart. We kept talking to him and I could not stop repeating, "I love you, Ben." Claire placed her hands on him and we were all so peaceful that Kipling fell asleep nearby. Eventually, Ben did too. And then his heart stopped. For a minute or two, I could feel his spirit hovering. And then he was gone.

I am so grateful for so many things.

That his favorite three people in the world were at his side. That he only had two truly difficult days. That we gave him such a wonderful life. That Ben was Ben.

I miss him very much. And I will continue to do so, I know. My tears come in waves.

But today I am trying to focus on the love in my heart for him. For that will always be there and in that way he will live on. Love was his life goal. Let his example inspire me so that it shall also be mine. May I honor him in doing what he did so well.

I know that he is with the angels now because he was one while here on earth.

I love you, Ben. Thank you for all that you have given me and for having been such a true friend. 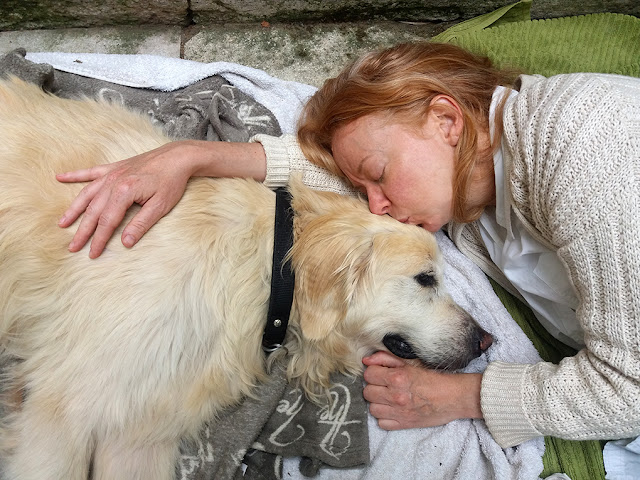 ****
I know that so many of you here loved him too, even without knowing him. It is why I wanted to share these photos, taken in the last hours of his life, along with the story of his passing. As he has long been such an important part of my existence, as well as here at Lost in Arles, I hope to do a second post with some of my favorite moments with him on the blog. Ben would not want any of us to suffer, ever. So while I realize that you might share in my grief, there is still so much to celebrate in his life well lived.

With much Love from Provence,
Heather