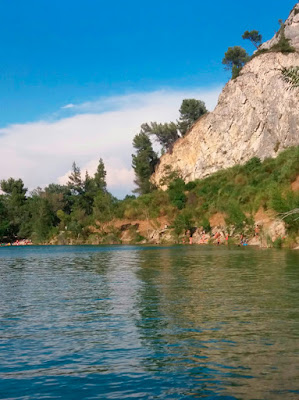 I was the one who suggested that we go swimming. Because it was just too hot. Even for Provence.

Hastily, I had balled up a swimsuit to throw into my overnight bag, just in case, some sort of instinct pushing hope to the forefront. Wouldn't it be lovely if. And yet once my proposal had been accepted and readily by the man that I am seeing with a casual "allez" (in that long drawl he has sometimes), I realized that it was time to actually put on that suit and assume it. It had been a year since I had tried. A year ago, when one of my ange-gardiens (you know who you are) would assure me out of my near homelessness as if it were nothing on her beautiful estate.

Hard times do not always make one lean. Despite my still healthy eating, I have put on weight. Or back on to be more precise. Is this normal for the course at a hiccup away from 49? Is it hormones (I just had a blood test done so will at least have a response for this possibility)? Such a hard subject for me, where my desirabilaty (or lack of) was...the reason cited for a very important turning point in my life.

In the heat of his bedroom, I stretched and pulled the nylon of my suit, suddenly also aware that my legs weren't shaved. My belly balloned so that my breasts were less covered. All of me wanted to shut down, to cancel, but he called me, "On y va, my sweet?" and so with a gasp or a sigh, I am not sure which, I quickly buttoned a white shirt and shorts, shuffled on the espadrilles and bundled into his camionette.

He is a good driver and I need that reassurance after the accident that was the beginning of the end of my last relationship; one that has left me jitterish as a passenger. But with the windows down, and some sort of beautiful music playing, usually un air africain, I feel safe. As we went, I forgot my hesitations, only reminded by the trickle of sweat running down my spine trapped by nylon. And then, carving through the base of the rockiest part of the Alpilles, we arrived.

I won't tell you the address. In true provençal style, it is not indicated on the road, this lake, fresh with water from the spring, and yet there it is. Don't idealize it please, for even in its small form, it is already annecdoted with a "snacking", a tiny fake beach and even a Zepyr line for waterskiers. He sensed that me, so private, tensed.

"On peut aller plus loin, d'accords? Trouver un petit coins tranquille. Ça te va?" Yes please for a place beyond. In my fatigue these days from my work I am not always as tolernant of crowds and crave peace even in public.

We found it. It really was not obvious. A barely there trail leading down to the water at the farthest reach of the lake as the rest of the alcoves had already been taken under such a fiery hour. But somehow, he spied that tiny scrap of land that was shaded (needed for me). The ground is shale and under my espadrilles the rocks slid too easily. I held on to the tiniest branches to guide my way; they snapped under my clutch. He hacked away others to make room, always a gentleman.

Where we perched, I cracked open a beer so cold, me who never drinks it save for under such circumstances when only that particular bubbly will do. Holding onto the tree umbrella-ing above our heads, I tipped my toes into the water.

Warm. And so off with the clothes, although not the self-awareness.

The rocks on the edge, leading in, were slightly painful to touch with my now city feet. "Dive in! All at once!" he encouraged from the sidelines. I did my version of the Américaine and tip-toed out beyond the depths of my reach.

Until I inhaled deeply, and plunged into the black blue cold.

I am not a good swimmer. Me, a double Leo lion, swims with her head above water. And so I did. Save that finally, I was too tired. So I flipped over on my back. My body, this again belly, buoyed me up. To the last rays of the sun, to the looks that the man that I was with was giving me so gernerously from the shore. I gave in.

For some moments, yawning divine, I felt held by the water. And for the first in many months, I thought of absolutely nothing. He swam out, not to find me but to roam. He went far, into the last rays of the day. But he turned back. And with determined strokes, his head rose and fell across the water until he reached me, found, floating.

Thank you for being here,
Please be really kind to yourself.
With love and gratitude,
Heather 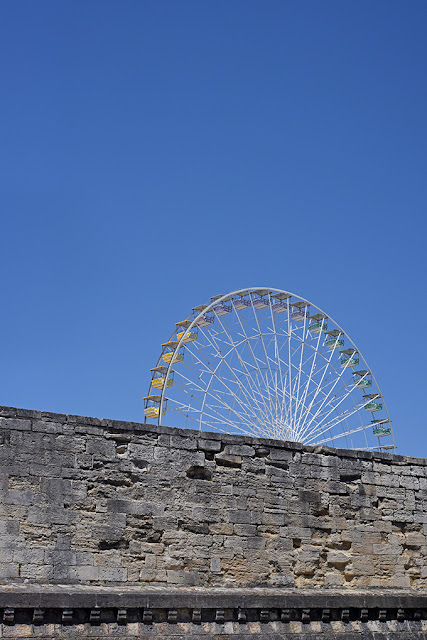 We all feel the need to be attached to something, to keep us from floating, boundless as if on the surface of the moon.

But to what? And to whom?

The man that I am seeing has a daughter who is turning ten. I took them out for lunch yesterday to celebrate and tried to breathe through the periods of silence. I understand when she clings to his arm and looks at me, only slightly defiantly but nonetheless with a claim, "mine." I gave her a bracelet of carnelian stones falling long on her tiny wrist. I wonder if she will wear it or if it will be discarded, forgotten. What could it - or I - possibly mean to her? Having no experience with children, absolutely none, ever, I am nervous on these occasions. I simply try to breathe and be present, knowing at the very least to talk to her on the level she wishes, which is quite a serious one. Only rarely do I receive her smile.

Will this coupling last long enough that I will gain her trust? I am still working on gaining my own, also with a claim, "mine." For me. I find the terrain underneath my feet wet, then dry and smoothe, then burning deep under this particular heat.

At ten, who did I belong to? The wind, the trees, certainly, but also to the letters that were my pearls linked in a row as books opened worlds that I could not have possibly dreamt. We had moved to a very big Victorian house but rather than roam its rooms, 23 in number, I would hide in my oak-lined closet to read for hours on end. There, I felt centered and knew I was where I belonged. Hidden amidst the lives of others, I learned.

Again in these past days, I am finding refuge in novels as if looking for clues. How to be, what to believe in, both in the grand scheme and the minutiae. I don't think that I quite realized how very long it would take to build something anew that I could attach myself to. And there is still, two years in, no solid structure in my life that reassures. That is a very long time to hold one's breath and hope for the best. For now, the only link I really trust enough to put my weight into is the oldest one within me, love.

Mais malgré tout, j'ai toujours des questions. I think it is normal, considering the present logistics and the recent past. Who truly loves me? Who do I truly love? What makes me sing? Where do I go to live my dreams? This is my daily life. Every single morning I awake with questions in my head, thoughts racing, sometimes regrets, usually fatigue but also with quieter songs of comfort and pride.

Oh, how I do feel that I am holding on to the balloon of "me" to be tethered to the ground. This girl, this redhead girl with blue eyes, still, in essence, at ten. Attached is where my heart goes. To remind me, beating, that I am not only this eternal loop of asking. These letters, forming words are the ribbon. How I wonder at the possibility to just...let them go, to let it all fly...free. 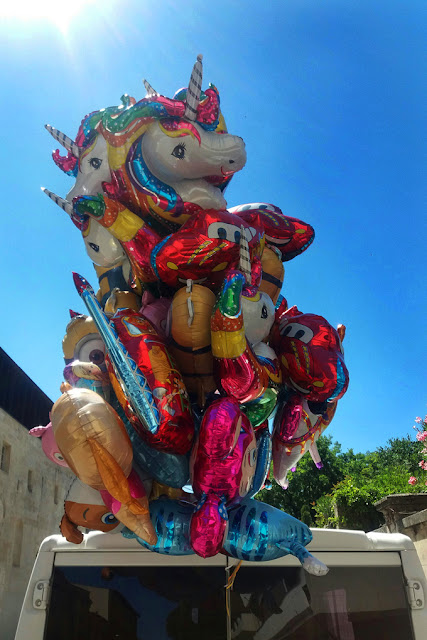