Twenty past midnight and 45 minutes late 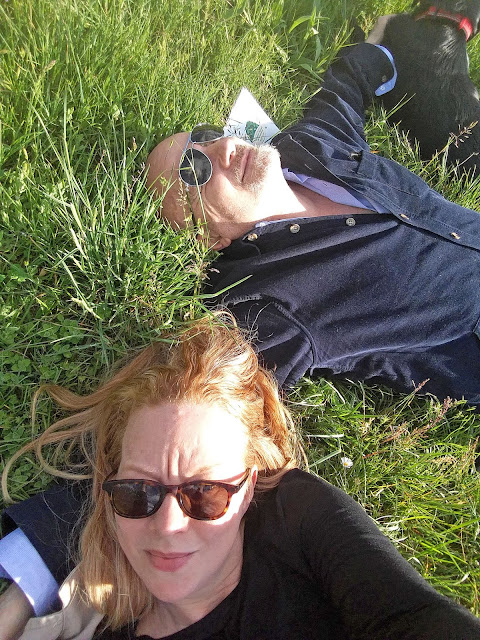 I didn't want to see it. That things between us were slipping down; that we were beginning to argue more frequently, although neither of us are fighters.

When it was simple, it was blissful. But when it wasn't, it was something like ugly, the French use the word "glauque." And little by little, the worst of those moments somehow seemed to loom large, like a big balloon figure in a parade, over the million moments of quiet happiness. Contentment came into question.

He had said some rather fantastical things in the beginning, ones to turn a girls head. I remember a so casually stated, "I would be happy to spend the rest of my days with you," that it was almost like he was he sipping his words inward with his breath, just as he was trying to dare them out.

I didn't, couldn't, make a big top tent of a thing about it then. Now, I wish I would have more...to have tested what he had said with a prodding fork of contentious vulnerability to see if it was true. Or to see if it had been..only true in that particular moment. For I know that happens sometimes. How human we are, stumbling through. We blurt out. Some of what he said was not always so solid as to induce certainty. I have done the same.

Despite the brevity of our relationship, at eight months, not even the longevity of a birth, I was given some of the sweetest experiences with a man that I have ever encountered, and could not even have imagined possible.

When he swept me off to Rome...I do know that those were some of the happiest days of my life. Just filled with so many "oh's"...of turning a corner after midnight and discovering the Pantheon (while he whistled "La Vie en Rose"), or swooning over buttered sage ravioli at his local spot Urbana 47 or singing Adele in our bed despite the fact that I don't sing anymore, but I did for him. He orchestrated and offered it all, selflessly. And oh how we laughed, bells ringing, throughout.

Every day, every day, we laughed.

But what do you do when you are both a bit damaged by time to the point where establishing a real and mutual trust somehow does not slide into the easy quotidian? When the canyon of your languages and cultures yawns wide, despite the best intentions?

In our case, we truly tried to make it happen. He did so through gestures; frequently buying me simple but pitch-perfect gifts. Dresses that he had picked out on his own, guessing at the size. Tickets to plays and concerts, each delightful. He would arrive in Avignon with his suitcase full of such surprises along with his loving pup, Noumea at his side - an incredible balm after missing my dogs so much. Just as if it was nothing, this giving that I had never known.

I was forceful with my gratitude, I think, even though it was completely genuine. It was so new to me, such effusive generosity, that I wanted to be sure that it was practically burned into him. At times my "thank you's" or "I'm sorry's" when something didn't quite come up to snuff, annoyed him. I understand why. And yet I am calm in the warmth of the love that I offered, as well. Arms wrapped around. Love in a steadfast gaze, the corner of my lips upturned, yet biting down my delight.

Recently, I had began to ask the "Where are we going questions?" to see if we were capable of making something lasting. This despite a clear stance that I was no longer willing to abandon all to move to Paris unless it was for a strong plan. I had already done that once and so am weary. And also, yes, I am dearly attached to this Provence. How I have fought to stay here. He seemed to understand and had never made much of a fuss about the commute although his responses were vague, I see that now.

Verbally, he expressed himself less and less expansively - it would throw me every time that he would end our phone conversations with a laconic "Ciao" as if he were speaking to a colleague and not his girl. And yet, declarations of love were made. Late in; seven months in. That is how long it took him for a clear, unapologetic, "Je t'aime."

And throughout this time, nothing truly terrible happened, despite some rather dramatic disputes with hurt inflicted on both sides. There was no cheating on the other, no viciousness. We did our best to see each other every week and Christophe was great about largely paying for my train tickets as I could not. We enjoyed each other, from table to bed and the beeping camionette that he rented so that I could show him pieces of my Provence, including, finally, Arles.

So how do you explain it?

I dig for sustainable answers.

We drank quite a bit when we were together. There was something of the "Oh, hooray!" of celebration in the beginning when we were reunited, that fierce recognition, and then trying, or subtly forcing, to prolong that feeling later with occasionally problematic results. Prosecco as lighter fluid.

At one particular twenty past midnight, the Cinderella of our story vanished without a pumpkin coach. Stripped to the who of we are with nary a glass slipper in the alley left to make a fairytale.

But this is not everything.

There are so many deeply profound misunderstandings in our loves. It is not only roses that bloom. And for it all, well, finally...we can only do our best to hold them with forgiveness. There is no rancour. Only those haunting tsk-tsk whispers of regret. He still is the same exceptional man, this Christophe, who I kissed in return, deeply, on our first date at Le Train Bleu I found him to be so funny, intelligent, creative, handsome, interesting to the point of being a bit mysterious. All of this, even though he had been 45 minutes late.

Maybe we were 45 minutes late. Perpetually.

I will just leave you with something that my Mom said a while back (who, along with my Sister met him this past Spring and instantly appreciated him): "Heather, he can be the most wonderful man in the world...but that doesn't mean that he is the right man for you."

How I have cried. I can't think that he imagines how much. Or that he would occupy himself to do so. Maybe he has cried too, although I have a hard time imagining it, as well. Perhaps he is relieved? Just that...the not really knowing is proof of our not having stayed aligned. We were often unreadable to each other beyond the no uncertain terms of happiness. And certainly of that fuzzy word "fun," incorporated.

The older that I get, the more that I understand how incredibly important it is to have just that, empathy in all situations, communication. To imagine Cinderella (or any other icon you choose that applies) outside, alone, at twenty past midnight, stripped again of her parure, but also of her bright, bright hopes...deciding where from here she can possibly go again.

I will offer myself a hand up from the pavement, this sadness, and one to Christophe too, in Paris. If he needs it.

We lived a tiny lifetime together. Even if we were not on time for each other, it is still not too late to be on time for ourselves.

With all gratitude,
Heather