"O Christmas tree, O Christmas tree..." well, I don't know the rest of the words to the song but it didn't stop me from humming the tune the entire way back to the house from the market yesterday as I carried one in my arms--not at easy feat as it is far taller than I am. I had bought it, as I always do, from the gentle giant that drives down from the mountains in the Ardeche region each year with a truck full of freshly chopped trees. He has pointy teeth and stutters if I look him directly in the eye but seems genuinely delighted each time someone chooses his wares over those of the other sellers. I joked with him that I feared that Remi would be furious with me--I always get ambitious and chose the biggest tree possible and this year was no exception. I figured that who knows where we will be next year or if we will have such high ceilings, so why not? 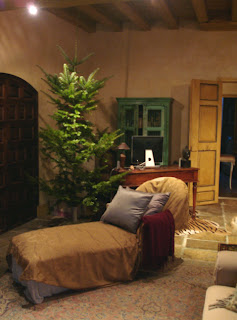 Remi had the rather brilliant idea of securing the trunk in the base for the outdoor umbrella. But it just wasn't the evening to do more. I was up on the ladder, ready to go when Luciano Pavarotti singing "Ave Maria" on the stereo took me by surprise. My Dad was a huge "Luch" fan (as he called him) and would drive us all crazy by turning the song up to full volume as we were trimming the tree. "Listen to this! Listen to this!" he would say with delight, even though we had all heard it so many times during so many holiday seasons. My Dad didn't even enjoy decorating and would usually disappear after ten minutes only to later pout that we had done it all without him. So I don't know why I started to cry so hard but I did. It isn't the first Christmas since loosing my Dad but it was just one of those moments when it still seems so recent.

So tonight will be take two. Time to light all of the candles and continue the tradition with joy and gratitude in my heart because that is what the spirit of the holiday season is all about. 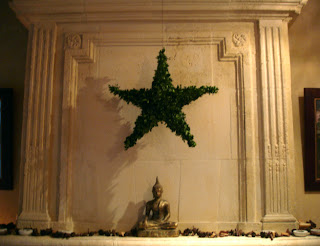