Truffle lunch in the Vaucluse 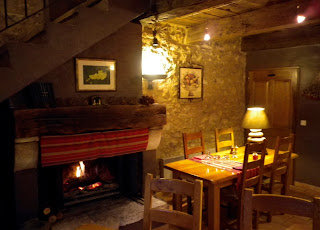 Up, up the twisting road, through a silvery fog spread across a leafless forest like cobwebs. The peak of Mont Ventoux, "the Giant of Provence" and perennial back-breaker in the Tour de France, is cloaked from view as are the closed for winter hillside towns of Peter Mayle's Luberon far below. Where are we going? It is a surprise, an invitation from our friend Jean-Pierre and his wife Anne. Their nervous but loveable Jack Russell terrier, Marius, lies curled up between them asleep. Ben, our Golden, stares stoically out the back of the now repaired Range Rover. As we finally pull into the sleepy village of Saint Christol, our curiosity is peaked for there is nothing but a few houses huddled together under the eaves of a modest twelfth century church. Remi spies a tiny sign for L'Auberge de Loubion and we pull into a back lot that is shadowed by broken windows and the streak of a passing cat. Did we really drive nearly two hours for this? But Jean-Pierre is a man of the world and so we put the dogs on their leashes and followed him trepidatiously to a low-lying stone building. 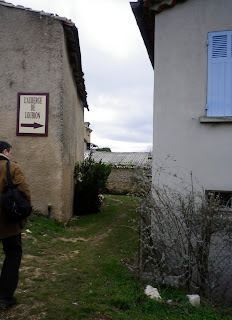 Ah, the rush of warmth as we enter and are seated in the small but exceedingly cozy dining room. The dogs settle in as we are sized up by the diners at the two other tables. There is a mysterious scent in the air that mixes delightfully with wisps of smoke sneaking out of the crackling fireplace. Agnes, who owns the auberge along with her husband Eric, the chef, has a quick explanation and one to make us all gasp a  little: truffles! Here we are in prime truffle country and so it is with glee that we dive into a menu gastronomique, each course of which features the fragrant fungi. 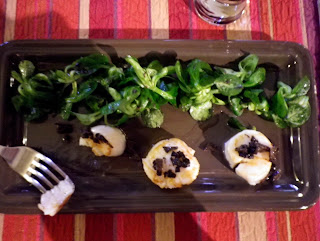 Truffles, a mystery still and as always what is rare is expensive. Cicero thought that they were 'children of the earth'. A Macau casino owner spent $330K for a pair of white Alba truffles last November. We will be tasting the black Perigord truffle, the winter version, which Anne explains that some true truffle lovers appreciate over the more expensive white Albas. Soon enough, a small glass bowl filled with scrambled eggs arrives, dotted with black bits--the butter and warmth of earth. Three perfectly pan-roasted scallops topped in a truffle tartare follows. The main plate is a perfectly cooked stuffed capon with blanched celery and mashed potatoes all dusted with the tasty stuff. A cheese plate of offerings from the region was brought to the table and left there for us to taste and take as we wanted. A simple chestnut cake topped off a long and lovely lunch. We were, as usual, the last to leave. 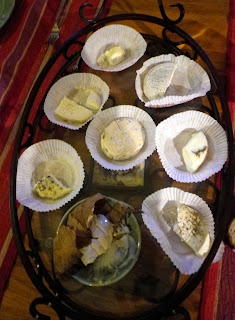 Sadly, a farmer recently shot and killed a truffle thief in Grignan. These wonders are worth much but certainly not the price of a life. As wonderfully rare as the experience was, it was not the extravagance of the truffles but the memory of a well-thought out surprise of a hidden gem amidst the mountains that will remain.
Posted by Heather Robinson at Monday, January 10, 2011