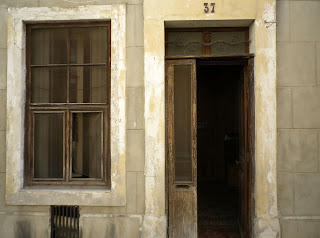 I am learning to let chance hold sway when it comes to encounters in Provence. Just say yes, just go, don't look but see. Quite a drastic shift from the suspicion imbedded in my previous New York bustle and how I have changed because of it, outer armour melting under a tricky sun that draws my eyes up and out.
Remi and I were both squinting under the noonday glare as we walked up to the tiny house for sale a stone's throw from the Roman Arena. It was one I had walked past many times with our Golden, Ben but had never noticed, as if it had pulled back into itself, an introvert. That was definitely not the case of the balding, elderly man who stepped out of the shadows of the open front door to greet us. He was as far from the showy Mediterranean macho mold that I could imagine and yet exuded a quiet confidence as he spoke--looking me directly in the eye, a rarity here--that won us over immediately. He spread his hands wide as he told us up front that the house had been empty for some time, that he had estimated an additional 50K in renovations when he had initially thought of splitting it up into studios. A plan that he had decided against. 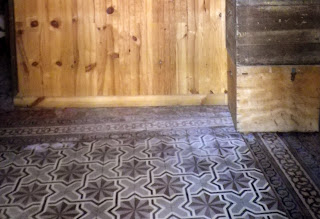 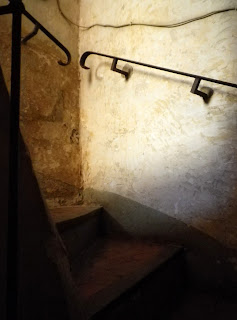 He continued chatting amiably with us as we wondered through the rooms, also being wise enough to let us discern the good and the bad for ourselves. Lovely touches remained, such as the intricate cement tiles that have become so fashionable again and the gracious curves of the iron railing lining the stairs that twist slowly, like a snail coming out of its shell. I love trying to imagine who had decided on covering the main bedroom in a 1960's wallpaper covered with images of jazz men, smoke and the promising words "New Orleans". Such a contrast to the classic terra cotta tiles that were left behind. 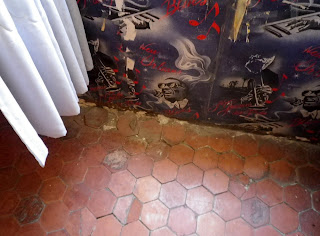 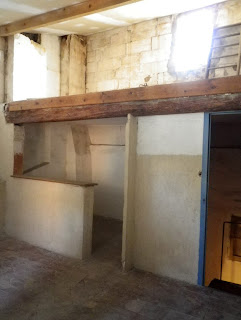 If the owner of the house was most attached to the cave, or cellar, where he played as a child amidst the coal chute (and which was lined by an unusual stone trough that very well might be Roman), he seemed most proud of the parfeuille tiles that lined the highest floor. "Three hundred years old," he confirmed with a nod, "I had them exptertised." He seemed pleased by our appreciation of these details, that we were willing to look past the flaking plaster and pine panelling. The conversation rolled around, as they tend to do here, with Remi making a joke about playing the stock market. "I wouldn't know about that, " the owner acknowledged with a wry smile. "You see I've been a beekeeper for the past 35 years." He then launched into a lengthy discussion of the politics of pollution and how it was effecting his Queen Bees. We were fascinated. 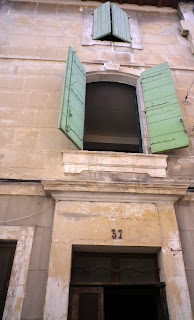 As I made my way back down the stairs, the image of this man clicked into place. I could see his large hands moving slowly towards his hives, his gentleness a necessary trait of his profession. To earn the trust of the bees. I stepped outside to take a last photo of the facade, to get a better idea of the neighbors and view. I could hear the men's voices lower as they reached the doorway. The beekeeper explained to Remi why he was selling the house, why he wasn't going to turn them into studios to rent. That plan had originally been discussed as a means of income for his son. But he had committed suicide at 40. "C'est unparable," he said as he lowered his eyes.
We took our leave and walked home in silence, trying to grasp how something so terrible could have happened to such a kind man. But it was, as he had said, "unanswerable" on many levels. We knew by the time that we reached our front door that the house was too small for us but I think that we both secretly wished that it wasn't so that we could have made some positive gesture in his direction by buying it. As if saving the house and bringing it back to life would have helped. But the right person will come along. When they do, the beekeeper will move to Montpellier to be closer to his other son. He will pack up his hives and go.
Posted by Heather Robinson at Tuesday, April 19, 2011