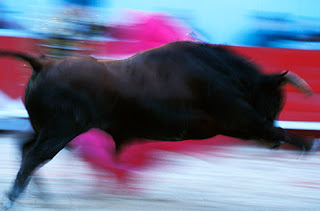 Photo © Remi Benali
Just a quick addendum after yesterday's post concerning the odd melange of the Easter bullfights. During yesterday's corrida, two surprising events occurred. The young Tomasito, who after many years of training was in the ring as his first turn as a torero, was brutally stabbed twice in the thigh by his bull's horns, an injury which will possibly keep him from returning to the ring. Earlier in the day he had told the local paper, La Provence, that "there are so many people who never get the chance to make their dreams happen. The bulls are my reason to live. I think that I am extremely fortunate!" Fate was far kinder to one of the bulls, Pasion, who was spared his life by a public that was won over by his intelligence. The red bull managed to avoid every single thrust of the torero's blade while following his cape with the ease of a swaying cobra. Despite my having mentioned this very possibility in the comments yesterday, this act of pardon is rarissime.
I'll admit to a fair amount of dancing under the stars (and a dusting of rain) last night but not too much either, as I stick to my NYC credo--"always leave the party while it is still good". I can assure you, bouncing around the cobble stones in high heels is not an easy feat. Now, Remi and I are taking Ben and running away to the country, delighted beyond belief that we have been invited to stay with friends for the next two evenings. Time to leave the noise behind and think of what Easter can really symbolize. For no matter what your religious beliefs, from time to time we all can use the opportunity to renew, to start again. 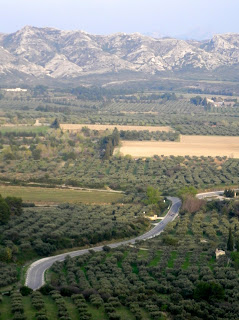