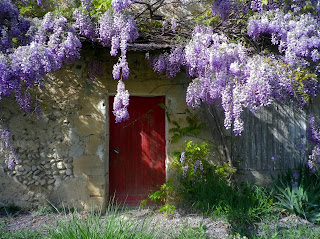 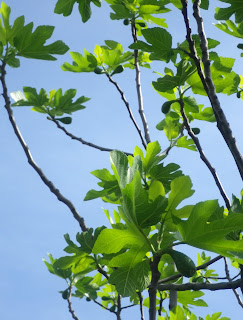 Travelling with a photographer is wonderful as I am often shown things that would have gone by unnoticed and are certainly not in any guide. The other afternoon we were buzzing down a back road when Remi came to a screeching halt and swiftly shifted the Range Rover into reverse, pulling up by an old farm building that was draped in blooming wisteria as a queen is in diamonds and ermine. Bees were swishing about and there were so many little details to dive into. The fig tree pushing out its fruit, powdery irises cooling in the shade, the ladylike Montmirail Mountains holding up the horizon. No sound but the bees and the rustle of oak leaves in the breeze. Moments like this seem too perfect in a way that is almost harder to take in as they are so unexpected. Perhaps that is what I was trying to get to the other day in my post on Vaison La Romaine--I held it against that famous village that it seemed so desperate to be liked when all the elements were already in place. It shouldn't have to work so hard. A little forgetting can be a good thing. 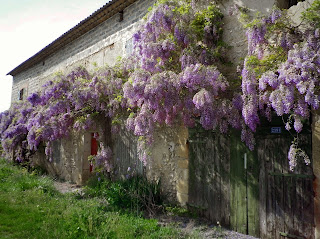 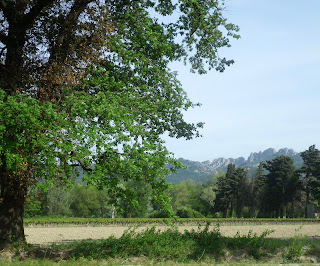 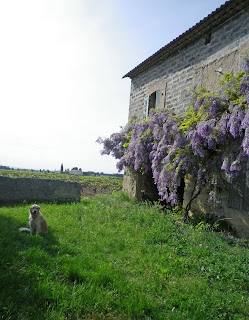 A lot of forgetting on the other hand can be mystifying. Our friend Jean-Pierre took us to visit a mas that had been abandoned for over twenty years. Closed up tight to keep the squatters out. Due to French zoning laws (the basics of which I will spare you) this lovely stone farmhouse will never sell. So it sits. The peace there was something not to be believed. I spoke of it for days. Ben was quite thrilled there as well, he seemed so at home. Remi wants to try and contact the owner to see if he would consider at least renting it to us. A bijou in the middle of the Alpilles, surrounded by the scruffy garrigue that is redolent of flowering thyme and rosemary. How many designers had copied the patina of just such a home? We have been told that such "ruins" dotted the landscape forty years ago and even then, they were expensive. 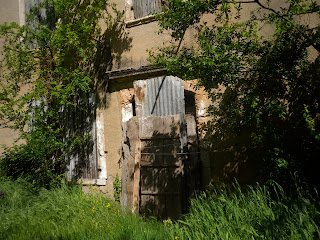 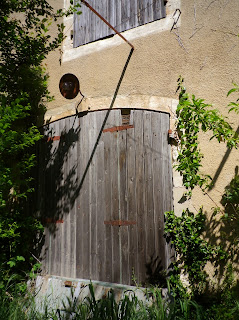 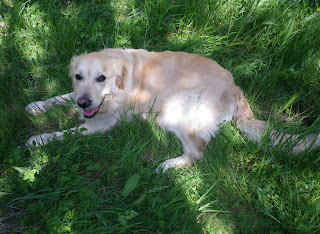 Back in Vaison, in the lower village, Remi photographed the truly elegant Notre-Dame-de-Nazareth, with its multiple facades and unusually delicate carvings. Unfortunately, I was too busy in the act of looking to take many photos of the church itself. I couldn't help poking around the surroundings. This 1930's house was certainly in a far better state than the others we had come across that day but I won't penalize it for that. It too was closed up waiting for its owners to arrive. How inviting to be able to push the gate, open the shutters and let the sun flood in. 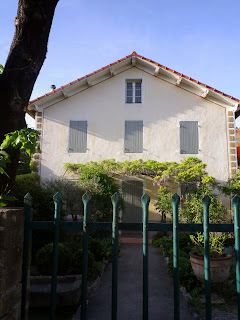 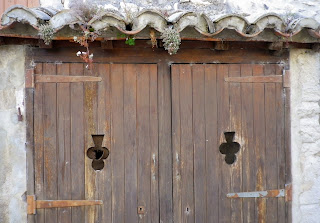 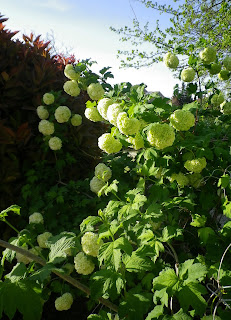 One last thing worth mentioning about the cathedral. Do you know how I am endlessly running on and on and on about the layers of time in Provence, how succeeding civilizations built on top of each other? Now I have proof! Voila! For it was built on Roman ruins, strong columns on which to install a weighty Christian faith. Isn't that something? In Arles, I have always been told that Roman stones were used to build houses but I have never come across such a stunningly clear cut example as this one. 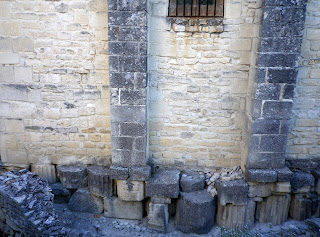 And Ben? Yes, he was happy here too. He is nearly everywhere he goes and is all too willing to share his goodness with all he meets. The joy he brings me each day is beyond words. One special dog. This is actually one of my favorite photos that I have ever taken of him--nestled at my feet, half-asleep with his nose in the wildflowers. Typical of a born and raised Provençal, he truly knows how to get the best out of life. 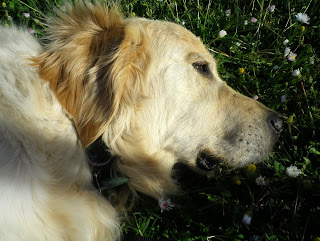