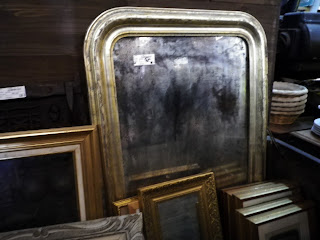 It's that time of year when quite a few of us have antique-hunting on the brain. For Remi and I, it is a regular activity and has been as long as we have been together. When we first met both of us were starting over and so each piece that we acquired had a story, a provenance. At the time, we lived a short walk away from the Porte de Vanves flea market in Paris and would scour the rows of sellers each weekend, occasionally on both days. It was a wonderful introduction to French design for me as every conceivable period was represented. More often than not we couldn't afford to buy, but would go for le plaisir des yeux, a feast for the eyes. After our first visit to Arles, we both started being attracted to things that were very different from our Art Deco style. More Louis XV and much lighter. We realized eventually that we were buying for a new life, one in the South of France. It took us two years to actually make the move but when we did we were already well-equipped, almost as if we had forced this major life change into being. 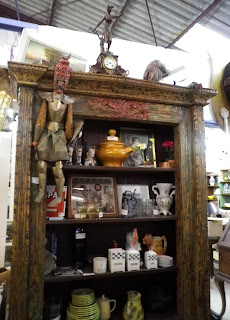 And that process is already happening again with our next move. Yesterday afternoon, I pulled Remi away from his computer and we drove out to Troc-Soury. A little bit of everything is crammed under the tin roof of a hangar that is stiflingly hot in Summer and freezing in Winter and yet I love to go--namely  to be fussed over by Michel and Jean-Philippe. Sure enough, Michel pushed Remi out of the way jokingly when we arrived saying "Excuse me, I need to say hello to a beautiful lady." My hair was pulled back in a bumpy bun, I was floating in enormous wrinkled lined shorts and yet I gratefully offered up my cheek to be kissed. Let's just say that unlike our experience this weekend, the welcome put me in a shopping mood. 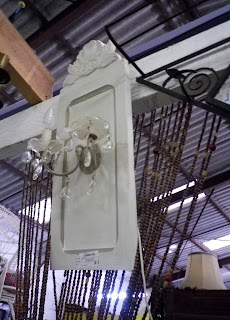 And it didn't take long. Within fifteen minutes, I spied a gorgeous mirror stuffed into a crowded wooden chest. Napoleon III in shape, it has an air of the 1920's with its delicate etchings scratched into a gold frame. The mercury mirror is completely faded and splotched. En bref, patina. I haven't had such a coup de coeur (think love at first sight) for a piece in a long time. And to top it off, it was a true steal. Vendu! 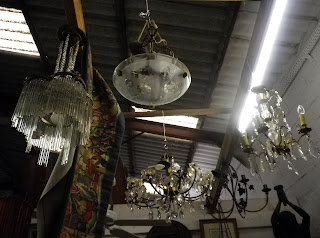 Other pieces tempted me. The wall sconce with its lovely pampilles could be charming if given a Gustavien touch. Maybe with candles in it for a hallway? Not bad for 30€. Sadly, all of the chandeliers need to be rewired but again for 40€, the delicate Marie-Therese could be interesting as a candelabra. For the furniture, I was initially drawn to the massive teak Indian bookcase. Remi nixed it as kitschy. We both felt that the Henri II buffet (only 120€!) would be quite something if well painted, not that we need it. Just fun to imagine. 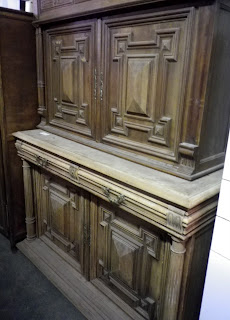 Once home, Remi set to work. Look how the mirror glowed once he stripped away the black layers of dust and grime. 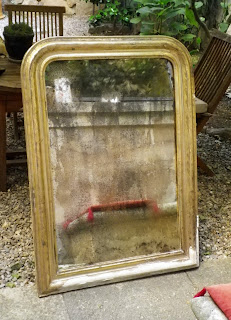 I had a little "aha" as to why I had wanted it so immediately. Its rough around the edges-ness reminds me of one of our very favorite pieces--a fantastic lithograph of Henri IV riding back into Paris that is currently pushed off to the side due to its heft since we are not allowed to put any holes into the walls of this Monument Historique building (and yes, there is a very good story to go with the crocodile skull beside it, in case you were wondering). I have been missing Henri and all of the other unusual characters parading about. Hopefully, they will return to the spotlight soon. As for our first purchase for our next apartment, it is sitting on the bedroom mantle, reflecting the headboard that we made out of old shutters.  The mirror isn't appropriate for the room and suddenly everything else is starting to  look awkward to my eyes. Out of place. A sure sign that I am getting ready to move on if ever there was one. 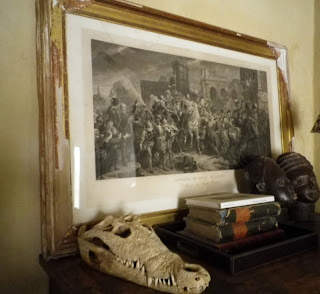 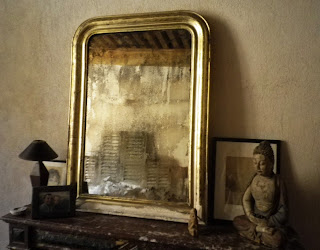