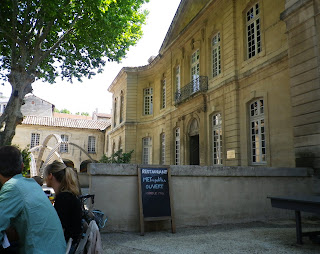 The French are masters of the pause, the little break. Whether it be a middle of the day espresso at a café, or a whole day out of busy week or even a month or two sabbatical in Summer, they have it down pat. I am still learning how to slow down. You wouldn't think it so difficult as the rhythm here in Provence is naturally so very much slower than in other parts of the world, but there is a part of my American culture that yells out nasty things whenever I stop just to enjoy. Luckily my dear friend Frederique is far more adept and came up with the idea of an afternoon in Avignon. I agreed on condition that I was able to take her out for a belated birthday lunch--not exactly a demand requiring much negotiations. I made sure to chose wisely, a no-brainer address although a fairly secret one. In the courtyard of the Hôtel de Caumont,  which houses the Collection Lambert, lies the METropolitan restaurant, one of the best in terms of rapport qualité prix (bang for the buck) that I know of. I reserved early (+33 (0)4 86 81 47 49) as there are only about twenty or so tables and each is snapped up by quickly by a largely local group with a few lucky tourists mixed in. The servers are handsome and funny, the ambiance delightful. 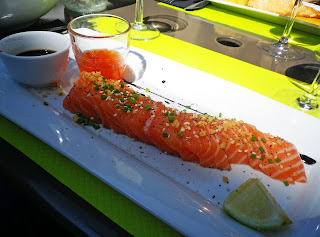 We settled in with a sigh of relief (parking is a notorious pain in Avignon) at the little table with my name on it (literally). Soon enough we were "chin"ing over a luscious glass of white and relaxing under the welcome shade of the plane tree. The menu is small and nearly everyone chooses the formule for 16€ which offers a choice of plats and a dessert. As I am always in a perpetual state of sushi withdrawal, I decided on the salmon carpaccio topped with chives, peanuts and spices as well as a balsamic reduction, soy sauce and an aigre-douce sauce for dipping. This was accompanied by an excellent salad that I am going to try and replicate this afternoon: cabbage, sweet peas, tomatoes, parmesan and apples in a soy vinaigrette. Fred went for a more traditional route but her salmon was perfectly cooked and paired well with the butternut squash purée and the ginger cream sauce. For dessert, I was delighted to be offered fresh chevre (goat cheese) and surprised when I was brought a whole one all for myself, with an extra basket of bread. Vive la France! 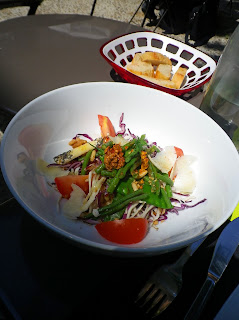 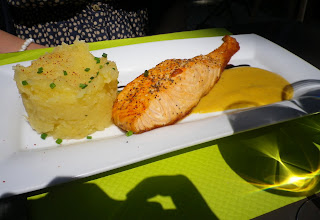 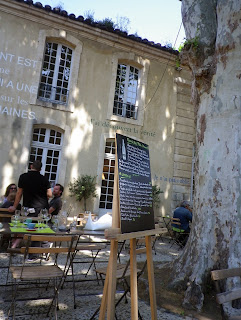 Now, the Collection Lambert might ring a bell. This is the site of the attack that I wrote about not too long ago. Fred (as I call her) and I had planned this day beforehand and weren't going to be thrown off by death threats. If anything, I felt that it was very important to go and support an artistic institution that had been so put under fire (the museum's owner had also received 30,000 hate emails). The show, Je crois aux miracles, or "I believe in miracles", was outstanding. Very challenging and I was grateful to have seen it with Fred who has a wider knowledge of contemporary art than I do. Barbara Kruger's Talk to Me is especially stunning as you enter. But we were both the most moved by seeing Piss Christ, the piece by Andreas Serrano that had been damaged. I was so grateful that the museum decided to keep the work up in its current state because the violence, the hatred involved to smash it so (strangely the face of Christ was the hardest hit) was more frightening than the work itself could ever be. It left me feeling sick and panicky. Fred agreed. There were two young men stationed beside the piece and nearly everyone wanted to ask them questions about...why? 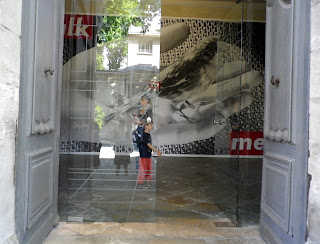 Afterwards, we both felt a need to digest what we had seen and shake it off. It was that powerful. So, yes, a little shopping was in order. And once we had both found a little something, it was late enough for a perrier menthe at one of the many ubiquitous cafés that line the Place de Horloge. We came back to Arles sleepy but elated at the same time. Spirits and bellies well fed. 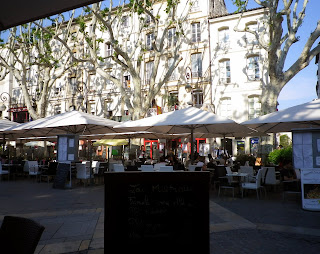 The Saturday market in Arles is one of the largest in Provence and though it can be madness, it is worth braving the crowds to find a treasure. Fred and our beautiful friend Mathilde (who exudes so much je ne sais quoi that men turn to stare when she passes) were perhaps a little over ambitious in buying two climbing tomato plants each. But why not? They were only 10 euros for all four. 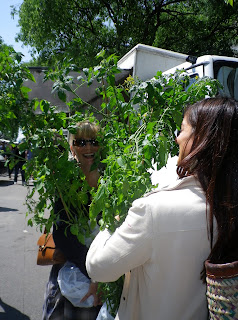 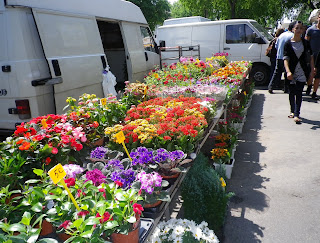 One of the best examples of the pause that I know of is the after the market stop. Everyone contributes a little something to nibble on--in this case if was a delicate tomme cheese with super sweet strawberries. The café owners do such a brisk business they don't seem to mind the pique-nique. As it was just us girls, we sat and gossiped until 1:30pm. A fantastic way to get a weekend off to a great start. 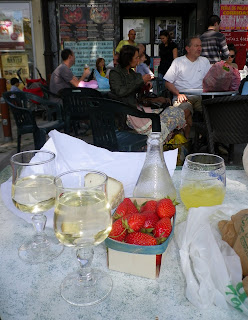 My haul from that market day? The first batch of pivoines--peonies! It seems far, far too early but my favorite flower seller assured me that no, they are ready and they are from the region, not to worry. So far they are holding up well as is the rose that he placed silently in with my bouquet. 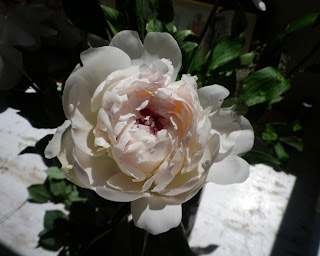 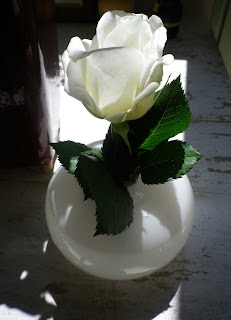 The Wednesday market, as I have mentioned before, is much more about everyday shopping. No one dresses up to go, as they do on the weekend. Now, as much as I truly try to avoid posting about the market as it is more than a tad cliché, today I can't resist. It was just so bountiful. Spring really is the finest season for the farmers here. Although asparagus and strawberries are the big stars of the moment, I was most interested by the fresh garlic--especially as the owner of the stand told me that I had to use the stalks as well, perfect in an omelette or pasta. I will! A small gesture that I found touching? When I bought the world's best goat cheese from my habitual stand, the young woman carefully selected a bit of flowering thyme to press into its heart before wrapping it up like a gift. How wonderful to take a moment to do something well, with kindness--the best kind of pause there is! 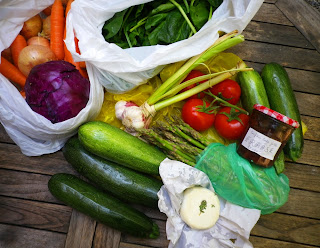 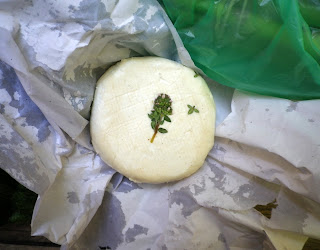