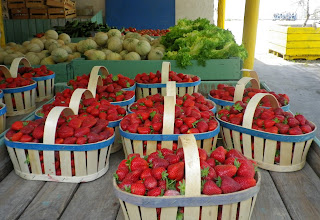 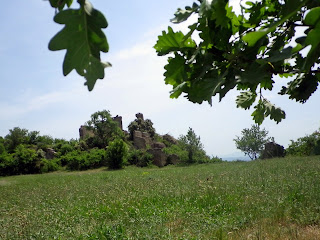 Seven adults, two kids and two dogs crammed in two cars, heading to a secret location. Actually, not so for us, as we had chosen it, but for our band of friends from Arles and Nimes. It is rare that we can get everyone together and so such events are usually planned to down to the minute. "Give us a clue," an indice, they would shout out every five minutes. The suspense was killing them. And those were the adults. But we remained implacable until arching over the last hill, arriving in the village of Vernègues after a brief but necessary stop at a roadside produce stand (this decried with grumpy rumblings from the hungry travellers in the second car). Melons were bought, the first of the season, for this, the first picnic of the season. Baskets were hoisted, dogs wrangled as we made the hike up to the plateau overlooking the entire valley, with just enough picturesque ruins of an ancient chateau nearby to know that you are in France. 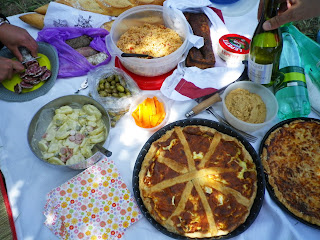 Marie wisely lead us away from the unsheltered spot that I had chosen (but oh what a view it had!) to the shade of a small tree in the middle of the prairie. Blankets were laid and slowly small treasures were put out as offerings. Two quiches, a bowl of taboulé, two kinds of saucissons, olives, my carrots with sun-dried tomato and basil hummus, a bowl of authentic potato salad from the German member of our group, a block of herb and goat cheese bread. Lots of cheese. All simple and largely home-made. I couldn't help but think back to picnics in Central Park where there was often an unspoken competition to see who could bring the most obscure, gourmet treats but not here. Happily, it appears that picnics do not require crystal flutes on this side of the pond; especially as there was no champagne served but a rosé from the Languedoc region, yep, wine in a box, stashed amidst the branches of the tree for safe keeping. 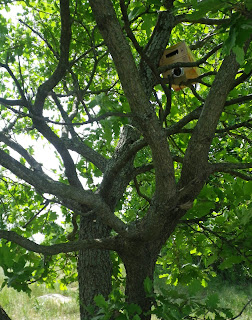 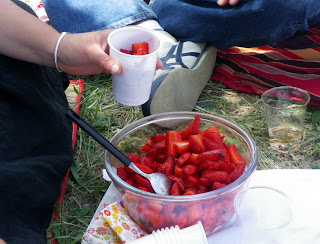 Pick and pick and chat and laugh. A tiny wave of silence and then the whole sequence repeating. Shoes off, dogs settling in at nose level to the food. By the time the strawberries with mint was served the rosé, well, it had warmed us more than the sun. 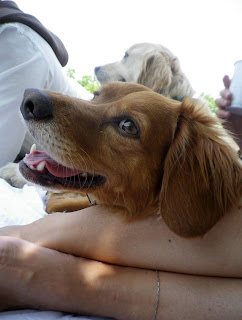 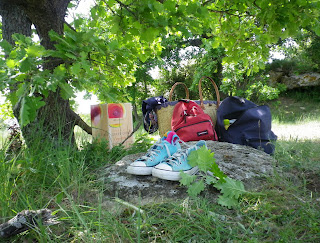 Jokes were made about having been lead to a magic tree whose fruit was actually wine, then "all hail the Wine Tree", then "we are members of the Sacred Brotherhood of the Wine Tree", etc. We all were in stitches. To say that a nap was in order, well, it was mandatory. One of the little ones crawled into a basket for a bit of respite from our silliness as well as a corner of shade. He would later whisper over to me "Heather, stop pretending to sleep." How he knew that I was I'll never understand, nor why when kids whisper they actually end up being louder than when they speak normally. The wise ladies that had made the least visits to the Wine Tree went for a stroll. After an hour or so, a game of charades was launched, which seemed a surprisingly unFrenchy thing to do but appropriate for the lightheartedness of the day. 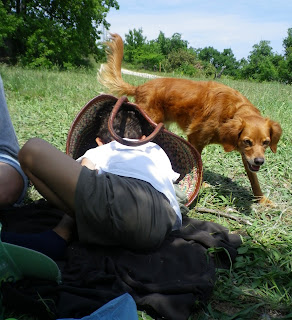 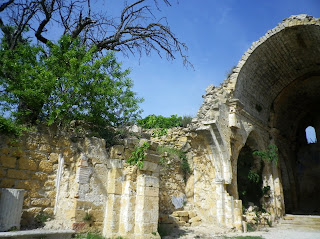 As we headed back to the cars, we stopped off at the 13th century Saint Jacques church that I had written about last November. Marie, who is an archeologist whose speciality is the medieval period, was pleased. But that wasn't our real destination. No, we headed off down past the village below to a site that is one of Remi's and my very favorites. Quite possibly of anywhere in the world. Definitely in the top ten. I didn't write it about it before as we had wanted to keep it to ourselves, but that isn't very generous is it? Looks of puzzlement spread across our friends faces as we pulled into the winery of Chateau Bas. Hadn't we imbibed enough already? 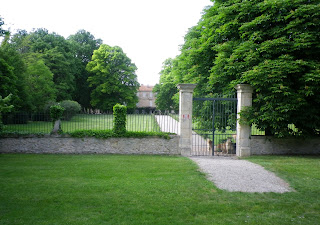 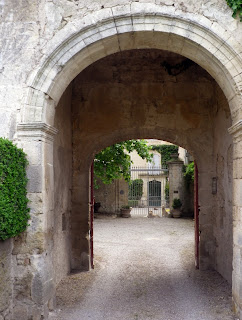 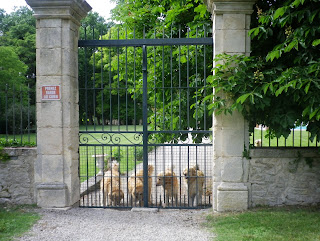 But we weren't here to have a degustation, a wine tasting, at least not just yet. A path leads to the back of the achingly beautiful manor, one protected by a pack of the largest Goldens that I have ever seen (Ben was kept at a distance, goofy boy, he had no idea what to think of all that fierce barking). The way is nearly closed overhead by whistling oaks, the paving stones scarred with the imprint from centuries of chariot wheels. Walking slowly, I felt, as I always do, as if I were Alice falling down the hole, reeling towards another time. 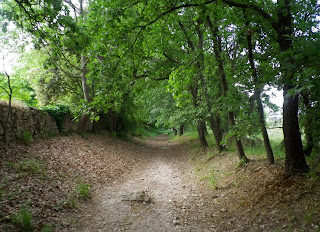 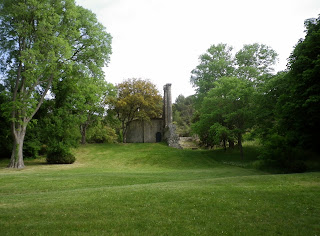 Columns from a Roman temple top a daisy covered rise. This is what we came to see. Built in the first century BC, it is a Temple to Diana, goddess of the hunt, the moon and protector of women and woodlands. The environment is perfect for her. The first time that Remi and I discovered it, I ended up laying on the ground, literally bowled over. "The peace...the peace..." I kept repeating, as if I were stoned. I feel it every time we visit. It just calls to us. 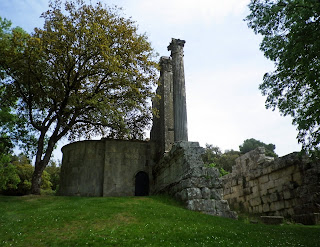 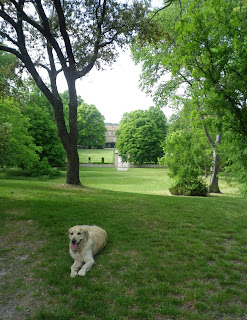 Ben feels equally at home here. I always take time to sit on a large stone under the trees to admire the Chapelle St. Cesaire that was added to the temple's side in 1054. So close together and yet so far apart. Another set of worshipers that kept the land protected. How it remained so even after the French Revolution (when the domaine was divided) is a mystery to me. It seems as if it has always been this perfect place with the manor, the dogs, then quiet. Harmony and elegance defined. 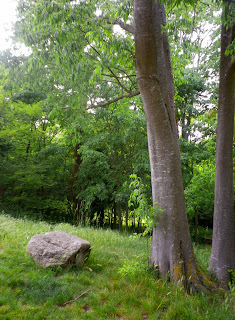 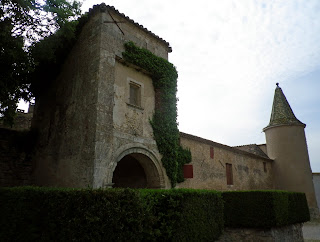 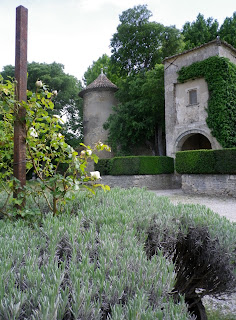 The vineyards are some of the most beautifully kept that I have seen in Provence, something I feel can often be tasted in the wine. Along with the current owners efforts to have their wine be certified bio, or organic, they are also developing enherbement, the planting of micro climates in between rows to help the roots of the vines stabilize and grow deeper while balancing the environment. Though this must certainly lead to a fuller wine, it also makes for a gorgeous setting, with daisies and roses twirling through each other and into the hands of Mathilde and her son. 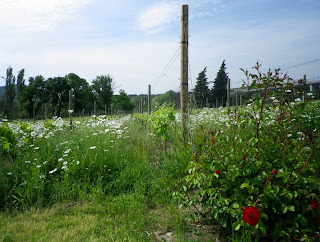 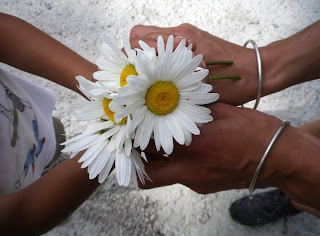 We passed on the tasting but were happy to buy more of the excellent 2001 red Cuvée du Temple, a buy at 16 €. Its nearly smoky depths of Syrah, Grenache and Cab will be perfect with a roasted lamb. The dogs were delighted to partake of the Doggy Bar, an even better bargain at "zero €".  You have to love a wine-maker with a sense of humor. 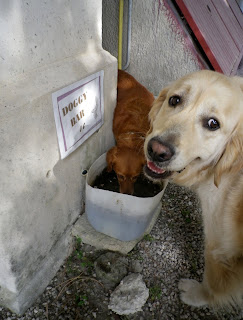 Heads nodded off in the backseat as we drove back through the Alpilles, the light delighting those of awake enough to take in its end of the day waltz. A bit of rest was wise as we were all invited to a bbq that evening on Frederique's terrace. More of the rosé (that had been harvested that afternoon, so to speak) and then red. The conversation flowing like the wine while merguez smoked to crisp perfection. Such good company, even after such a long day, for it was such a special one. I ended the evening singing and then dancing flamenco with one of the children, who remained alert until midnight when we took our leave. Remi would tease me the next morning for having danced alone in the middle of the living room when we got home. He gave up and put in the ear plugs. But that is what joy can do. That and the gifts of the Wine Tree. 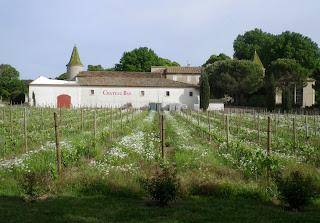