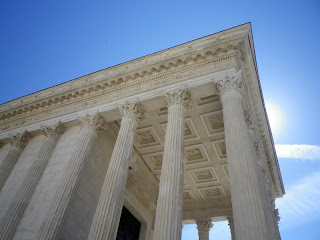 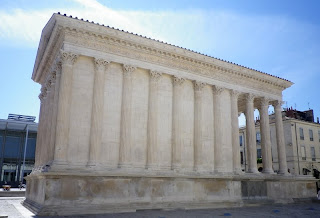 And finally, the last of the posts from Nimes. Did I take the time to research and double check my facts? Not at all! I do believe that I lost what was left of my sanity in one of the moving boxes and still haven't retrieved it. So bare with me if this is another appeal to the eyes and not necessarily the mind.
I do have in my memory that the hard to please Henry James made some sort of remark that the Maison Carrée, above, was the world's most perfect building. Quite a change of pace from his descriptions of Arles, I can tell you. Thomas Jefferson was gaga about it too--enough so to design the Virginia state capital based on its appearance. Regardless, it is still heralded as one of the world's best preserved temples from the time of the Roman Empire. 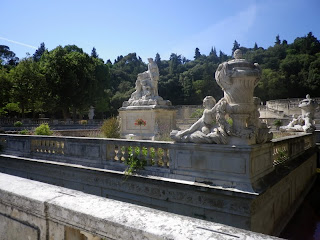 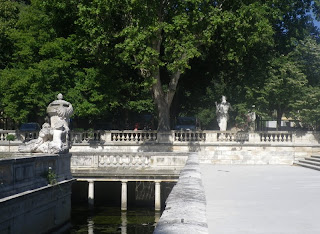 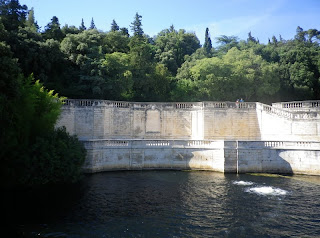 Opulence reigns in the Jardin de la Fontaine or the Garden of the Source where couples stroll with their dogs to escape the heat. It was here that remains of the Roman baths were uncovered in the 18th century and recreated, albeit with an entirely and utterly baroque aesthetic--flying fat cherubs are everywhere! 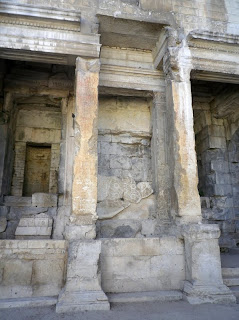 The Temple of Diana, which is thought to have perhaps been a library, is all that remains in the gardens from Roman times. Here, finally, a little well-earned dust and patina. Much more to my liking. The red scrawls, the broken stones, a lost worship. 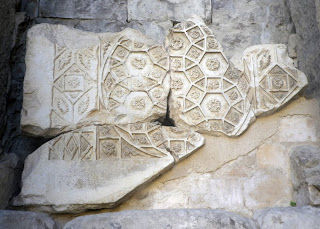 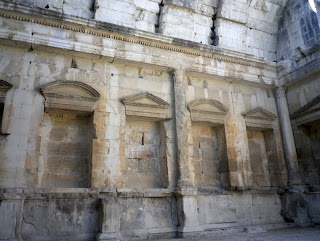 Up and up the steps, nearly impossible after a rosé driven lunch but worth the effort for the incredible view from atop the Magne Tower, which was nearly gutted from the inside (we are talking several stories of rubble) by a wacky gardener that had been influenced by Nostradamus to believe that there was a treasure buried somewhere inside. Silly goose. 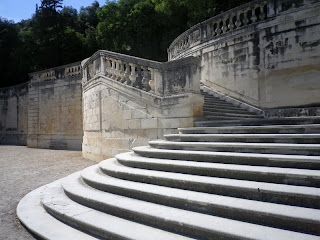 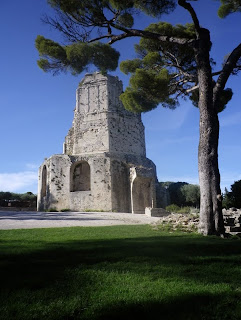 After a short nap on the pelouse, or lawn, we were ready to make the slow descent back to Marie's apartment where we were rewarded for our efforts with what? More rosé, of course! Not to mention the remains of the day's luncheon. We sleepily picked at the the last of the toasts ambivalent to the arrival of evening. It was with a heavy heart that we tread back to the car, having spent nearly twelve hours (!) in the fine company of our charming, Nimois friends. In the midst of so much change in my life recently, it is wonderful to know that there are some things that I can always count on. 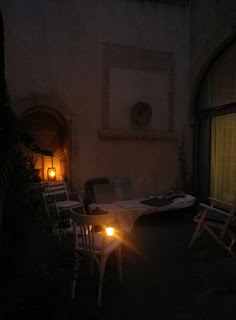 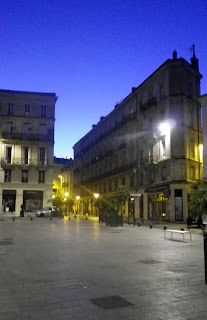