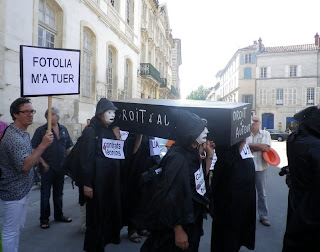 Remi and I just returned from participating in a manifestation or demonstration that was organized by France's union for professional photographers. The point was to raise awareness about how the decline of the droit d'auteur, or the price that a photographer is paid for the use of his images, is drastically hurting photographers worldwide. This is a subject that is very dear to my heart, as it has affected me directly. 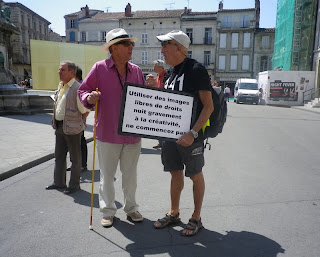 As many of you know, my companion, Remi Benali, has been a professional photographer for over twenty years. His work has appeared in leading publications throughout the world including Time, Newsweek, Vanity Fair and National Geographic. Due to the economic crisis, magazines are producing less content, which means fewer assignments. That loss of income was partially balanced by the sales of Remi's images that have been distributed to image banks such as Corbis and Getty. However, with the arrival of websites like Flickr, where images can be obtained and used without charge, the image bank sales have also taken a nosedive. Remi has been told of photo editors at magazines that are given a bonus for coming in under budget and they do so by sacrificing the quality of the content by using free or inexpensive images. Everyone loses in that case as the public loses interest in the magazines, as they no longer offer a unique perspective. We know of at least five photographers that have been forced to give up their profession due to this turn in events. Press photography as we know it, is endangered.
I know that this a tough subject to bring up in the blogosphere, where little thought is given to a photographer's rights and need to be paid for their work. Why, for example, are there several of Remi's photographs (along with some of my text) on Pinterest despite the fact that they are clearly marked as copyrighted on his website? Musicians have fought to stop illegal downloads of their work, as has the film industry. Photography should also have the same protection, one that goes beyond slapping on a photo credit on a stolen image.
I was happy to see that Lucien Clergue also participated in the demonstration. As the first photographer to have been elected a member of the L'Académie des Beaux-Arts de L'Institut de France, he is putting a very public face to this increasingly alarming problem. 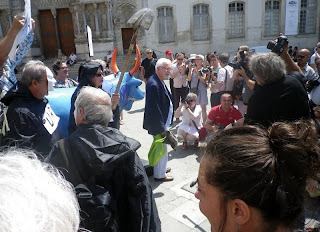