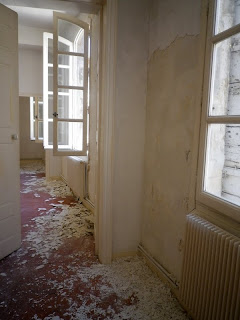 Why do something the easy way when you can do it the really, really hard way? It's my fault, of course. I admit that right up front. We were just supposed to clean and paint and decorate. Basic, non? Well, I found this tiny crack in the stucco behind the double doors leading from the living room. A quick revisit to my vision of the entire length of wall along the street to be in stone flitted through my head. I picked at it, just like that scab that you know will leave a scar but you can't help yourself. A swath of cream--could it really just be the stone, right there, so close? I called Remi in, sheepishly. We started picking a little more, then a little more, looking for the stone's joint. No such luck, it was just plaster, but the more that we dug, the more that we could see that in some places, the stone was visible. 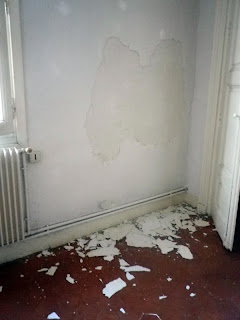 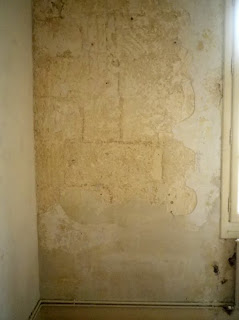 Days later, the stucco is off of the length of the wall. I assumed my rash act and did most of the grunt work with Remi polishing and brushing down behind. He also took care of the covered over placard, which has a lovely faint greenish tint. I had hoped that when we were finally able to open the top half that there would be a hidden treasure stashed inside--a forgotten Van Gogh perhaps?--but in vain... 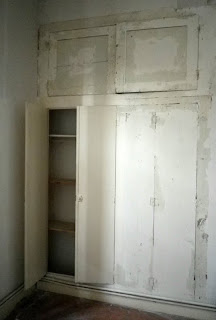 How fantastic to be rid of that linoleum in the bathroom! The tiles beneath, though not the loveliest brown are a close enough match to the rest of the tomettes in the apartment. I proposed a whitewashed parquet to go over it but that idea has been nixed...for now. I also took care of one of the sillier things that had been done--the charming glass panes in the bathroom door had been painted over--not any more! Yes, even with the addition of a sheer curtain, those windows will let in light to the hall. 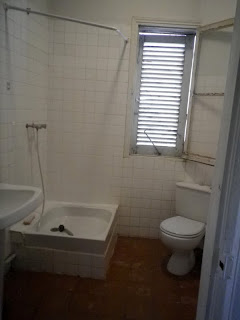 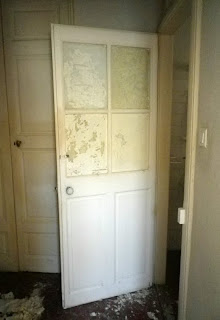 My hands are ripped to pieces and my whole body sore but it feels wonderful to bring out the finer aspects of this beautiful space that has been mistreated for far too long. Remi is over at the apartment as I type, mixing the pigments and materials for the lime-wash that we will hopefully put up today. Then we will get rid of the garbage bags full of stucco and attack the paint. Did I mention that this upcoming week is the Rencontres International Photography Festival and we have friends coming to stay? 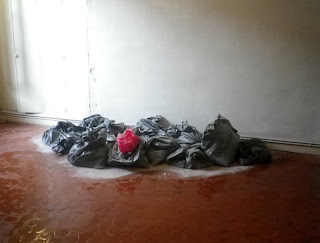