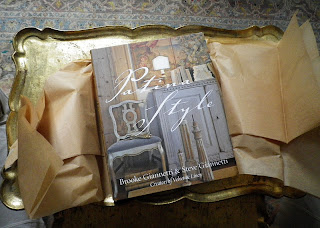 A beret of gray capped the sky as I opened the shutters this morning. Monday, Monday, Monday after a weekend that disappeared with a puff. I had slept poorly, stifled by odd dreams. Not even the cinnamon-scented coffee that I clutched in my chilled hands could pull me towards a decent mood. And then the buzzer rang. "Oui, bonjour?" I croaked out groggily. "C'est la Poste, j'ai un colis pour vous." Really? Instantly, the prospects of the day brightened.
When I saw whom the package was from, my heart did a little loopity-loop. I ran back up to the second floor, lifting it above the reaches of Ben, who was waiting for me impatiently, doing that sly tail wag that makes a Golden golden. Cardboard ripping followed by careful unraveling of tightly tied string and voila! My friend Brooke Giannetti had surprised me with a beautifully dedicated copy of the book that she has created with her husband and partner, Steve Giannetti, Patina Style. Do you know Brooke and her exceptional blog, Velvet & Linen? I am assuming that you do, as she is a well-known figure, especially in the small big world of blogging. But the journalist in me says, "never assume" so if by chance you don't, by all means click over...just as soon as you have finished this post (ah-hem).
Brooke inspires me--and we are talking about in the every day variety--not only by what she does but also by who she is. In our cynical, rough and tumble culture, we all need reminders that yes, hard work does pay, sometimes the good guy finishes first, not last and even if our best hatched plans go awry, it is not the end of the world. Despite her success, she is consistently generous with her time and efforts--including having mentioned me and this blog (despite it's being so small), which might just be the reason why some of you are here. Hurrah! She is one of the people that I consider myself lucky to know, even though we haven't met...yet.
The book that she and Steve have made truly comes from the heart and is a paean to their appreciation of the imperfect, the well-lived. The girl in me who identified heavily with the Island of Misfit Toys can't help but appreciate this but it equally appeals to my aspirations towards a simplified elegance that has nothing to do with a big budget. In a time where showplaces rule, they are more interested in creating welcoming environments where good experiences are waiting to happen, a balm to our hectic world. There is nothing pretentious in their aesthetic, nor do they dumb down to reach a wider public. If I have peaked your curiosity (and I hope that I have), the book can be found at:
Amazon US
or
Amazon France
After being sold out for months, it is indeed in stock. Just in time... 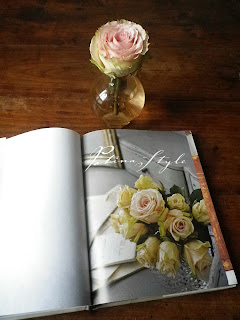