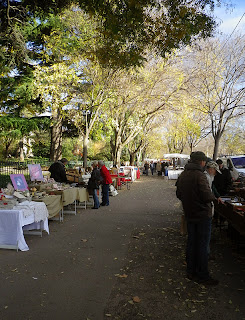 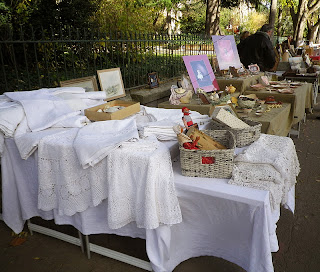 Ben and I were cruising through the outdoor market, searching in vain yet again for decent mushrooms and our missing goat cheese lady when I suddenly remembered that it was in fact the first Wednesday of the month. "Ooh, let's go to the brocante," I proposed. Ben wagged his tail in agreement and off we went. 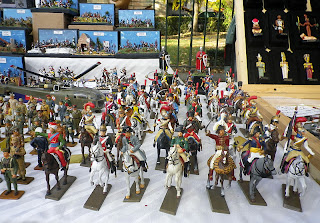 A brocante, or flea market has taken place along the boulevard des Lices for as long as any of the vendors can remember. And while it might look a little rikiki, you never know what you might find. Some time ago, a man bought an old book and found several drawings by Vincent Van Gogh tucked in between its pages. I kid you not. 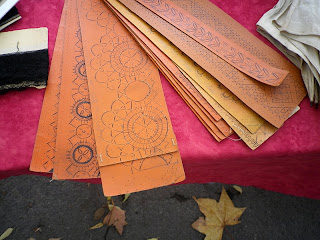 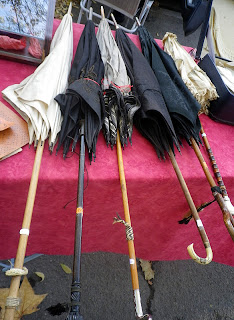 This being Arles, there are many stands that specialize in materials used for the traditional costume, named aptly enough, L'Arlesienne. While the woman next to me fingered a bit of heavy lace for trimming, I made the mistake of running my hand along a bit of fox stole only to have the seller snatch it away while glaring at me with a raised eyebrow. It is true, Ben and I make a suspicious pair if ever there was one. 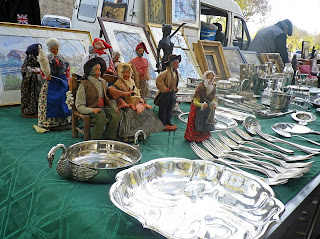 Speaking of typically Provençal items, check out these creepy santons--I have never seen anything like them. The two sailors in the back look like that want to capture you in the net, the scary old maid next to them as if she wants to hit you with her wool batting, the gentleman is hunched in preparation to whack you with his walking stick if you make another move. Then again, perhaps they are just protecting the Mamy and Pappy relaxing on their bench so that Mamy can continue grinding away at her mortar and pestle in order to prepare a killer aoili. 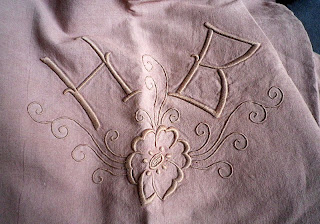 So did I score any goods? Bah oui, mes chéres, if not I wouldn't have taken you along for this little jaunt. For it was the vague memory of dyed linen sheets that made me change my direction in the first place. I found the seller, slightly hunched in a well-worn fur coat, eyes smudgy in blue eyeliner and checked out her wares only to return with Mr. Benali in tow later in the afternoon. He wisely chose three.
(Slight parenthesis in the middle of the post: after typing the word three, out of nowhere popped into my head, "Mr. Owl, how many licks does it take to get to the center of a Tootsie Roll Tootsie pop?" "Let's find out. A one...a two-hoo...a thrreee...*crunch*...Three." For the original commercial see here. I guess this is what happens when I have a big espresso after lunch.) 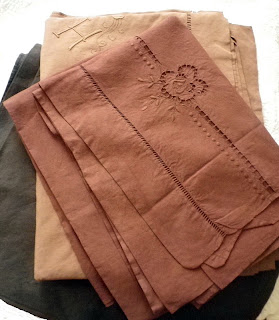 So yes, three. And lovely choices they are. My photos don't do them justice. There is even one with the initials "HB" which are what my initials would be if a certain person and I got married. *cough, cough* As the seller uses her own pigments, the colors are all slightly in-betweenish, such as the vieux rose that she created by mixing "fruits rouges et chocolat"--it sounds like a dessert! The mocha has a pinkish hue and the thick gray a metallic deepness to it. They are far too pretty for the linen closet and I can't wait to make up the bed with them. 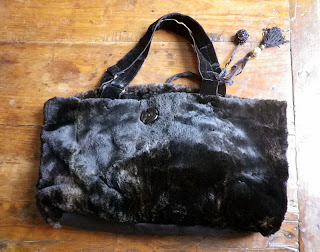 Something I couldn't resist...the one luxury seller at the brocante (Hermés scarves for 150€), also was offering this one bag, sewn by a friend out of an old beaver fur coat and topped with velvet handles as well as a tassel and a jet bead ornament. For only 30€! I adore it, which means that I am finally giving the Sonia Rykiel leopard-print pony tote that Remi bought for my birthday a well-deserved rest. And so, while I should be out buying Christmas presents for my friends and family, I am instead focusing on...myself. Bad Holiday Karma! Bad! Will someone please help me dig into the spirit of things? This year, it has remained elusive but I really truly need to get cracking!
Posted by Heather Robinson at Friday, December 09, 2011