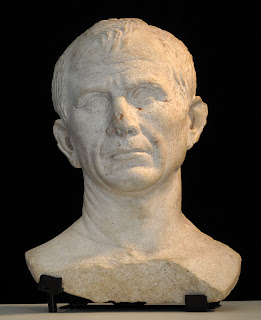 I never take my splendid surroundings for granted. Every day, I walk through history, passing monuments of incredible importance as I go. Such it is to live in Arles. 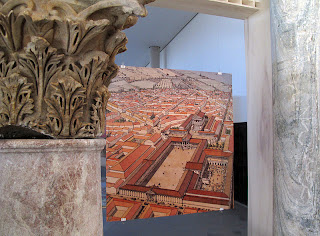 And of course, I am far from being la seule, the only person who knows what treasures can be found here. The Musée Départemental Arles-Antique (or the Musée Bleu as it is affectionately called by the locals in reference to the shining blue exterior) is home to one of Provence's most important collections of Roman antiquities. Last Tuesday, while the museum was closed to the public (save for groups of giggling students), Remi had a phenomenal opportunity to photograph its masterpiece and I happily agreed to be his assistant. 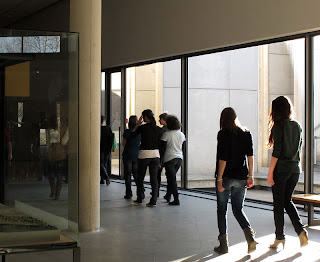 The discovery of a bust of Julius Caesar in the waters of the Rhone River made headlines around the world. Although its provenance has been disputed, it is generally considered to be the oldest such bust and one of the few that was carved during his lifetime. We were able to spend hours in front of it and never tired to be under the Emperor's gaze. His brows are furrowed, from one side he appears victorious, the other defeated. Under the pop of the studio lights he seemed alive, as if he could bark out orders for us plebeians to bow out of his fine presence. Several times I was mere inches from his face. It was as good as dancing with the Mona Lisa. 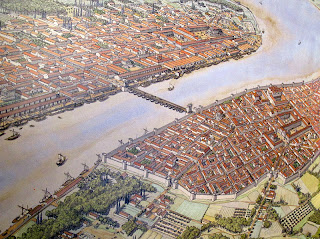 Caesar and the rest of his formerly underwater companions, such as the bearded Neptune below and the floating Victoire, will be featured in an exhibition at the Louvre this March, following the monumental success of "César, le Rhone pour mémoire" in Arles in 2009. But the museum is not resting on its laurels, far from it. The archeological digs in the Rhone have continued, including the Arles Rhone 3 project that Remi is documenting for National Geographic. Currently on display is the work of Jean-Claude Golvin, an archeologist with the National Scientific Research Center that has given 1000 of his incredibly precise watercolor paintings to the museum. 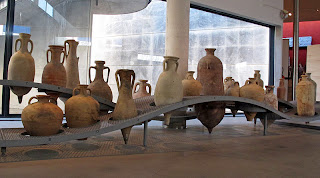 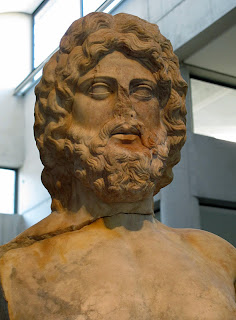 The paintings have been installed to great effect. A long funeral procession enlarged to life-size lines the sculpted sarcophagi and throughout the watercolors are organized by theme to create a greater understanding of the Roman way of life. Jean-Claude Golvin's exhibition is running until May 6th in Arles and I highly recommend it. For further information, please see the Museum's website. 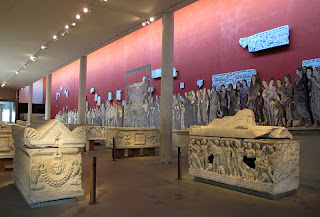 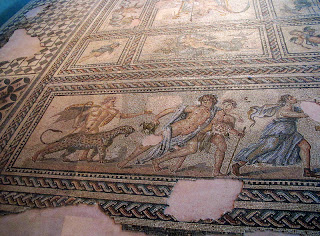 When Remi wasn't in need of a helping hand, I left him alone with Caesar and wandered the museum alone. What an incredible luxury to have so much beauty all to myself. I have long been fascinated by the enduring appeal of mosaics and always see something new each time I gaze at the museum's floors, found while renovating a home in Trinquetaille on the other side of the Rhone. The flow of a toga, the curve of a leopard's back... 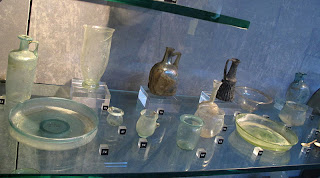 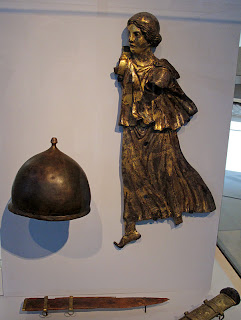 As the afternoon wore on, the light slid across the roof, sneaking in the windows, pulling long shadows on the maquette or model that depicts what Roman Arles looked like. I could practically smell the fires burning and hear the cries emanating from the Arena. 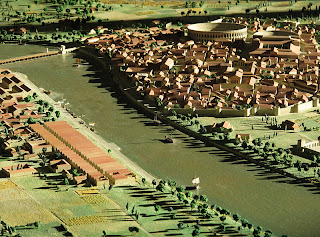 Certainly there were elements of brutality to those times but the overwhelming sensation while regarding the artifacts is one of finesse. Such delicacy was used in the creation of even the most common objects. How much we have lost in that regard, thinking that everything is disposable with often a weary nonchalance for the seen and unseen world around us. Two steps forward, one step back, a different kind of dance. As we packed up our lights, I felt the weight of Caesar's expression one last time before the security glass separated us and wondered what he would say today if only he could speak. 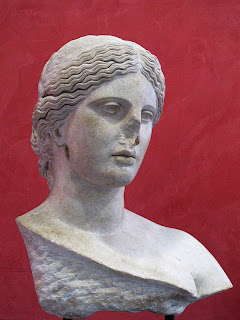 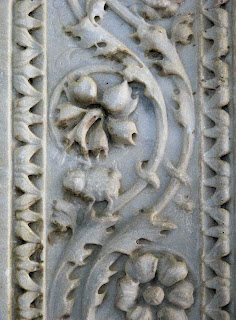