Remi's work in the New Yorker 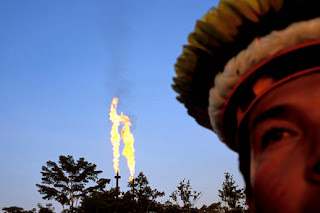 ©Remi Benali
I am thrilled to let you all know that one of Remi's photographs will be in the January 9th edition of The New Yorker. The photograph illustrates "Reversal of Fortune," an article by Patrick Radden Keefe concerning the lengthy struggle of the Ecuadorian people to hold Chevron financially responsible for the pollution created during the company's twenty-year drilling process (under Texaco at the time) in the country. It is quite simply, the largest environmental suit ever and a case of David versus Goliath if ever there was one. Those of you that read the New Yorker will know that the use of photography in the magazine is fairly recent and remains rare so we are doubly pleased that Remi's photograph was chosen for an issue that is dear to our hearts.
Remi first captured the story while on assignment for Vanity Fair magazine. His photographs accompanied the article "Jungle Law" by William Langewiesche in 2007. Remi's experience while shooting in the midst of the Ecuadorian rain forest was both challenging and striking as he captured some of the 900 oil waste pits left behind as well as portraying those suffering from cancer (the risk of death by the disease is up to thirty times in the region than elsewhere). For further of his photographs on the subject, please see his website but again, as these photographs are copyrighted, I ask that they not be borrowed or pinned. 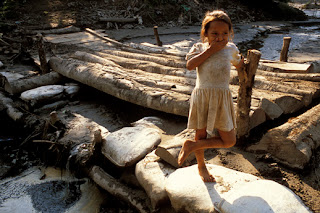 ©Remi Benali
UPDATE: Today, in a surprising turn of events, the Ecuadorian appeals court has upheld its condemnation of Chevron, holding them accountable for $8.6 Billion in damages. Additionally, if the company does not publicly apologize to the Ecuadorian public, the fine will be doubled to nearly $18 Billion.