*This is  repost of the original from April 25, 2012 that was taken offline in a flurry of spam frustration. Oops. Here it is again.* 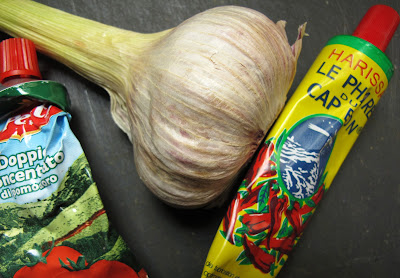 As Remi has been away for the past day and a half, I have been thinking about what it is that I like to cook when I am cooking for one = me! Admittedly, most of the time when he is away from home, I put the kitchen in shut down mode. We cook in this house and because we both work from home that means two meals a day. Now lunch is usually of the salad variety but that can still require a lot of preparations, so it can do me a bit of good to just subsist on casse-croute, picking at bits of this and that.

The first evening I eyed the (albeit home-made) leftover pizza. Certainly that was the obvious option. But it just wasn't ringing the tummy bell. What about that bunch of broccoli that was languishing in the veggie bin? The one that I had bought even though Remi doesn't like it? Allez-hop! Now or never time. So I decided to make a pasta, arrabbiata-style. Why? Because, with the addition of a couple squirts of smoky harissa paste, I could make it as spicy as I wanted! As some of you might know, the French by and large (excuse the generalization) are not into culinary heat. Not so for this girl who used to go the East Village Indian guys so that she could gleefully cry into her curry. Another bonus? As the smoochee was nowhere to be seen I could spike my tomato sauce with as much garlic as I could see fit. And not just any garlic but le nouveau ail, the fresh variety, which frankly, I am addicted to. I can eat it raw like bonbons, just like some of the local old-timers do. A sauté of le bacon (think Canadian), yellow onions, fresh flowering thyme (a luxury in itself), herbs de Provence, red wine (I just happened to have some in hand, quelle surprise) and it all came together into just exactly the taste that I wanted. No photos because, even if I did think about it, it was in my belly too fast.

Not so the next day when I redid the same adventure for lunch. What do I want? Two other banned ingredients came to mind: red cabbage and raw pois chiches or chick peas. I added a little extra laitue that was on its last leaves, tuna, roasted peppers, shredded carrots, Trader Joe's salt-free 21 Season Salute (why oh why aren't there TJ's here? Why?) plus a simple vinaigrette. It took me back to when I was a young 'un living in NYC and I ate this salad all the time so I had the added contentment of memories à la Proust with each munch.

Not that Remi is a food dictator, not in the least and he is more than patient with my no goes of beef, les abats and frog's legs (I have done it but no they don't really taste like chicken). True, he is the real chef in the family and is not afraid of attempting anything. Petits paquets de coquille St. Jacques au foie gras et bacon avec une reduction d'homard? Bring it on! I am just the comfort food girl, as you can well see. But it was really lovely to be a little selfish in my preparation and it got me wondering, what are your favorite tastes? The ones that you go to time and again for a little boost? That are "yours"? 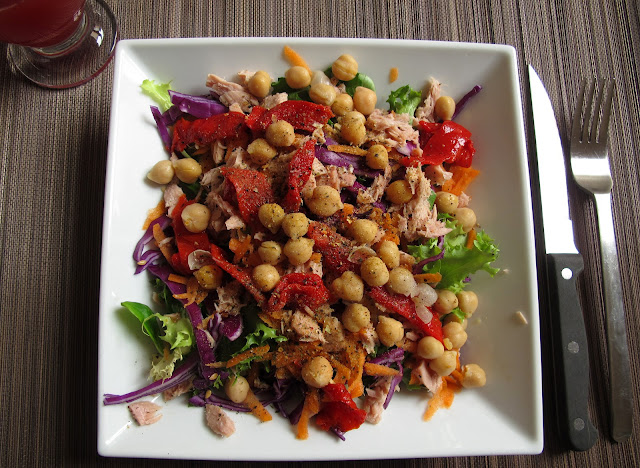