My Dream House(s) in Arles 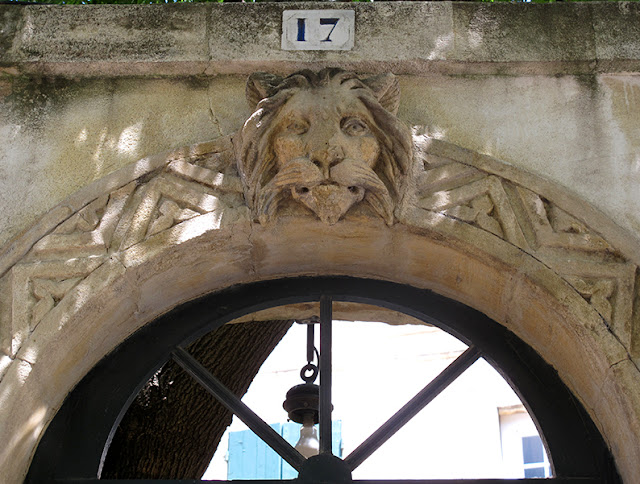 For some time I have been trying to choose what is my all time favorite house in Arles--and I need your help! All of them are in the neighborhood surrounding the Arena, which finally is not such a surprise. The area is the most sought after in Arles and has been since Roman times as it is on a hill, high above the possible floods of the Rhone River below. Car traffic is limited by the winding, rising streets and so la colline retains a wonderfully quiet and elegant character all its own. 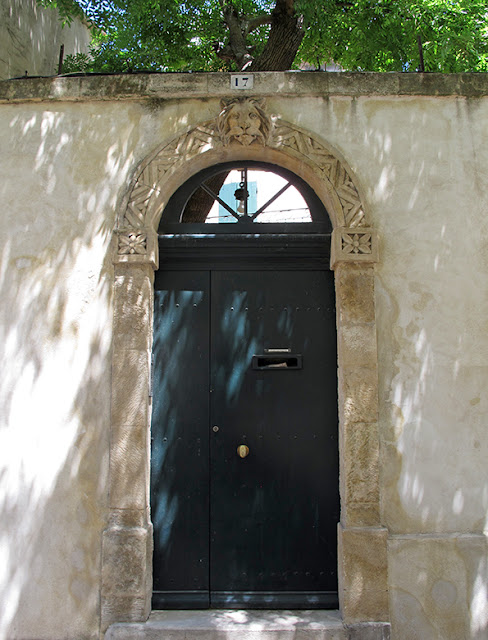 This ancient city is full of surprises and appearances can often be deceiving. A seeming doll's house might open onto an enormous complex fanning out from an innocuous front door while a long facade may only be one room deep! Crooked, graffiti-strewn walls disguise a magnificent jardin à la francaise replete with pool and fountains only visible via Google Earth. The cadastre or land registry office keeps maps that read like a maze with centuries of construction built smushed up against, on top of or even underneath another. So I hope that you will use your imagination as we visit. After me, if you please... 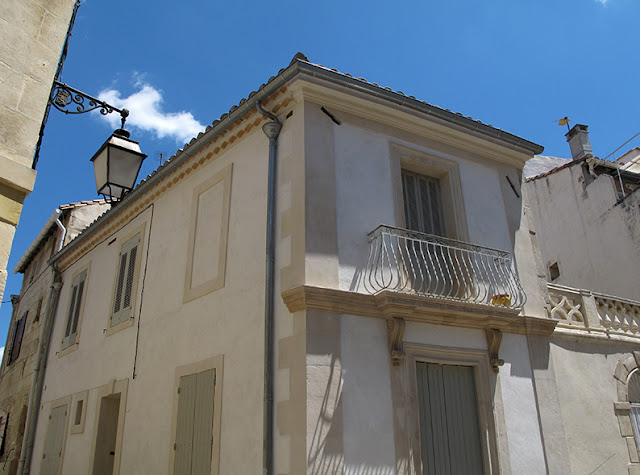 Admittedly, this house has sentimental value for me as Remi and I spied it with a For Sale sign attached on our very first visit to Arles. The house swerves around in an L with a large enclosed courtyard to the right so that it receives sunlight throughout the day. The rooms are well-proportioned, neither too grand nor too petite. It clearly has been well-renovated with an ivory and cream stucco exterior highlighted with greige accents on the shutters. 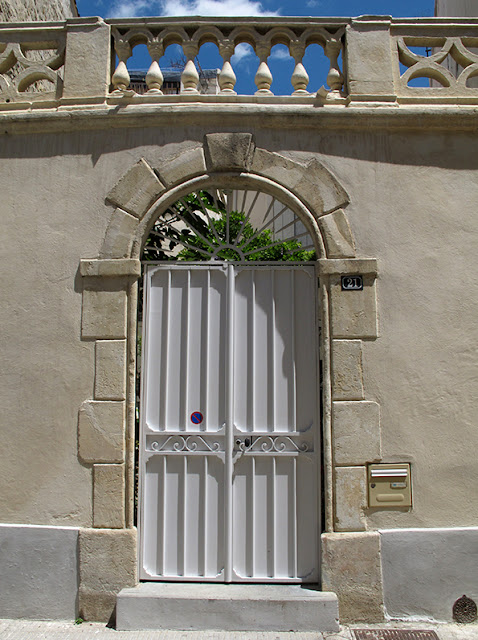 There is a small terrace above the courtyard and the wrought iron balcony looks directly on to the Arena. Here in the South, it can be a big advantage to have several outdoor spaces to enjoy depending on the time of day and the force of our Mistral winds. 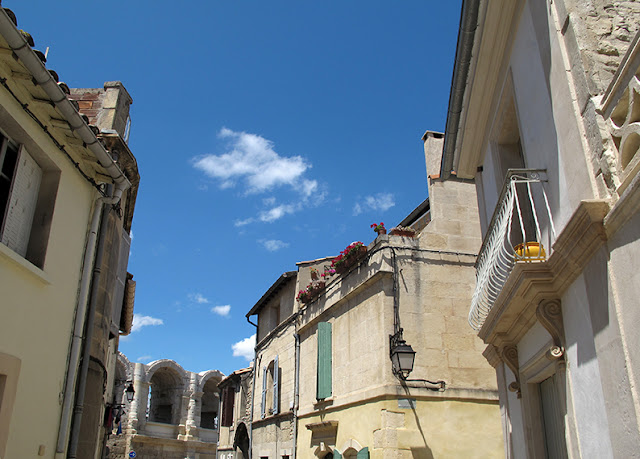 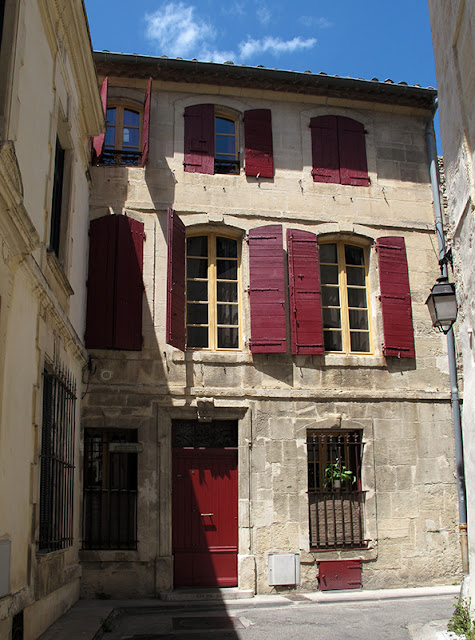 Deceptively difficult to photograph, this house seems far smaller than it is in reality but it is un vrai bijou. Imagine an impressive Provençal mas in the middle of Arles, with creamy stone walls, exposed wooden beams on the ceiling as well as long 18th century rounded windows to let in the light. A really good energy emanates from this house and I often hear children's laughter when I pass. 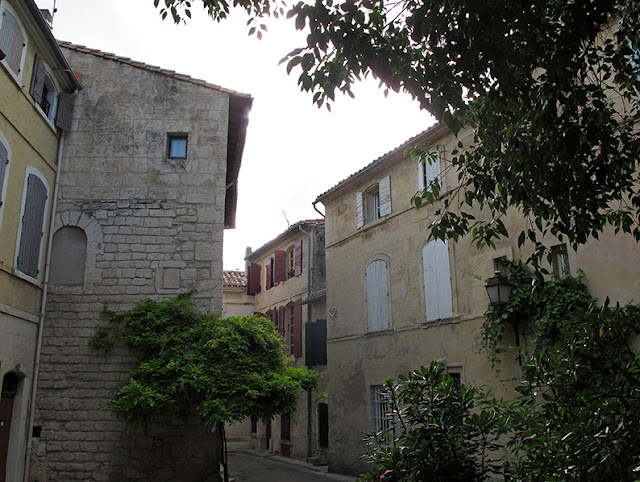 To the right is one of the prettiest and most secret squares, in the center of town but with no noise but birdsong. It feels as if you are in the country. 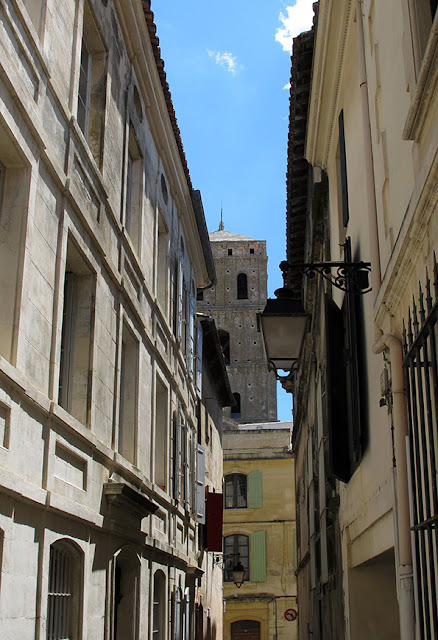 And directly in front, down a tiny impasse, the tower of Saint-Trophime looms overhead. 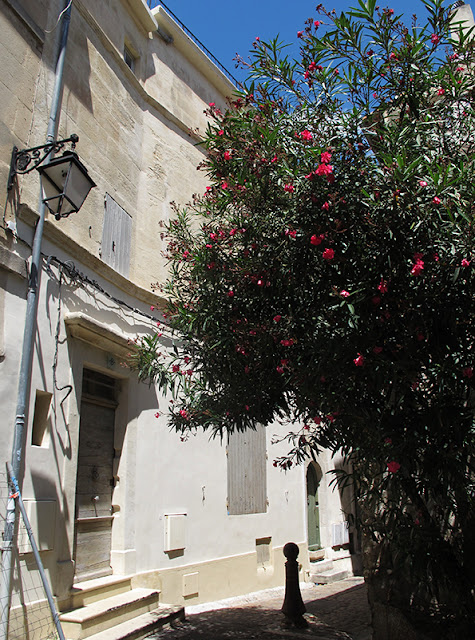 We first met Bruno, a brilliant but utterly cantankerous mason, while he was renovating this house. Not happy with a simple stucco for the exterior, he revived an eggshell technique from the 17th century which creates an incredible smoothness, not to mention a depth of color. The rest of the house was met with the same care. He carefully reproduced the stone detailing on the facade so that it is impossible to see what is old and what is new. 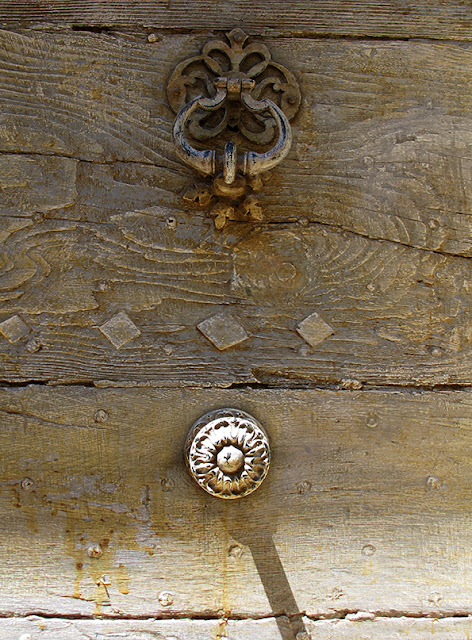 Untold layers of wash were used on the front door to create patina, one expressly not too perfect. Just  inside is a sweeping stone staircase leading to the upper levels including a terrace and solarium. The house is on one of Arles' most charming cobblestone passageways with several views on the adjacent Arena. 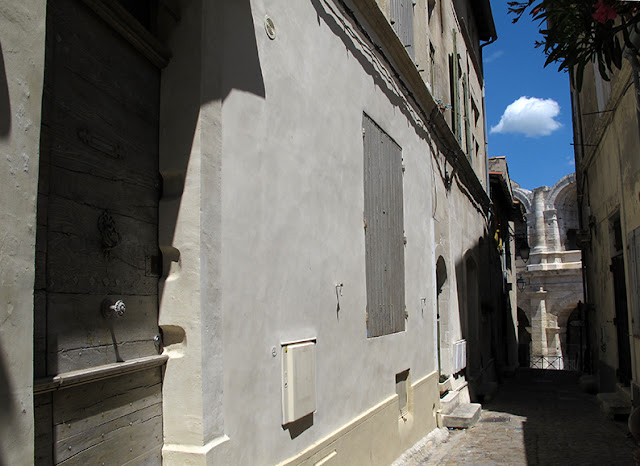 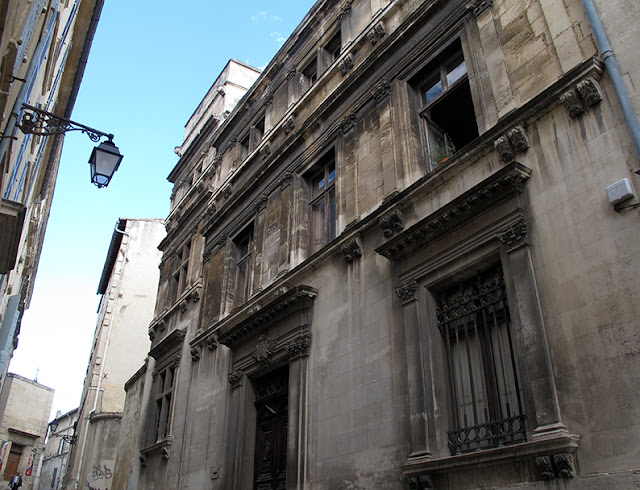 Halfway up the prestigious Rue des Arenes lies the formidable Hôtel Forbin-Soliers, not a hotel in the contemporary sense but a hôtel particulier or mansion. While heavily renovated in the 19th century, it has retained many of its finest 16th century features, including decorative pilasters and Corinthian capitals in the antique style, as was fashionable at the time of its construction. The stone facade has not yet been renovated but could easily be restored to a gleaming splendour. 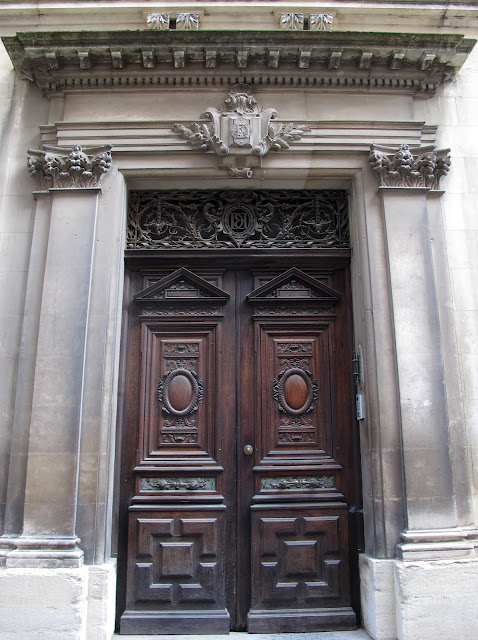 Those of you that have read this blog for a while have undoubtedly seen this entry door a few times as I never tire of photographing it. I find it the most beautiful (if not the most ornate) of Arles. While I was trying to find an angle to fit all of it in, an extremely elderly woman slowly approached and entered without giving me a second glance. 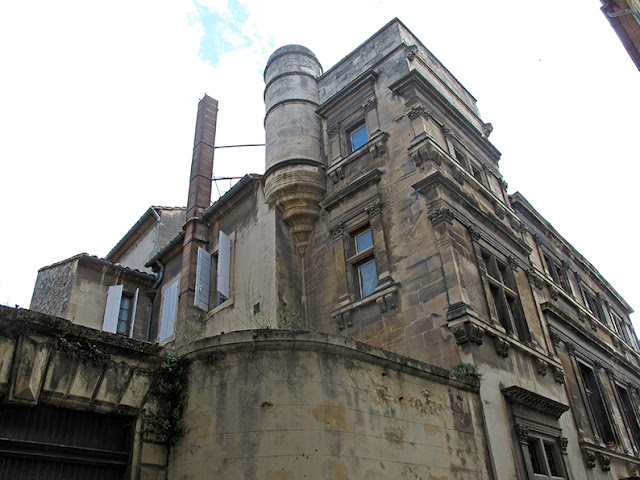 In accordance with the period, the house has its own watchtower that is usually attached to a terrace, one that would have views over nearly all of the town. To the left is an expansive courtyard. It is difficult to truly know the size but I believe this to be one of the largest houses inhabited by a single family in the Historic Center of Arles. 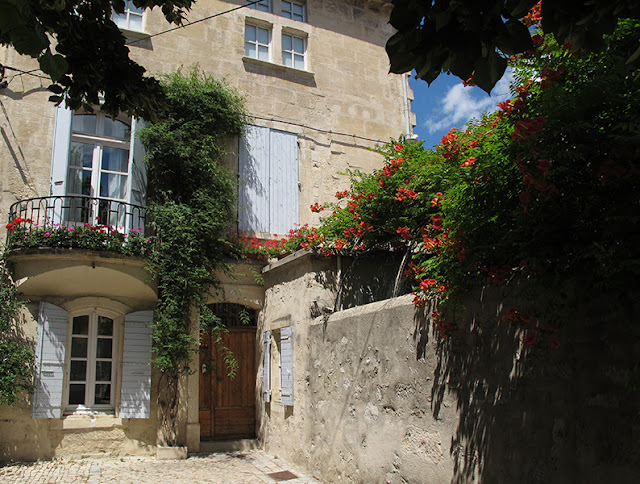 The most elegant house architecturally speaking, is on another hidden square, right next to the Arena and yet completely off of the tourist radar. The right of the ground floor opens up onto a long enclosed garden that is completely private and covered with a tunnel of blossoms. 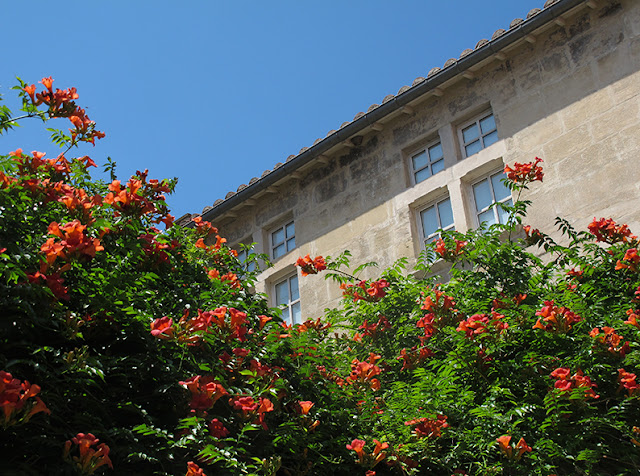 The Renaissance fenêtres à meneaux,  or divided windows (here with the shape of a cross), that line the upper floor have a clear view of the Arena. 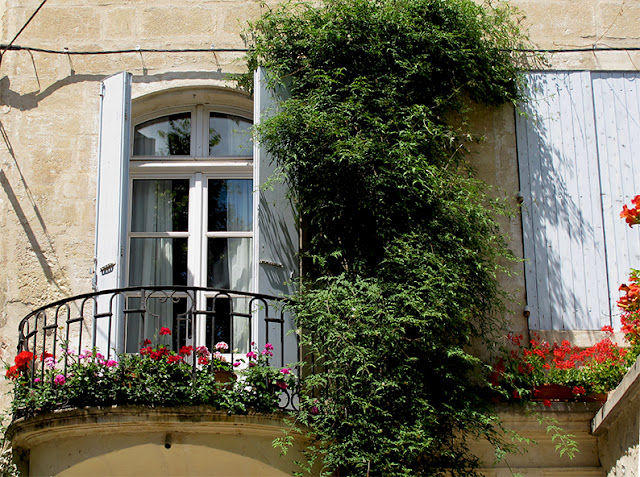 A charming balcony in demi-lune form protrudes over the garden. Most often in such fine homes of the period, this level would hold the receiving rooms. Creeping vines along the perfectly renovated stone facade give an additional charm to this clearly well-loved home.

***
So what do you think? Each is interesting in their own right and I know that I would be thrilled beyond belief to inhabit any of them but I am looking forward to hearing your thoughts! It is good to dream, isn't it? As I mentioned in my previous post, I have given one guided walk through Arles and am open to doing more. What do you think--would you like to see these houses in person? 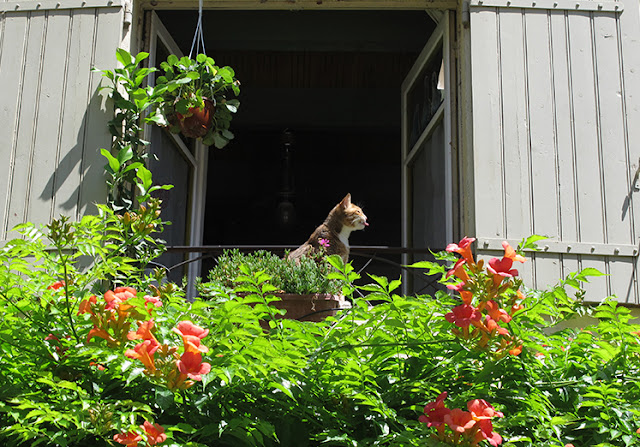 And for those of you cat-lovers out there (and you know who you are), I couldn't resist sharing this photo, taken on the same luxuriously blooming square as above...