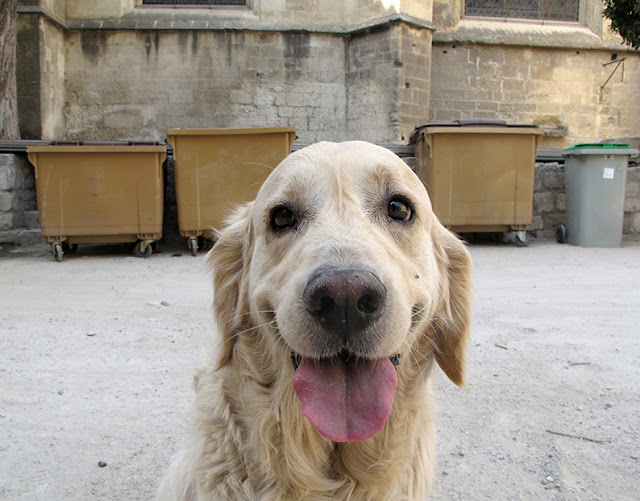 In keeping with the theme of the happiness that our dogs bring us (or cats too!), I can't help but share a series of videos that I took the other day despite the fact that I had other posts prepared.

The other evening the light was lovely and I thought that it could be a good moment to try and capture a certain video that I had in mind for a while. Following the interest in My Dream Houses in Arles, I had decided to film some of my favorite haunts around town and started with the Cour de L'Archeveché where I go frequently to play with Ben.

Save that Mr. B obviously had another plan in mind and decided to become a dust-ball. Here is demonstrating his infamous "Digging to China" move, one that is put into motion only in moments of utter abandon.

And then, for only the second time in his life, he jumped into the fountain in the middle of the Place de la Republique, much to the delight of a large group of Japanese tourists who applauded and filmed the entire thing. Me? I was laughing too hard as you can hear! I especially love his stoic expression. Ah, to be a dog during the Dog Days of Summer!

Thank you all so much for your kind wishes about my Sister's visit. She has arrived safely and we are having a wonderful time!