Past Adventures: I dream of...elephants 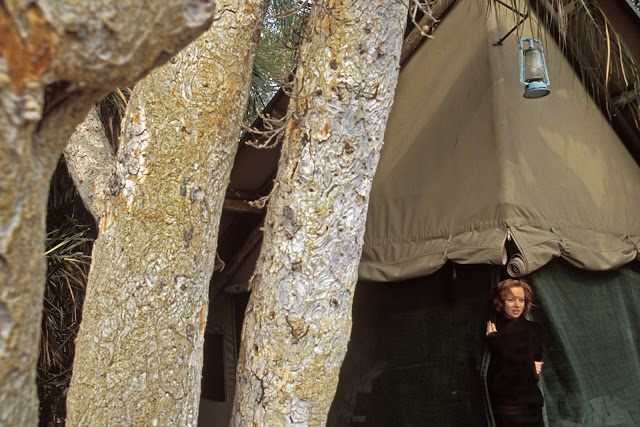 It has been quite some time since I have contributed to this series, one that focuses on some of the previous adventures that my companion, Remi and I experienced during our whirlwind years of working as a team of travel writer and photographer for the French press. Today's post is not at all something that I had planned but was delightfully surprised by a fun cross in the wires of the internet. It is a long one, so feel free to settle in with your morning coffee or an evening glass of wine.

Jeanne, of the charming blog I Dream Of, recently made a post for her husband's birthday in which she included several photos of their travels together. I immediately had a hunch that I recognized the elephant in one of the photos. Our world is so overwhelmingly huge and yet there is that inevitable six degrees of separation, one that apparently applies to certain famous pachyderms as well! For Jeanne and her husband as well as Remi and I had the great fortune to experience the wonders of Abu Camp, a luxury tent resort in the Okavango Delta in Botswana and to meet the elephants that make this safari so exceptional.

To read about Jeanne's experience on her honeymoon, please click over to her links about Cathy and the herd as well as an evocative description of Abu Camp. Both are beautifully written and the first even features one of Jeanne's watercolors (many of her fellow blog friends are looking forward to what direction she will take with her art, having recently had the courage to leave a lucrative position in the fashion industry). 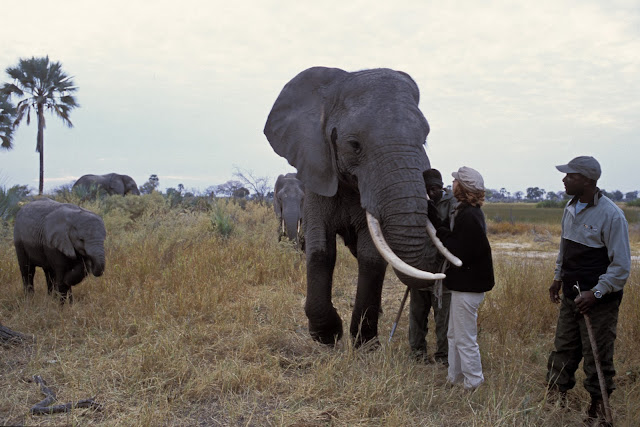 Remi and I found our way to Abu Camp for a very different reason. When we received the call from TBWA in Los Angeles in 2004 about the possibility of shooting an ad for Apple and their software Final Cut Pro, it was beyond anything that we had ever hoped could happen. They had a very specific concept for the ad featuring a man sitting in a tent on the plains of Africa while editing a film on his laptop (inspired by a wildlife documentarian) with animals in the background during the "magic hour" of either sunrise or sunset. 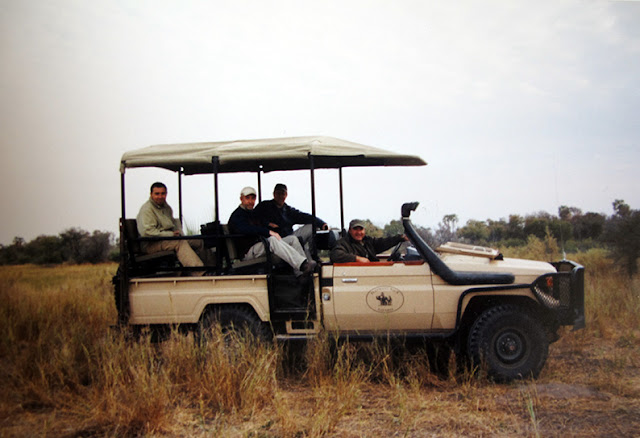 Now, this idea posed a challenge for one main reason--the animals! Such wild animals will either flee or attack in such a situation so we needed to think outside the box. As I was working on the project as a producer, I first contacted the amazing Giraffe Manor outside of Nairobi, who kindly referred me to another possibility, one that suggested the tamed and trained elephants at Abu Camp. After hours upon hours of negotiating with the Botswana Film Commission, we received our shooting permit. Due to scheduling, we were able to rent out the camp in its entirety, along with the elephants as well as their capable handlers...but only for one weekend! 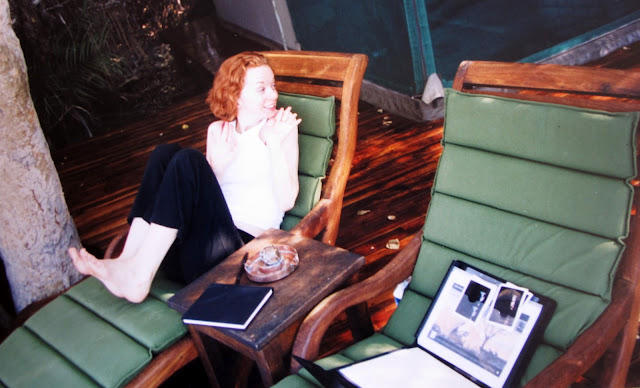 So, as thrilled as we were, the pressure was most certainly on. We arrived on Friday evening along with Bob, the model and Adam, the Artistic Director sent from TBWA's Johannesburg office (you can see the team above in the safari vehicle that is driven by Al, the camp's convivial owner). Immediately, we started to scout for a location--in advertising the client expects that their rough sketch for the ad be reproduced exactly as drawn--across the glorious terrain. 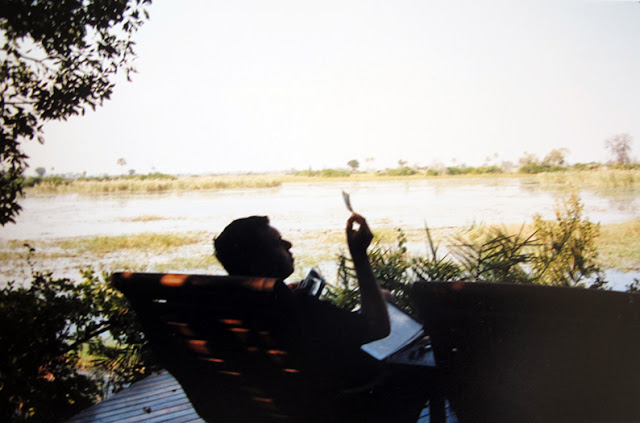 We only had four shooting sessions--yes, two sunrises and two sunsets. Our days were spent looking over the polaroids from the previous shoot and searching for other location possibilities. Alas, there was not a spare moment to partake in one of the elephant-back safaris for which the camp is so deservedly famous. 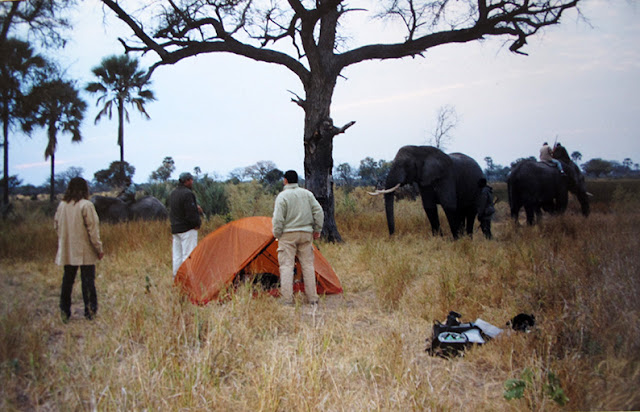 The shoots themselves were incredibly complicated, involving technical precision on Remi's part (can you believe that this was before he had changed to digital so he had to rely entirely on his gut to tell him whether he had the shot or not?). It took great courage on Bob's part to sit inside the tent with the elephants so close by as their handlers had to be out of the shot. At one point, the baby elephant (at a mere two tons) charged Remi, who held his ground, crisis was averted and he gained the respect of the handlers.

©Remi Benali, please do not Pin, borrow or steal

And the result? We did it! On the very last shoot, it all came together. Talk about relief! Above is a small representation of the ad taken from Remi's website. Was it well received? The team at TBWA forwarded an email from Steve Jobs with his two word response: "Love it." 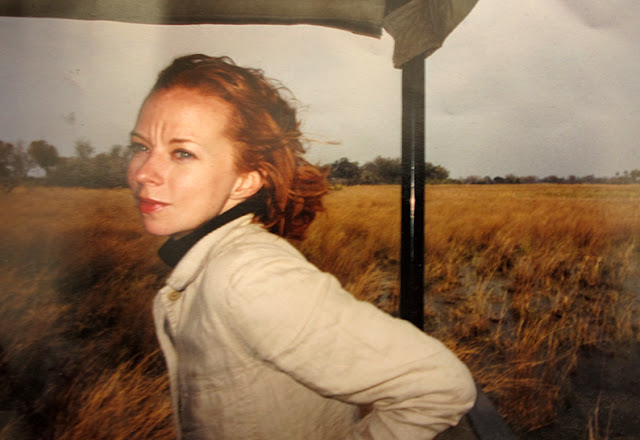 As it would happen, our last day at Abu Camp also happened to be my 35th birthday. Along with finally getting to spend some quality time with Cathy, the matriarch of the herd (and the link with Jeanne), we were surprised with a bottle of Veuve Clicquot by the truly fantastic team at Abu (albeit also to celebrate the wrap of the shoot) and then we headed on a quick safari while en route to the tiny plane that would take us back to reality. I had just spied a momma lion and her cubs when the above photo was taken. It is my favorite photo of me ever, capturing a moment when I was filled with utter confidence and joy.

What magic life can bring. Our time at Abu Camp was short but so incredible that with the distance of time, I have a hard time believing that it actually happened. But it did and I will always hold the memory of walking amidst the elephants on the finest birthday of my life (so far) very dear to my heart. I dream of them still.

Thank you for staying with me for this long post. Wishing you all a wonderful weekend and for those of you in France, an excellent Bastille Day!