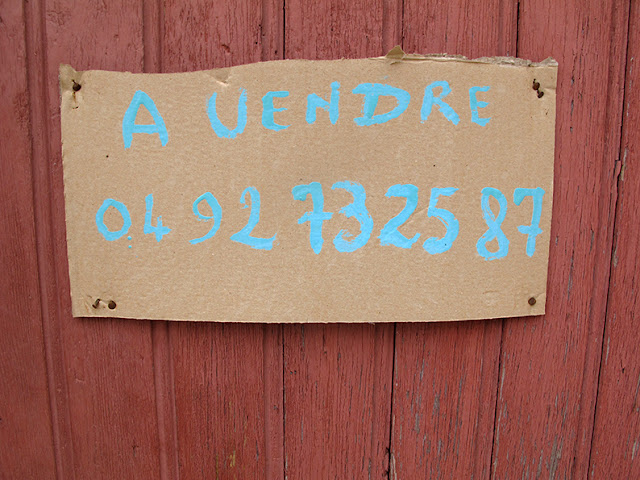 I blushed. For within minutes of having met lovely Jennifer in person, she had tossed out, "You know what I love in your blog? That you and Remi are always pining after some house or another, imagining what it would be like to move to some place new." Ooh, busted. She nailed it! The heat rose to my cheeks. We can't help it. Remi and I are both nomads for different reasons--me from having moved around so much during my childhood, he for having travelled the world for most of his career. We are always open to the next possibility. Or at least willing to entertain it with a daydream or two. 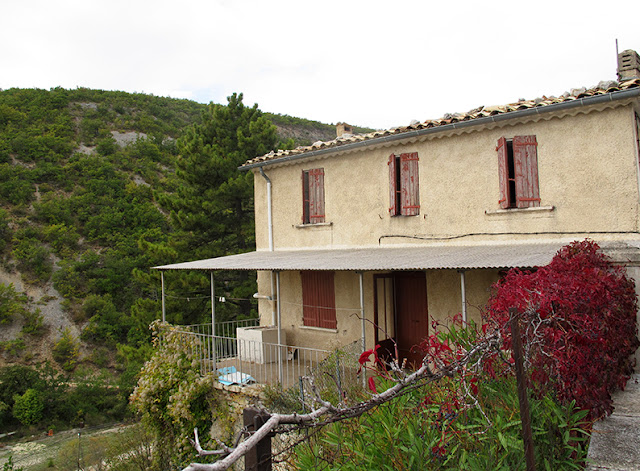 When we explore, we wander, often aimlessly travelling down this road or that, happy to be in each other's company with our Golden, Ben, looking out the back window. Many a time have we come screeching to a halt to better take in a happy surprise. So it was with the house for sale roadside on the outskirts of Banon. 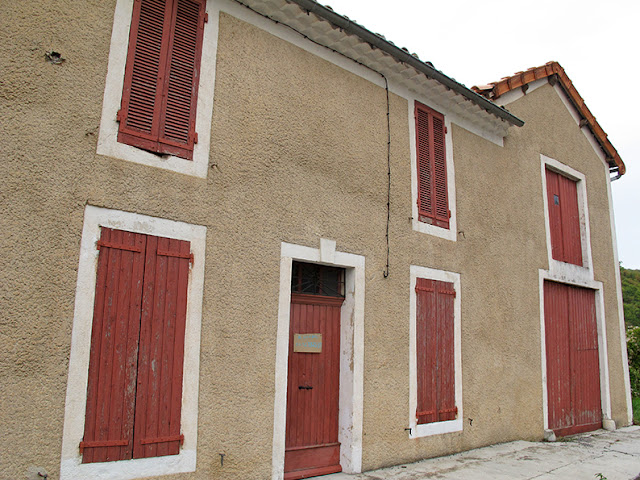 Remi saw his plan immediately. "The garage could be transformed into a gallery with an atelier above and the rest of the house looks big enough that it could be..." "A B&B?" I interrupted (as I am too often to do). "Exactly." 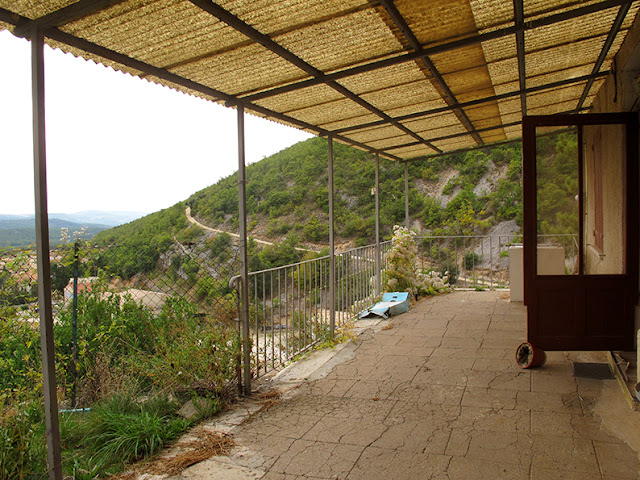 We were immediately taken by the traditional layout of the house, with its rooms sprouting off from a central stairway, as well as the deep porch off the side. Can't you just see how lovely it could be? Oh, I would gleefully tear down those yellow plastic panels and build a tonnelle to be draped in wisteria and roses. Up would come the cement and down would be laid age-worn dalles de pierres in its stead. I would keep the lovely screen door, imagining its satisfying bang each time someone would head back into the kitchen to fetch another bottle of wine. 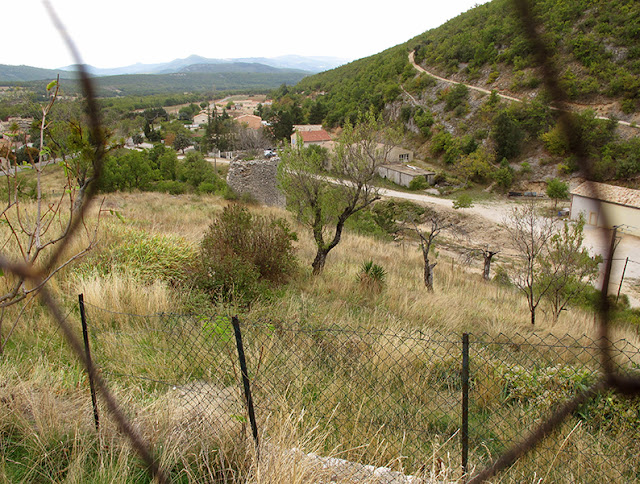 The view of the surrounding mountains opens out with welcome arms and an absolutely massive garden slopes down in descending terraces from the porch. My heart goes out to that forgotten land, dotted with a few scraggly accidental trees and waist high weeds. What could it be? What must it have been? 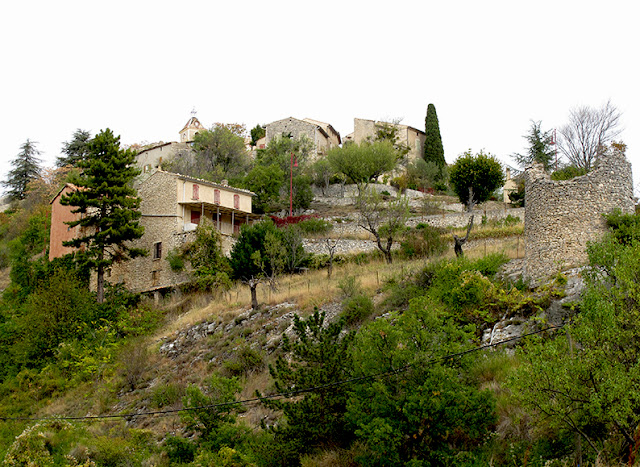 We decided that we needed a closer look and poked around until we found a dirt path that stopped just below the property's baseline. Apparently our zooming back and forth was worrisome to one of les voisines, whom Remi noticed peaking at us from behind a partially drawn curtain. Didn't she know we were on a dream hunt? We were well-rewarded with our new perspective as the ruin of an ancient tower or pigeonnier took shape. What could we make of that? A nap house? With a star-gazing platform? And just look how close the house is to the village. We could have unlimited access to gooey goat cheese and spiky saucisson! 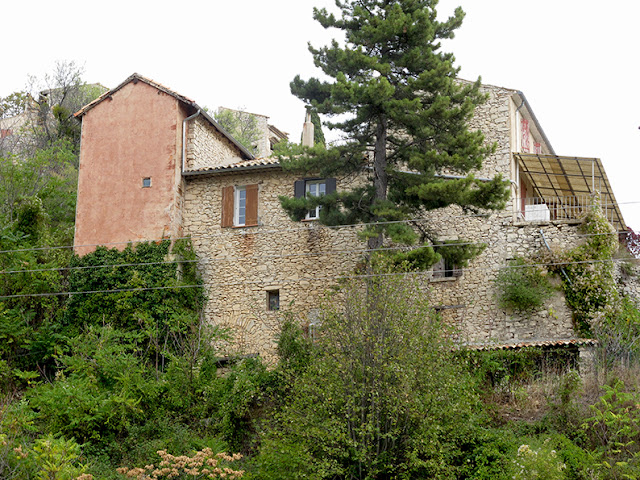 From down below, we could also appreciate fully how much larger the house was than what we initially thought, including two entire floors that hadn't been visible from the road. Definitely enough room for a B&B. I also took a long gander at the filled in arch on the lower left hand corner of the facade. Open that puppy up, put in a pool that runs half-inside the structure, half out with an infinity drop--et voila, B&B de luxe! In winter, the towering pine would whistle woefully while the chimneys billowed fragrant smoke...Maybe there is space enough for a yoga studio?

Yes, we spent a good thirty minutes, at least, entertaining this little fantasy. Not long enough for us to even call the number posted on the door but certainly plenty to restock the wishing well. Sometimes just the wondering is enough.

Sincerely hoping that you all have a wonderful weekend ahead, a calm one with plenty of time to let your imagination go...

...and to get you started hop on board, A "Train of Thought" by Chilly Gonzalez.

And I nearly forgot! What kind of aspiring Frenchy would I be if I didn't mention that this is the weekend when le Beaujolais Nouveau est arrivé! Ah ha! Not being particularly attached to the stuff (nor the headaches it has inspired in the past), I politely declined when my caviste offered a tasting of this year's batch. Without missing a beat, he instead poured a Côte du Rhone Primeur, which is the same concept but made with the more full-bodied varietals that we have in our neck of the woods. It turns out that it has not been a great year for the Beaujolais as many of the vignobles were damaged during heavy hail storms. One winery lost 80% of its production. Happily, there is the rather tasty Primeur as well, which just might leave you dancing like the lovely apsaras... 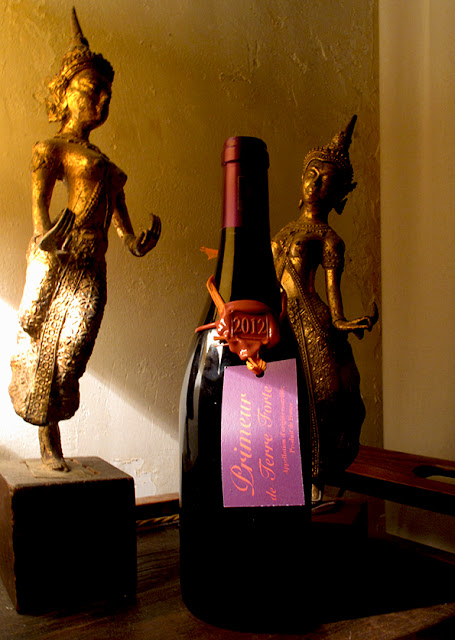