Tastes of the Luberon 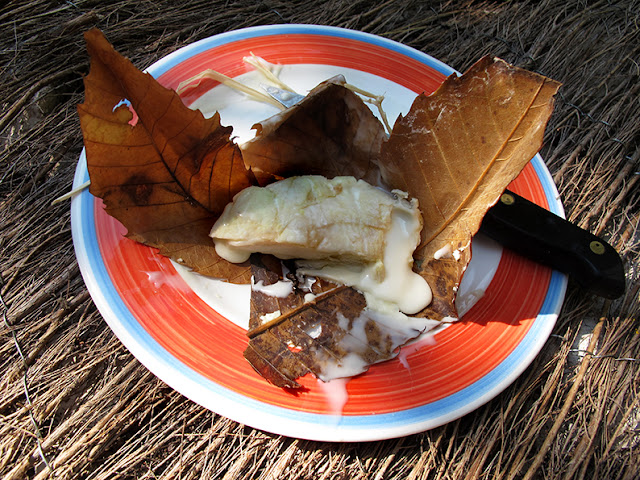 It has been quite a week, hasn't it? I just finished a long, restorative yoga class on My Yoga Online (a  phenomenal resource for expats or anyone that doesn't have easy access to classes) and at the very end, my stomach finally released like a sigh. It had been clenched tightly for days and days. Now that it is nice and relaxed, all the better to tempt it with tasty things, don't you agree? And so here is a lighter, off the cuff post to soothe the nerves. I'll wait while you pour yourself a glass of something good, no rush. 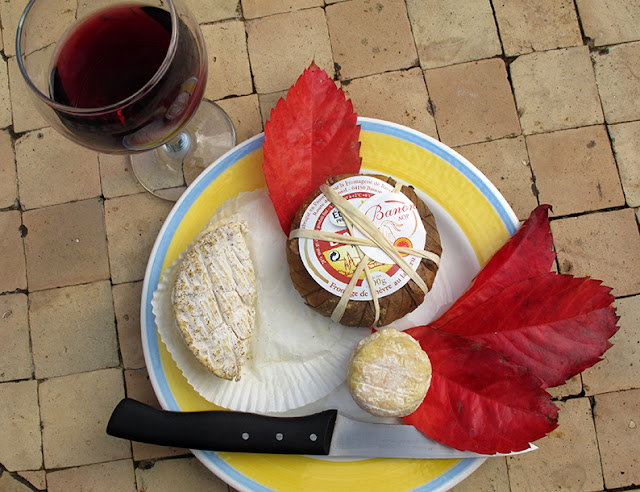 In France, we call someone who loves fine food and wine gourmet. Think of that as being a foodie without the snobby connotations, Slow Food without the politics. Save that I think I have somehow gingerly tiptoed over that fine line into becoming...une gloutonne. Oops.

I will travel far and wide anywhere in the world to taste and savour, the Luberon being no exception. And I will flat out admit it, one of the most important reasons why I so enjoy our cabanon rental is that it is located on a point that is equidistant to all of the edible treasures that the region can offer. Crucially, it is less than a ten minute drive to Banon, namesake of the fragrant goat cheese that is wrapped in the autumn leaves of a chestnut tree and aged just long enough (only around twenty days) until it melts on your plate into pungent perfection. And as the French Wikipedia graciously suggests, it is quite fine with a slice of country bread and a touch of fig jam. 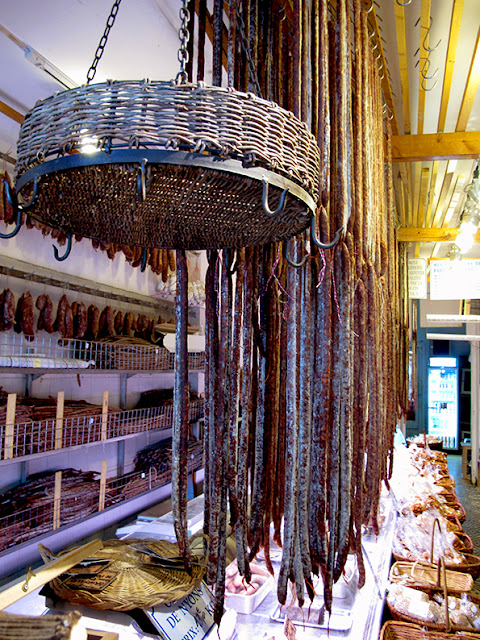 Stepping out of la fromagerie and across a square that is mignon comme tout, is La Brindille Melchio, which while also offering some nice cheeses (including a very good fermier sec that I would recommend), is far more heralded for its yard long saucisson, la brindille. Of course, I was obligated to try several--the sacrifices that I make for you all--and was especially taken with the one that was stuffed with? Yes, you guessed correctly, goat cheese. 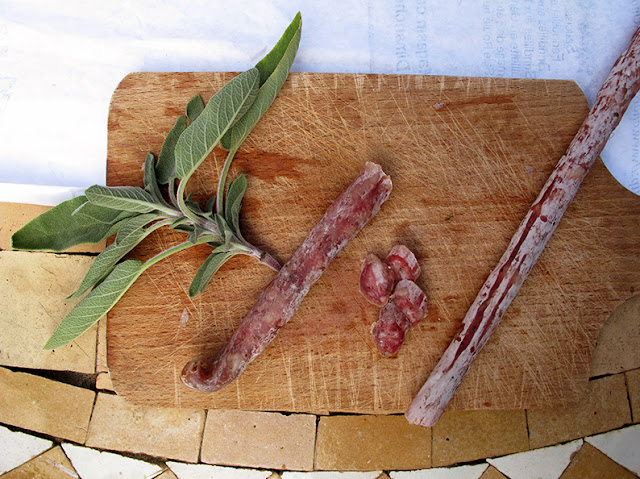 So much hunger mongering was enough to work up a thirst. Fortunately, there are several charming cafés in Banon to offer a little haven of peace, just unfortunately not the one that I chose, as I was surrounded by several young men sporting mirrored sunglasses and fauxhawks crying out over last nights game of le foot as if it were la fin du monde. 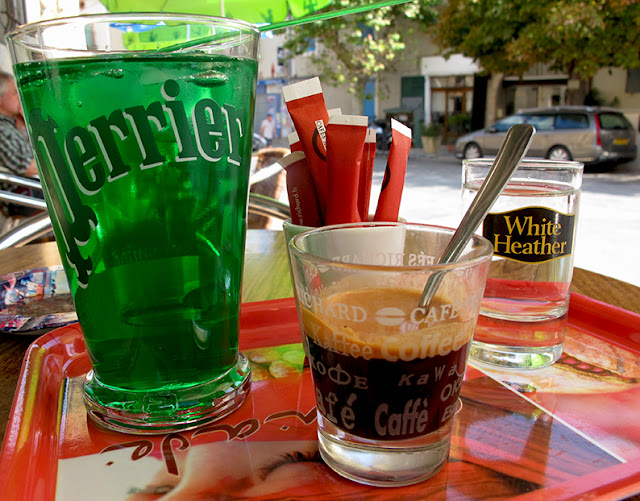 Better then to hop in the Range Rover and toodle up to Sault, for one reason above all--to partake of the magnificent deliciousness on offer at the pricey but worth it boutique of Yves and Virginie. 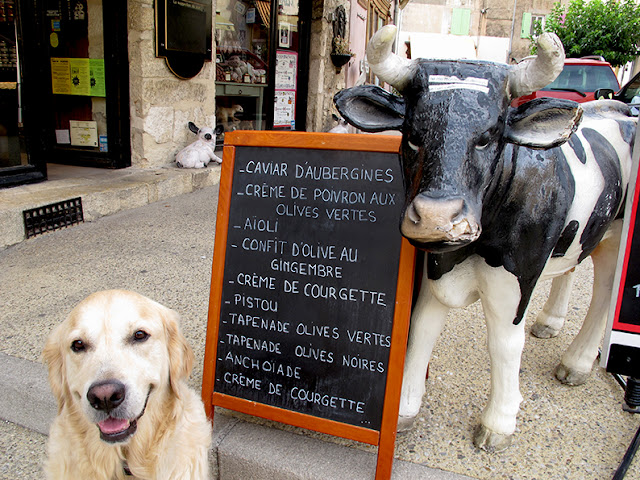 Not only did Ben make a friend, I do believe that he would have been willing to hang out in front of the shop all day long (I am sorry but not even in France do they let dogs inside of epiceries)! Are you trying to decide which of the tasty items on the sign board appeals to you most? I know I was and was disappointed not to have tried the fascinating ginger and olive confit. Two flavours that I adore but do they go together? I have no idea. Will I find out next time? Hopefully. Not to mention that we were a little too early for truffle season... 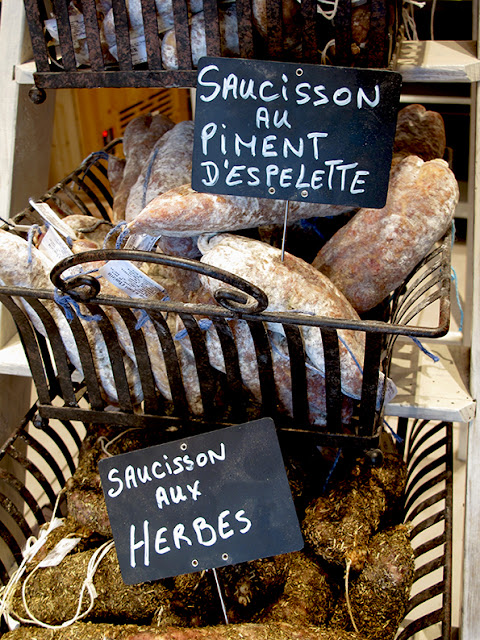 I will say that we were not disappointed in their products and Remi, who was over the moon to find andouillettes that were made the old-fashioned way, even brought several kilos worth back to Arles. Ah, lucky me. And as I have said before, if you don't know that word, by all means, do not look it up... 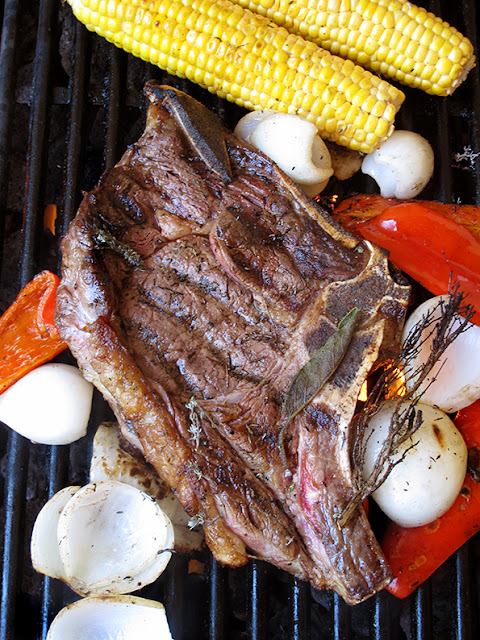 While beef is hardly the speciality of the region, we were so surprised by the low prices at the butcher's that we decided to launch into one of our rare--as in a few times a year--tastings. So, um, since we have already declared that yes, I like to eat, we splurged on a ginormous côte de boeuf worthy of Manhattan's finest chop houses. 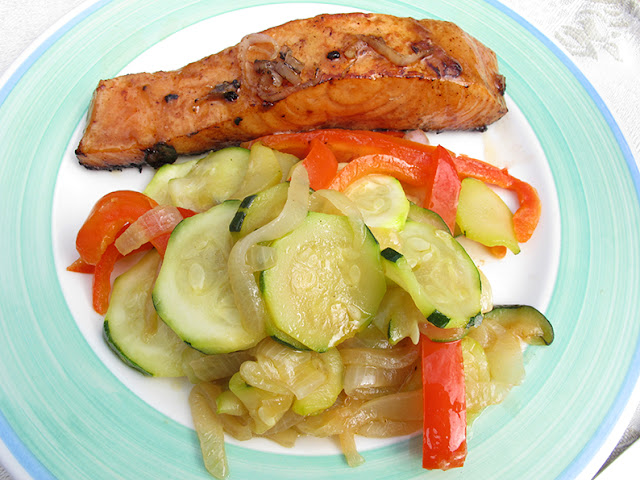 And even less attached to the region but lest you think we are meat-chomping hooligans, Remi also served up a teriyaki Norwegian salmon (this is Europe after all) grilled à la plancha that was out of this world. Trying to assuage our guilt? Our bellies? Perhaps. 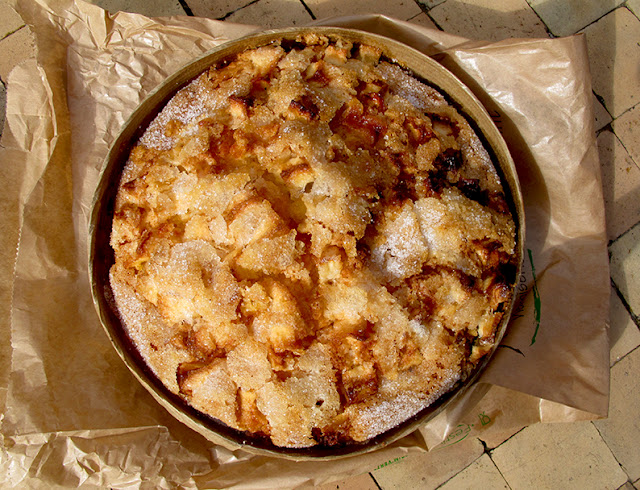 And for dessert? Well, thankfully we are not terribly sucré because really, after all of that cheese, what room remains? But even I couldn't resist this gateau aux pommes that was fresh out of the wood-fired oven at the bakery attached to Le Chapeau Rouge. We also ordered Saturday night pizzas there and thoroughly enjoyed listening to the happy banter of the locals gathered around tables in the middle of the store while we waited for our order to come out of the oven. My choice? La Simiane with Banon goat cheese and insanely good local lavender honey. You see? Glutton! 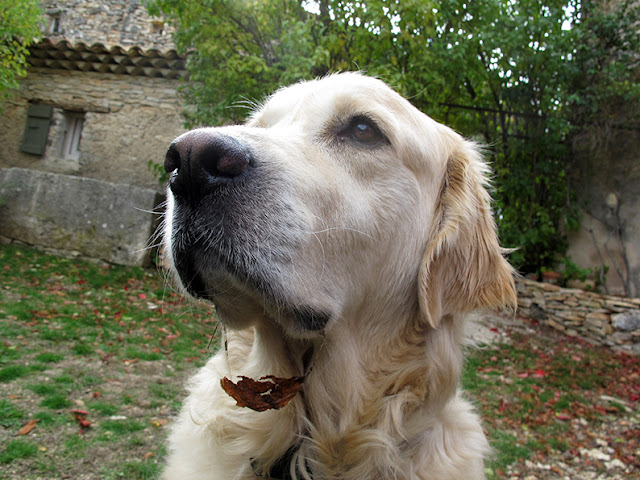 Well, as they say here "tel chien, tel maître"--yes, the dog resembles his owner. So I will leave you with this image of Ben, intent on Remi's plate and drooling so much that he has created a little hammock for the leaves below his chin.