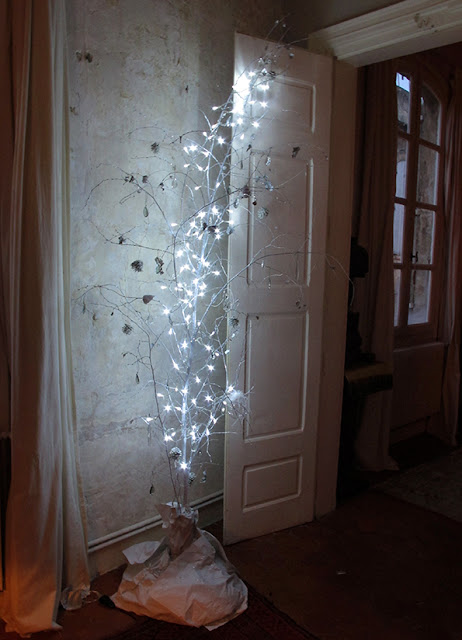 Ooh, the holidays. There is so very, very much that exudes wonderfulness about this time of year and it is a moment to let your creativity spark then shine. But somehow both Remi and I were feeling the itch to do something simpler, more scaled down. Especially for the tree. Remi had been repeating that, "We are talking about a live tree that has grown for years and years, then we cut it down to enjoy it for a few weeks only to throw it into the garbage after. I don't know..." I listened to him even if my initial reaction had been something akin to shock after having growing up in a family where the bigger the tree the better. Last year, we had brought home one that scraped even our very high yee olde ceilings. But while I was in the States, I thought about it. And no matter what, I had to appreciate that he had that initiative. So when I came back, we set about exploring our other options. Well, after I had declared that, "Alright, we can have a fake tree but only if it is a super fake tree...I want a..." "White one," Remi finished my phrase as he has a wont to do. "Exactly."

But now, will someone explain to me why PVC Christmas trees are not only so crazily unfantabulous but also ridiculously expensive? Anything that was even vaguely worth considering was in the 150€ Euro range and folks, we do not have that kind of money to spend on a Christmas tree, most especially as we do not have room to store one for use, year after year, anywhere. We did go take a good looksee though and while in Truffaut, France's largest garden store chain, Remi picked up a branch that was  taller than he is and we joked that it could be an option. It was closing time and he was feeling off with a toothache so we left.

But by the following Wednesday, it was Tree Day. Either I was going to go by myself and pick out a live one from our sweet vendor from years past or not. My Flower Guy had recently reminded me that he only bought trees that were grown responsibly for the purpose, I tried to justify that France is a rare country with a tree surplus but still, I brought up the branch again. We went back to get it that afternoon and yesterday I broke out the Diana Krall Christmas album and went to town. 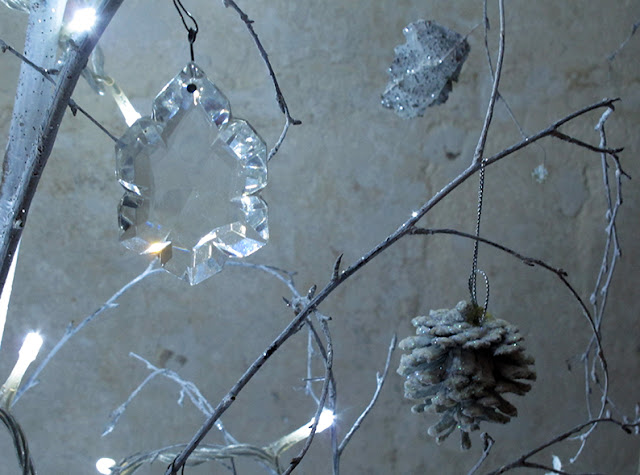 ...plus the one ornament that Remi had chosen, akin to a baby bird or an aspiring Muppet. 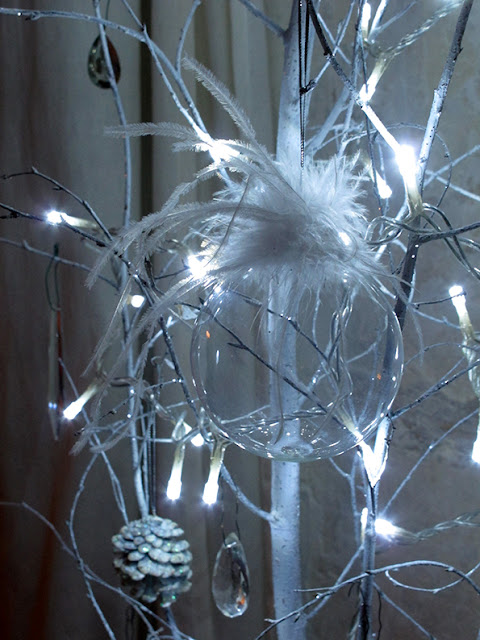 The result is utterly féerique or fairy-like but even with multiple tries, I admit defeat in photographing it. Sigh. Some things don't share well. 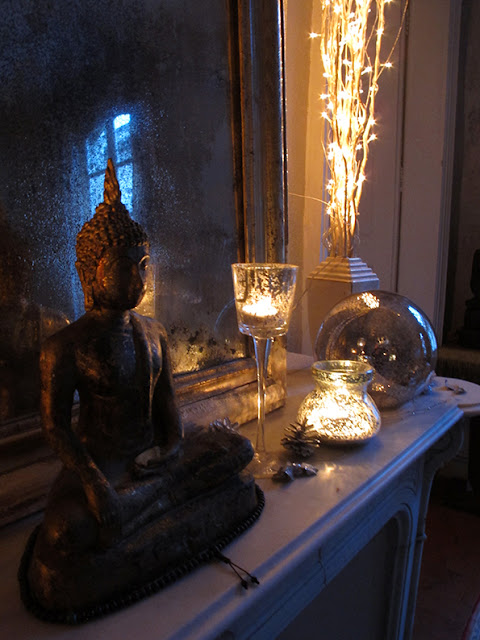 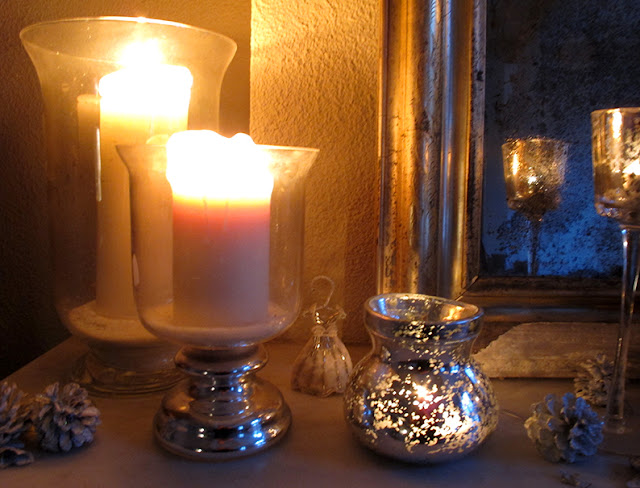 Tired of not having a real fire, we put a little thought into our candle-lit fireplaces. I had a little click with a memory of the beautiful Sheesh-Mahals in the palaces of Rajasthan so Remi put down some glimmering tile. It is a work in progress... 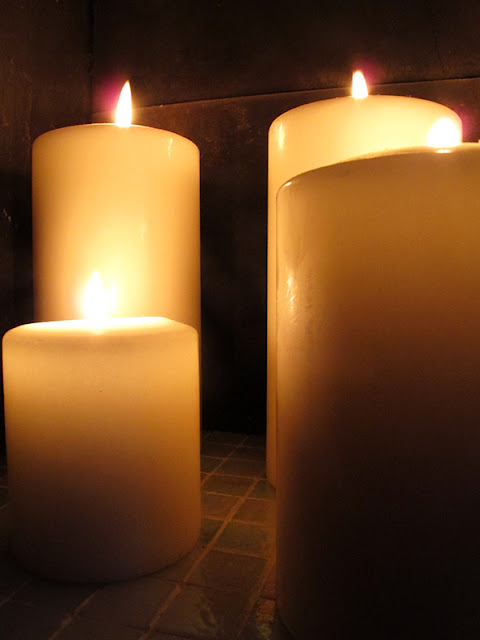 Just a few pine cones on the lustre... 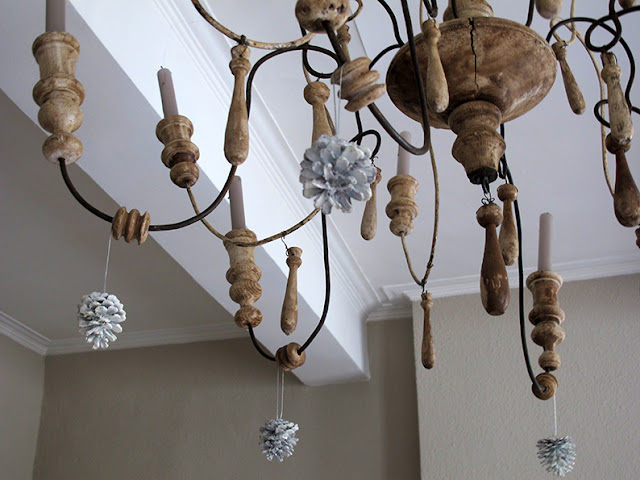 ...plus branches around Marie in the hall and a tiny angel in the alcove. 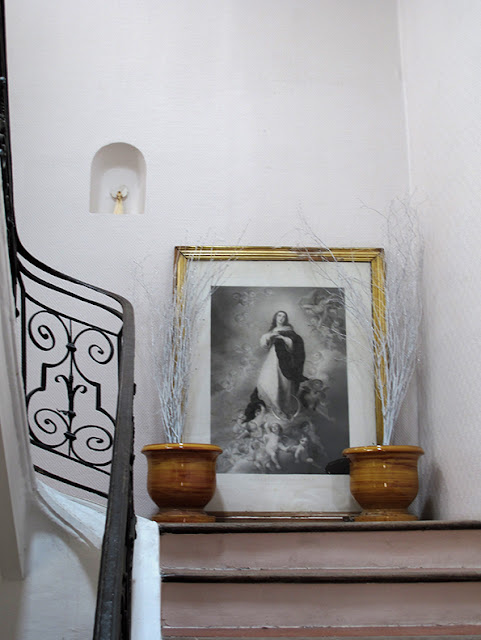 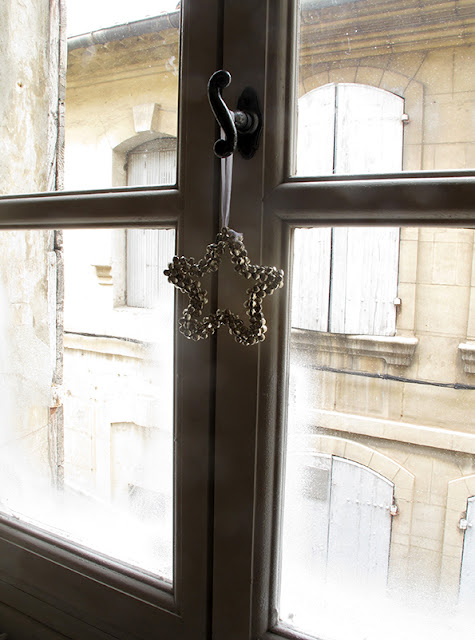 For the first time ever, I have succumbed to the kitsch of spray snow on the windows! Bah, it made me happy. What I wouldn't give for the real thing... 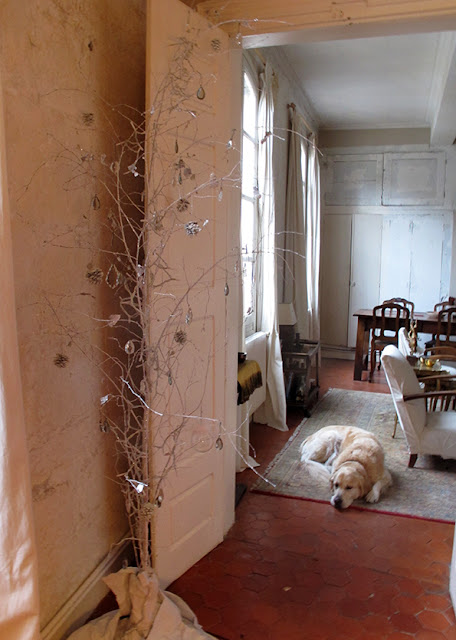 And so with our little branch and our wee doodads, we have piffed and poofed up our bit of Christmas happiness for this year. And it has done its magic. As my friend Nancy Kate so charmingly has reminded me in her post at Bread is Pain, it is all about creating then spreading the joy.

Have a wonderful weekend everyone!! Try to make sure that you enjoy this season and don't let it enjoy you!

Just after I hit publish, I read of the terrible shooting in Connecticut. I am horrified and will be sending prayers for peace and strength for this horrific act and that in Portland.