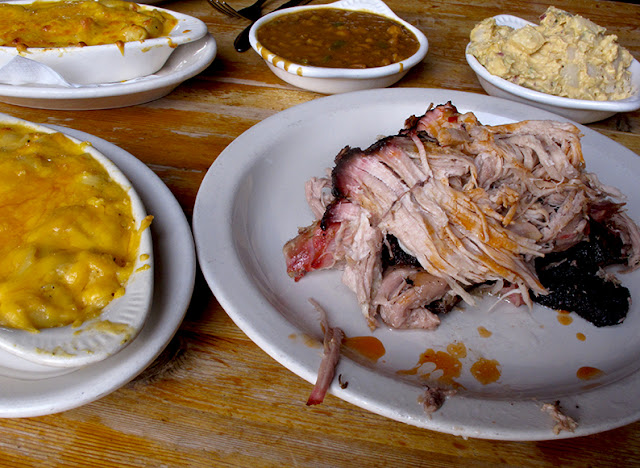 I think nearly any American expat living in France would offer up the same response when asked the question, "What food do you miss the most from home?" The answer would be: Mexican. Or more specifically, Real Mexican Food as yes, Old El Paso can be bought even at my local grocery store in Arles and that isn't even food let alone authentic. My Mom knows this and so whipped up her crispy quesadillas with tomatillo salsa within an hour or so of my arrival in the States. For that, not to mention the glass of wine that was immediately placed in my hand, I thank her. I am also grateful for her truly infallible food radar, one that the military would covet if only they could figure out how to transform it into say, a heat-seeking missile. 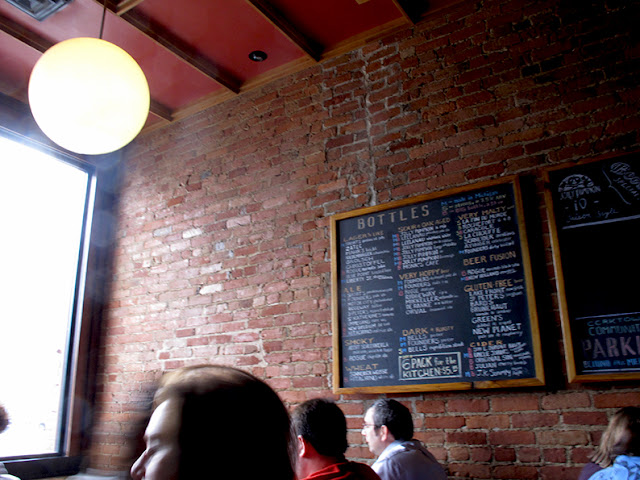 So when she kept suggesting that we take a road trip down to Detroit (not even 45 minutes from Ann Arbor) for BBQ, I listened. In the realm of expatatia, great BBQ is beyond what one can even hope for and so is often left off the list. And yet somehow before we knew it, my trip was almost over. But my Mom is a wily one and nothing will stop her from good food even if she has to take a personal day off from work to get it (shhh). This is after all, the woman who said that I had a dentist appointment one day when I was in high school so that I could attend a traditional Indonesian luncheon at India Joze in Santa Cruz, California (rightfully feeling that I would learn more from the experience that I would that day in school). So soon, off we went, barrelling down the highway with her companion, Leonard in his big Lincoln that we affectionately call "the Boat." 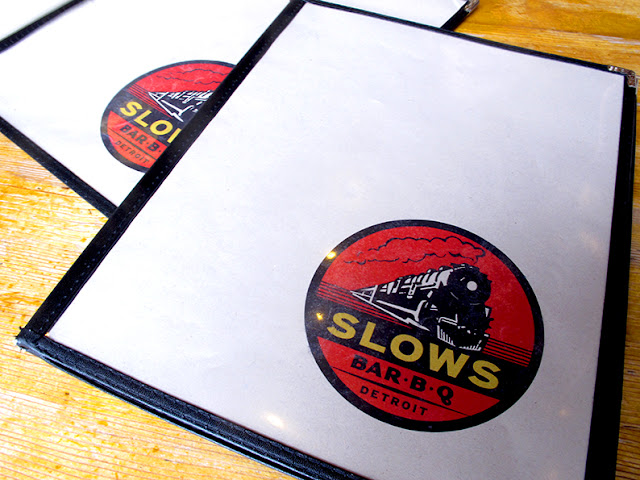 Later, when folks would hear that we went to Slows Bar B Q, they would immediately ask, "How long  was your wait?" Turns out, Slows is famous. But it also just so happened that luck was on our side. Even though it was already past 1:30pm when we heaved open the heavy front door, we were initially told by the hostess (who is heading to Paris next April) that it would be 45 minutes but to come back for our beeper (ah, only in America!) in fifteen. Back in ten as it was too cold to wander, we were seated straight away. 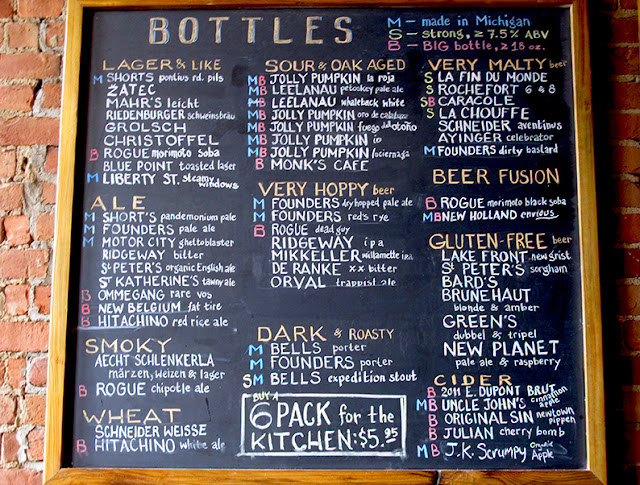 It says a lot about "the what" we were about to dive into that the beer menu in the bar area suggested to "Buy a six pack for the kitchen" for $5.95. Well, they do have to smoke and roast all of the meats on the menu for hours--hence the name Slows--I suppose they could use a little encouragement from time to time. That there were four different types of sauce, including the vinegary North Carolina style (David Terry, are you listening?) on the table also had me curious. 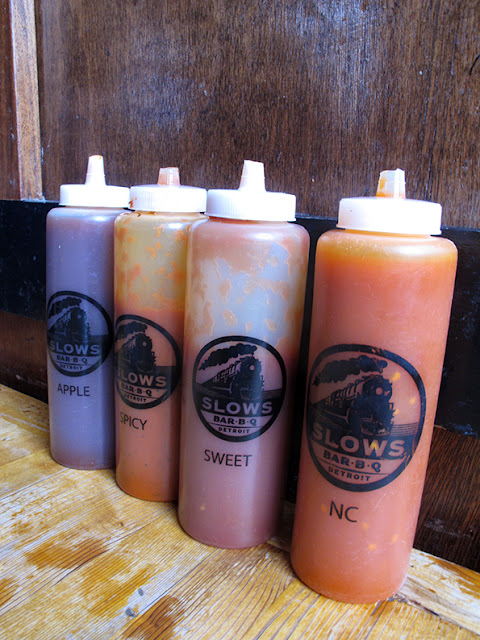 Need I mention the...perfume...of what was so clearly the real deal that permeated the room? I leaned my head back and murmured a drawn out "Baar--beee-quuuue"... 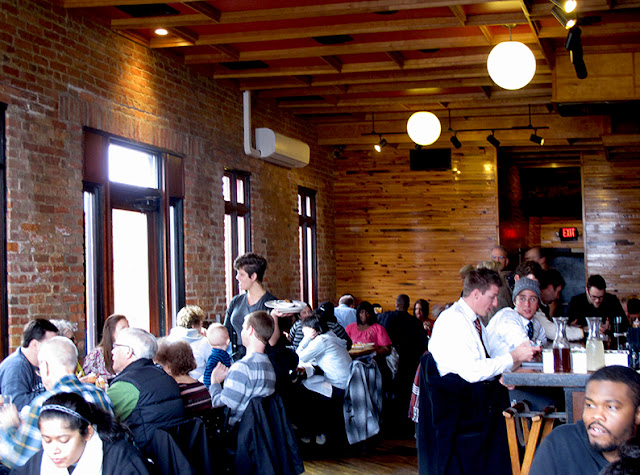 We noticed the mix of customers from business men with their ties flung over their shoulders to big tables of families to sociable students, all united by one factor: they all looked supremely content. The conviviality was encouraged by the staff, our waiter was a charmer and steered us where we needed to go on the menu. 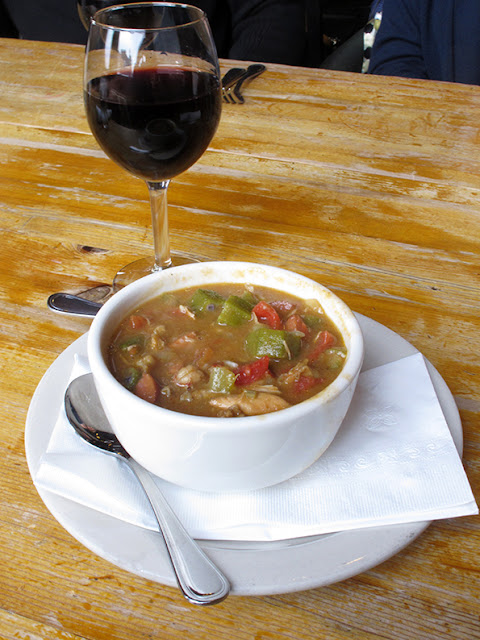 A $7 glass of excellent Crozes-Hermitage to start? No wonder these folks were serious about putting the Bar back into BBQ. Don't mind if I do. The most fulfilling, smokiest gumbo that I have ever had outside of New Orleans? Ditto. 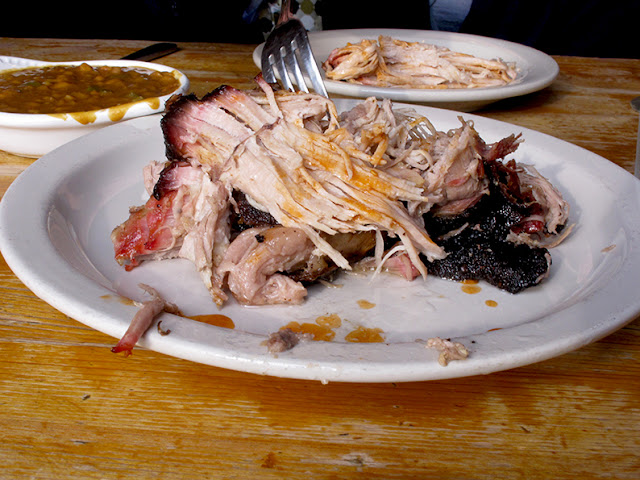 Not being fools, my Mom and I decided to share an order of the Carolina Style Pulled Pork (at only $12.95 the buy of the century) rather than attempting plates of our own, most especially as it came with two quite copious sides. We choose a bowl of earthy baked beans spiked with jalapenos and coriander... ...and of course, of course, the gooiest, creamiest Mac-n-cheese, the one that I will be longing for almost as much as that pork...roasted with the bone left in, falling apart, perfectly pulled, lightly sauced and tender as can be. You know how we wanna be Frenchies love our sucré-salé and the spice rub used fit the bill perfectly. 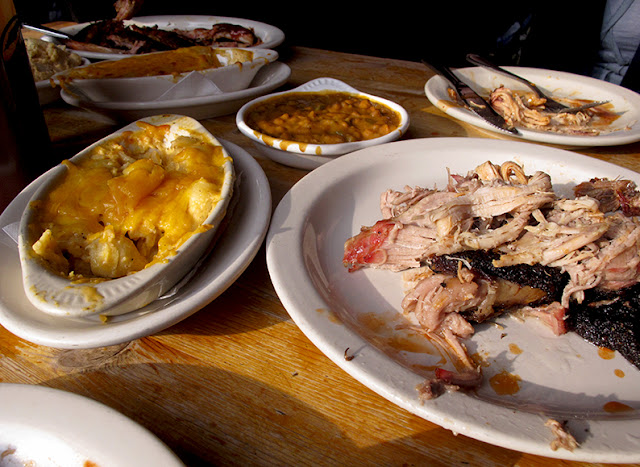 We did our best. 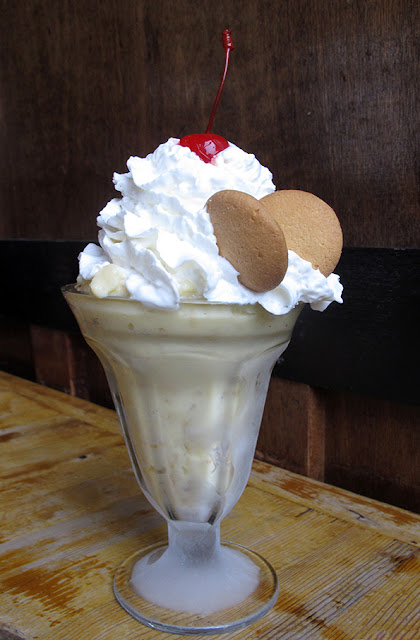 And although we are not fools, we are indeed gluttons. The proof is in the (banana) pudding that my Mom finally caved it to ordering "just to have a little nibble of something sweet, you know." I do, Mom, I do. Did I need that second glass of Crozes to finish it off with? Perhaps not but I was on vacation after all... 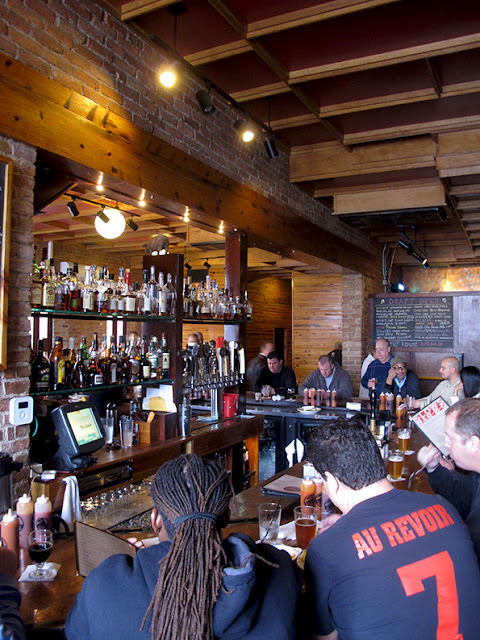 I raise that now imaginary glass to Slows. When we ambled out into the big city of Detroit (more of that to follow soon), we all were surprised by the happiness, just that, happiness that we felt. A wonderful hour or two, catching the contagious good times of what is now my favorite BBQ joint in the nation. I am already mentally planning what I will order when next I go back. For certainly, this is not goodbye but simply au revoir...