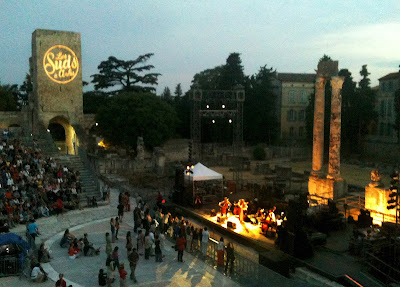 As the temperatures and crowds rise like a slow-motion wave, I can feel my patience wane. It is High Season in Arles. And yet, despite herding my two puppers between slack-jawed families that spread across our narrow streets Western-style and gingerly stepping over dropped strawberry ice-cream cones, there is a balm that goes right to my soul. Music.

This year marks the 18th edition of Les Suds à Arles, one of Europe's most important world music festivals. And when I say world, it is as in scan the globe--from Senegalese rappers to a Balkan "rock star," a singer from the Mongolian Steppes with a four-octave range--not to mention a group of wacky Mad Maxian horn-blowers that Remi tried to drag me to hear in the mosquito-filled Camargue. Um, no thank you, sweetheart.

For I had another style in mind entirely--the unique voice of Melody Gardot. Like smoke without scent, she is a conjuror. Those of you have been reading Lost in Arles for some time might remember hearing her work on various posts for she is one of my favorite contemporary artists. We had missed the opportunity to see her perform in Sête (an incredible open amphitheater overlooking the sea) two years ago and so pounced gleefully when this concert was announced months ago. It has been something that I have been looking forward to for ages, a Christmas present in advance. And yet a few hours before the concert, storm clouds hovered and a few warm splashes of rain evaporated into the concrete. Would my expectations be dashed?

No, no, the skies were kind and the music...divine. 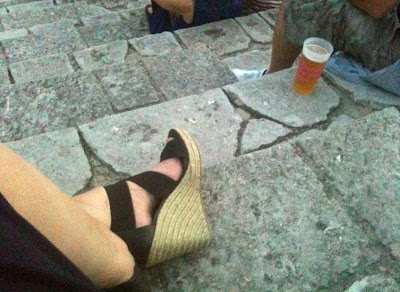 We climbed to our traditional post in the very last row of the 2,000 seat Roman amphitheater (finished in roughly 12AD) and settled. Despite my knowledge of the rickety ascent, I always seem to wear something utterly inappropriate for the task. It has become my own little inside joke.

A happy hush descended on the spectators as Silvia Perez Cruz, the opening act, took to the stage. Immediately, we all knew that we were hearing someone with an immensely expansive yet poetic talent. She has already conquered her home country of Spain with a seamless mix of Latin music--from habaneras to fado, folk and Cuban--and she is most certainly une vrai découverte. 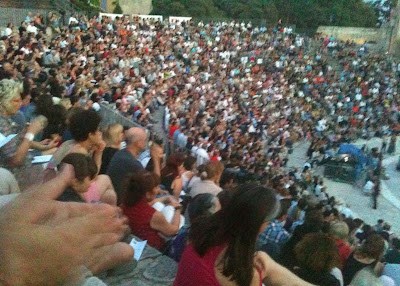 She lead the audience to relax easily into the evening.

I love listening to the chatter of the entr'acte. Swifts raced through the darkening skies while children danced in the open orchestra--quite a change from when that marble floor had been preserved solely for the nobles with their moveable chairs during Roman times. 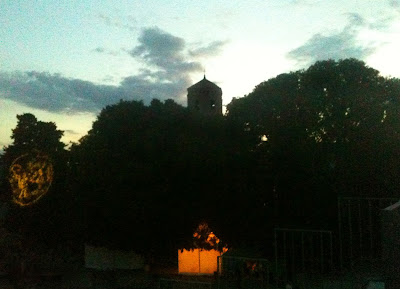 From our faraway little corner, we spied the glow of the Artist's tent, directly under the tower of the St. Trophime Cathedral. As the lights dipped again and the musicians took their places, I was surprised to see a delicate figure being carried across the uneven terrain in the dark to the stairs leading to the stage. And then I remembered Melody Gardot's terrible accident in which, after being run over by a driver who had sped through a red-light, she was forced to go through many operations and a year of lying on her back in a hospital. There, she taught herself to play guitar (yes, on her back) and started composing music as a form of therapy. Despite her recovery, her perception of light and sound has been permanently effected, forcing her to wear dark glasses and to create music that started as a whisper then a hum.

How far she has come. Listen.

I know that being moved by her story is part of what initially drew me to her music. But while I still have enormous admiration for her determination to become such a fine artist (and someone who continues to be authentic in her life choices, which is important to me too), I can reassure you that there is zero thought on her past when she performs, rather she explodes in the present. The French word envoûtant best describes her presence and that voice, that voice that charms while singing or bantering in franglais.

Such a beautiful evening with more than a little hint of magic. 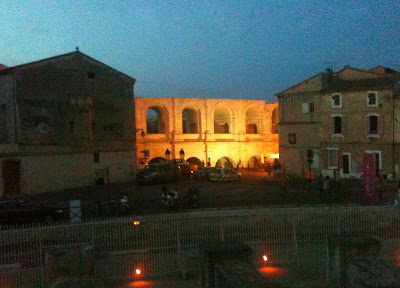 In one of her final songs before the encores she promised in a refrain, "I'm gonna go but I'll be back someday."

I hope so, Mademoiselle Gardot...

I'll leave you with "Baby, I'm a fool," a song that she introduced by saying that it was "a good song to sing while in the bathtub"...Lovely, non?

Enjoy...
And I do apologize for the photo quality on this post but I really just wanted to enjoy and so alas, relied on the iphone, rather than be caught up in anything other than just the joy of being right there, right then!

Oh! PS. I nearly forgot to mention that I did a guest post for the lovely food and travel writer Ann Mah for her Tuesday Dinner series that appeared yesterday. If you feel so inclined, you may find it by clicking the link: Here.