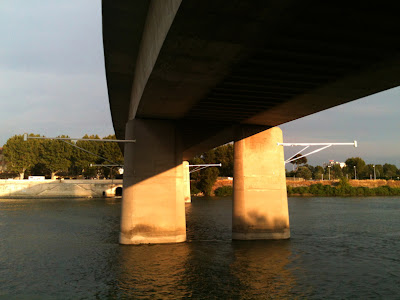 Remi got the call. It was time to go. Il avait une photo à faire sous l'autoroute mais sur la Rhone. It doesn't matter that it is Friday night in a professional photographer's world. And so we loaded up the equipment and went. Me to lend a hand as I do from time to time. Albeit a tad unwillingly as I was in the midst of typing something else but I let it go and go.

Under the bridge that is an overpass, on the banks of the "other" side of the Rhone, there is a camp of gitanes this summer. They are different from the other Roma also living outside of town but linked in having a life tightly woven together and yet set distinctly apart. We pulled up fast as Remi was catching at a particular moment and then stayed as it was missed.

I saw so much.

Burnt cotton candy twisted hair topping a smudge-faced girl in a pink jumper. She draped herself belly-down along the guardrail to watch us with bored eyes. Dogs being forced out of puppydom by a band of chasing boys. A four year old wandering pantless amongst the weeds. Lanky men with their arms folded behind their backs, walking slowly over to the Rhone to let their gaze follow the drift. A movement that was repeated like the pull of a clock. Camper doors slammed repeatedly to follow a verbal point then silence. And then guttural voices rise again. Then fall. A shiny black Labrador strained at the end of his leash, paws in the air, barking at all who crossed a line known only to him. A platinum Amy Winehouse haired teenager with eyeliner to match drifts over with her little brother in tow to look over our shoulder. She has a furry blanket wrapped around her, she nods so he will ask us, "What are you doing?" They make sullen flip flop slaps as they go but a matriarch made of leather glides silently up behind us to offer a religious medal, something we know to refuse but in doing so with kindness, we are welcome. Across the Rhone, the children's friends are called out to with corny jokes as their family bathes in what I had thought was les egouts, the sewers but Remi assures me is the runoff from an underground canal. They knew that and are camping out at the coolest spot in all of Arles. So many degrees below what we feel just ten minutes walk away. And because we are directly under the overpass, we don't hear the cars at all. Something I can't say in the least for our apartment, which at times, feels like we are being assaulted by sound that is not our own. Two young but not so young girls come back with a sac from the mini-market, baguettes poking out the top. Dinner is made and ate on a table leaned against the massive concrete pillars, quietly with just the tindrom of cutlery. No parents involved.

The light is its light in Arles, proud macho town. So we all watched it. Our Friday night. As we left a woman that we had not seen raised her hand in a silent aurevoir. 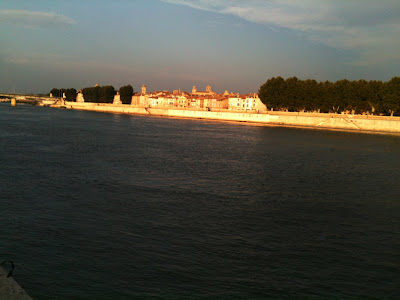