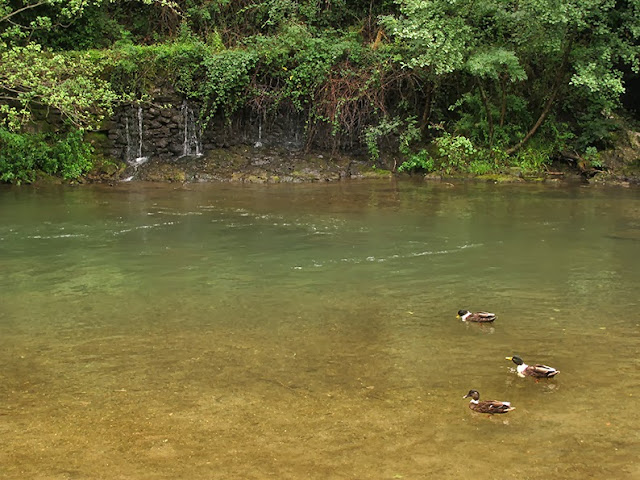 The rain cleared and the sun peeked out a bit, daring a little hop-scotch on the tops of the morning dew. We followed its lead and winded our way down from the confines of the safari tent into the village of Avène, home to healing waters of fine thermal baths as well one small épicerie where we could buy a much-needed baguette. 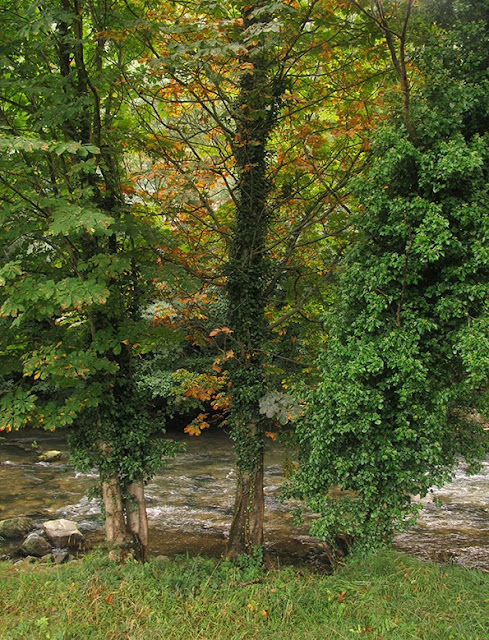 As I did the shopping, Remi walked the dogs in a gorgeous park crossed by a river so clear, you could read by its light. Orange leaves fluttered flamboyantly amidst their greener counterparts, such a happy sign for someone that loves autumn as I do. 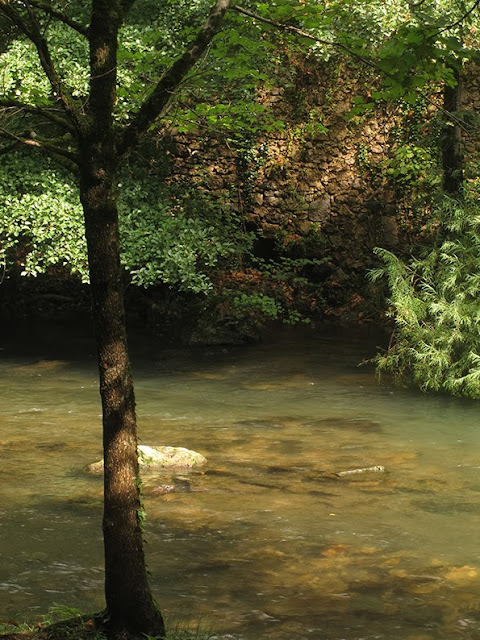 The light, freed from cloud's clutches, ran like the river. 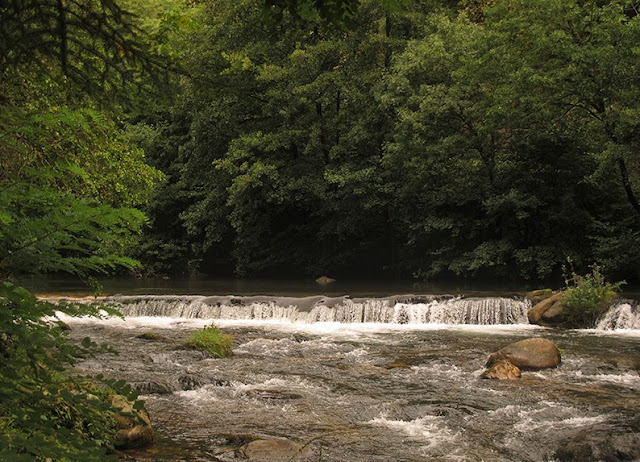 Remi called out with a wave in my direction, half-buried from view as the riverbank descended, dipping down after a swift slip of waterfall. 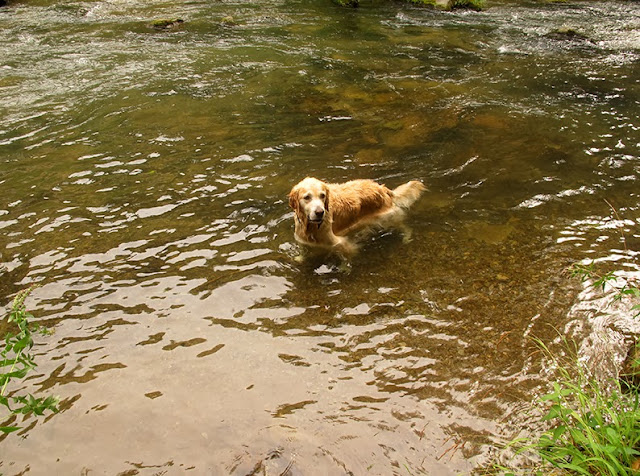 As I caught up with him, he sighed with mock-exasperation. "Kipling leapt in and tried to go after some ducks!" And yet neither of us could feign surprise. For despite our best efforts to teach him city manners, Kip, who we adopted seven months ago, has retained his wild character and it expands in the country, puffs up right to the tip of his tail pointing up over his head. Ben, on the other hand...our sweet Ben. He had waited for me and was looking, expectantly... "Ok, go on Ben, go!" With a delicate splash he dove in, did a turn or two for kicks but mainly let the cool water run through his fur. 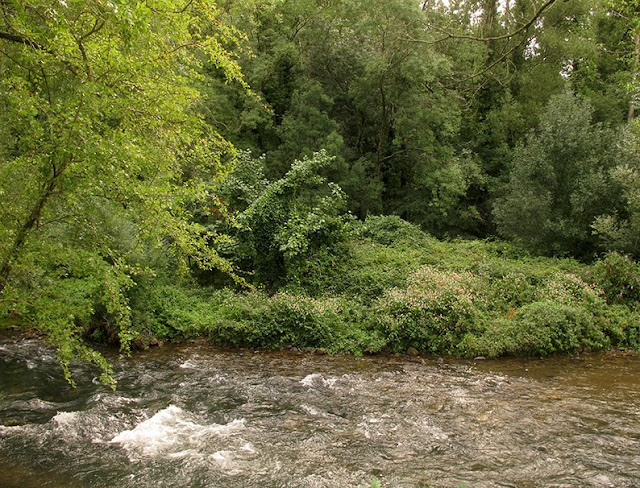 After an appropriate amount of bathing time, we whistled and walked on quietly, listening to the burble of little symphonies... 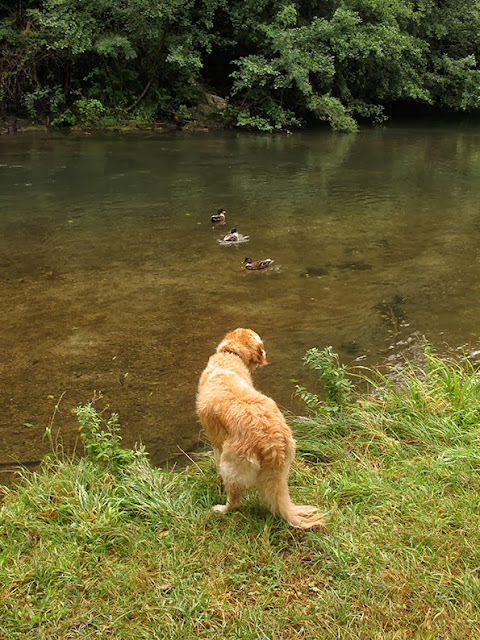 ...until we came to the ducks again.

Now, it isn't always easy when you bring a new dog into the household, especially one where the puppers spend as much time with their owners as ours do. We have had Ben since he was a wee thing and at times, I could swear he believes that he is half human. As my friend Sonny says, "Ben has soul." And he does. Not to mention he loves everyone. Thank goodness, for a lesser dog would have struggled with the arrival of a bossy barker like Kipling, no matter how much we have bent over backwards to give him as much love (if not more!) as he has always had.

Both dogs get along (thankfully) but pretty early on into the game I saw Ben figure out that he needed to have one area where he was clearly the boss, where it was his thing. And that thing was swimming. He had the light bulb moment one day at the beach as he watched Kipling's fear of the waves. So, as we had been walking, Ben's little pupper mind had been turning. When we came across the ducks a second time, he knew that his moment had come. There was no way was he going to let that young upstart Kipling be the only one! He stopped, tensed up, looked back at us a little nervously and then dove in. He paddled, paddled right towards the ducks... 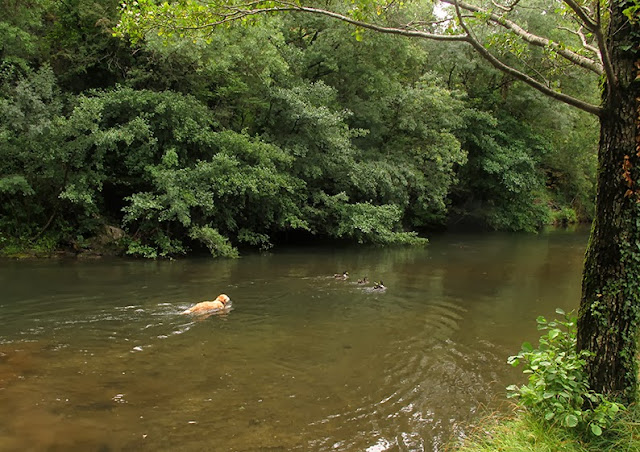 ...and then paddled, paddled quickly back as soon as the quacking had become too ferocious! 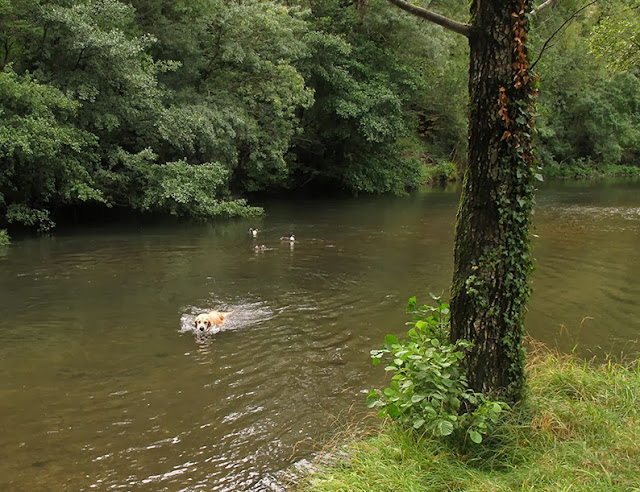 My Ben. I knew, with all of my heart, that he was incapable of hurting them. I think he was just going out to say, "Hi." 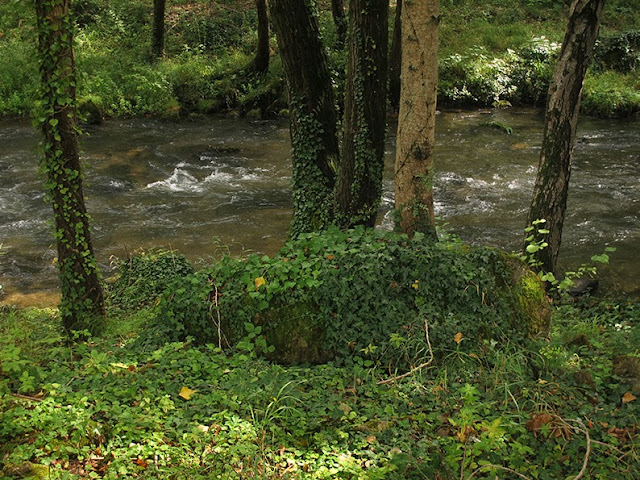 He looked a tad sheepish as he pulled himself out of the river and shook himself dry. That silly Golden grin. We encouraged him though, saying, "Yay Ben! Bravo! You showed those ducks who was boss!" 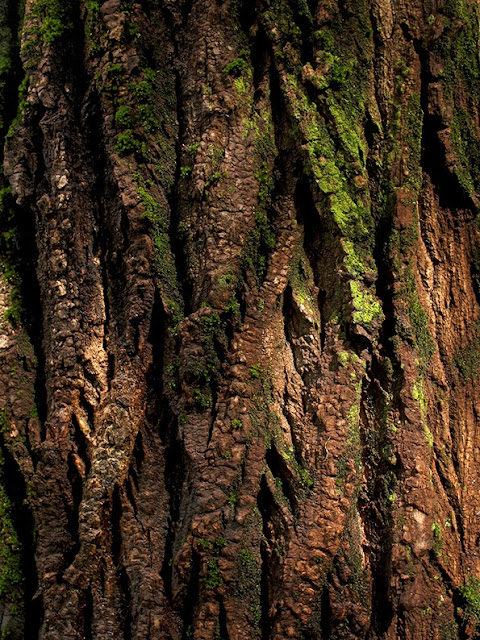 He trotted on down the trail proud as could be, sure of his place in the world and in our hearts... 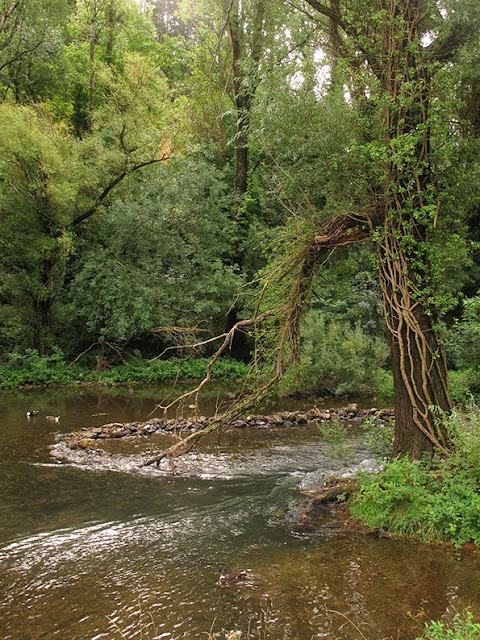 We left the ducks in peace and continued on, our little family intact and theirs too...