"It's In His Kiss" by Vickie Lester 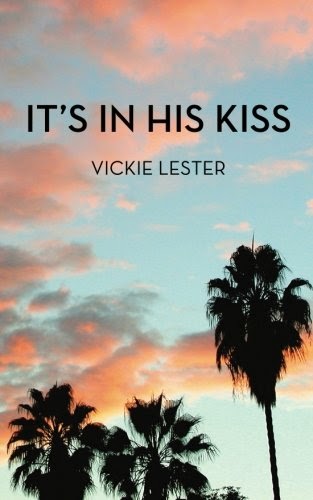 Folks, prepare for me to gush.

While it may not show much in my current daily life, I have a deep and long-standing admiration for glamour, most especially of the Old Hollywood kind. No, not the tinsel and flash but the Goods, the kind that causes a frisson or two. Now, I have a charming friend who feels the way that I do and as we are talking about writers and writing this week, it is the perfect moment to tell you about Vickie Lester's (yes, that would be a nom de plume) fantastic new novel, "It's In His Kiss."


You might remember my dedicating a post to Vickie this past February as a cheer up effort for her birthday, one that fell just as her team of publishers dissolved while her novel was on the brink of publication. Can you imagine? It is amazing to think that in so short a time, she bravely took up the fallen reins and rode into the world of self-publishing with her friends and the many fans of her blog, Beguiling Hollywood, cheering her on to the finish. Et voila, she did it and ahead of schedule to boot. It's a good thing too as this is one fantastic ride of a read. I am snobby enough when it comes to using certain adjectives where literature is concerned but honestly? "Fun" is the appropriate word here. Vickie told me, "I loved writing it and I loved editing it." It shows.


Here is what I had written previously: "Each chapter that I have read had my heart racing, leaving me hungry for the next. For you see, Ms. Lester is not only a brilliant writer but the real deal who writes about Hollywood, it's wonders and foibles, from the deep insider point of view. And some of the scandalous tidbits? Well, they very well might be a slightly disguised truth, which we all know is stranger than fiction."


My oh my, someone was being prescient that day. I had no idea what I was in for when the novel arrived and I could finally read all of it. I am warning you now (and I see by a review at Amazon that I am not the only one), as cliché as it sounds you. will. not. be. able. to. put. it. down. Until you are neatly dropped down on the other side, breathless and blinking.


I understand more clearly "Ms. Lester's" use of a fake name after having tasted each morsel of this dark but deeply romantic mystery, as some of the details are frankly too fantastic not to be true. And those of us who read her blog understand complicitly that this is a woman who knows of what she speaks from the source. Not to mention her skewering a certain "Clientology"? Scandalous. While I am no gossip in life, a little fictional swimming in that steamy pond never hurt anyone and half of the fun in reading the novel lies in discerning the "who is who" of the character's real life counterparts. And the other half? In trying - and failing - to see where the story is going to take you next.


Hollywood. Glamour. Power. Lies. Destruction. Rebirth. It's all in here...it's all "In His Kiss."

Isn't it amazing when our friends do great things?
Makes me happy and very proud.
Have a great weekend everyone and thank you for all of your kind responses on my previous post too...
Posted by Heather Robinson at Friday, May 16, 2014