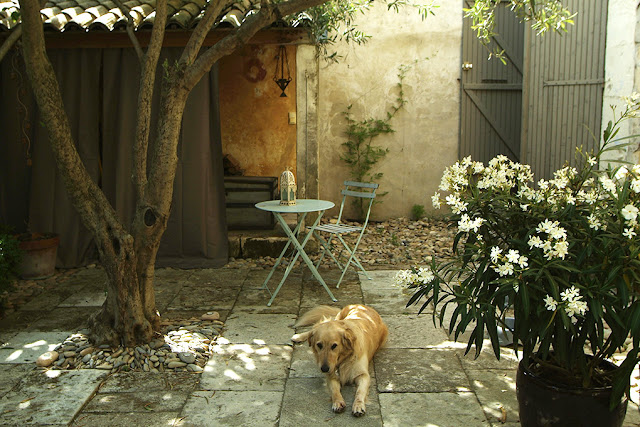 Would you like proof of how brain-addled I am due to this heatwave or canicule? A little while ago while getting ready to take the puppers out for their brief evening walk, I grabbed a bit of sun cream to put on - one can never be too careful (especially as a blue-eyed redhead - second only after albinos in terms of tendency towards skin cancer). Well, it was only after I had rubbed a big swath all across my cheek that I thought, "The texture feels weird" then, "Wait, this smells minty!" Yes, my friends, I was anointing myself with toothpaste. Organic toothpaste albeit but nonetheless...

So, perhaps it is best to down-shift my expectations this evening and keep it rather simple on the blog with not too many words involved lest I need to string them together and be held accountable for it. But there are a few things around the house that I wanted to share, so why not just make it a more decor-oriented week, at Lost in Arles - pas de problème, non?

While it is slightly mind-boggling (and we have already made it clear that my mind is indeed boggled) to think that we moved into this house in the country nearly a year ago, there are still plenty of things to be done and tweaked. After waiting to the point where we both became deranged by seeing too much of the necessary junk packed in next to the firewood and trunk o'tools under the pavilion, I put up a pair of cream curtains, only to find that it looked like they were sheets and we were about to put on a puppet show. Fortunately, it is les soldes and so I was able to score a pair and a half (the half will rest below the courtyard's stone sink) in just the right shape of taupe for only 6 Euros each. Look past the cutie and you will see them in the photo above. Visual obstructions obscured! 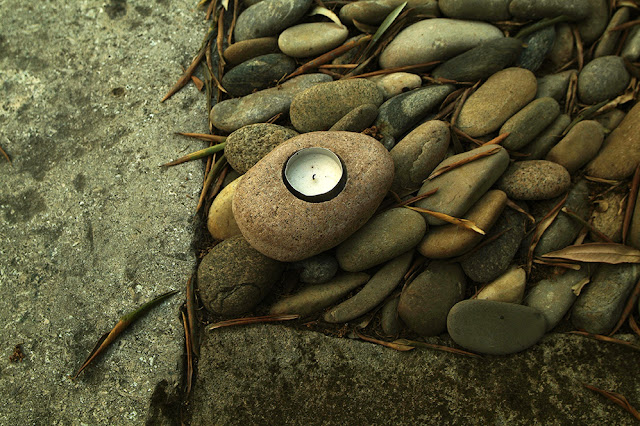 Remi, for his part, found these smart tea-light holders at Casa (for my French friends here - it is where you go to get all your candles too, right?) for only 1.50 each. His is going to redo his rock arrangement at the base of the olive tree so that they fit right in and already, they look just lovely in the night. 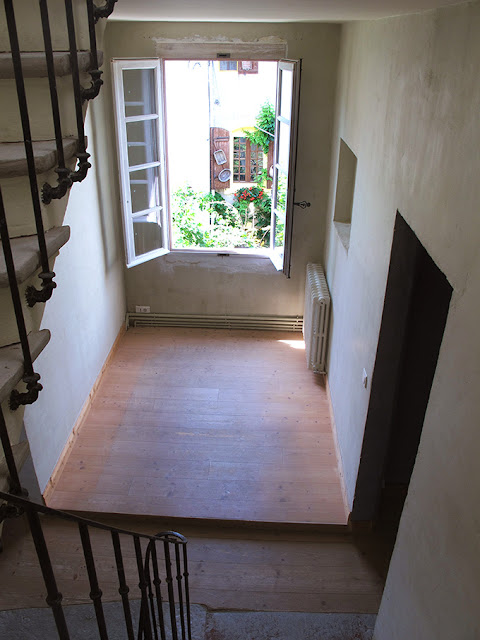 But what about rethinking/the tinkering? As we were crazily restrictive when we first moved in about what "art" we would put up on the walls, there have been things that I have found myself missing. Namely, our antique batiks from Bali. This is what our first floor landing looked like when we first moved in. It has been home to a kind Buddha that we brought back from Phnom Penh since then but walking by one afternoon, I saw a nail in the wall at just the right height and thought to give a batik a try. 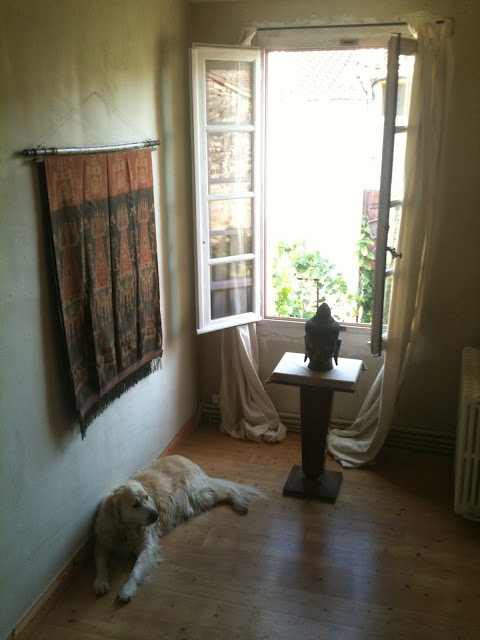 My first attempt, the oldest of our little collection, smelled still of its earthy vegetable dyes when I took it out of its wrapping. And yet, despite the helpful presence of a handsome doggy, it was too heavy, too  overwhelming. 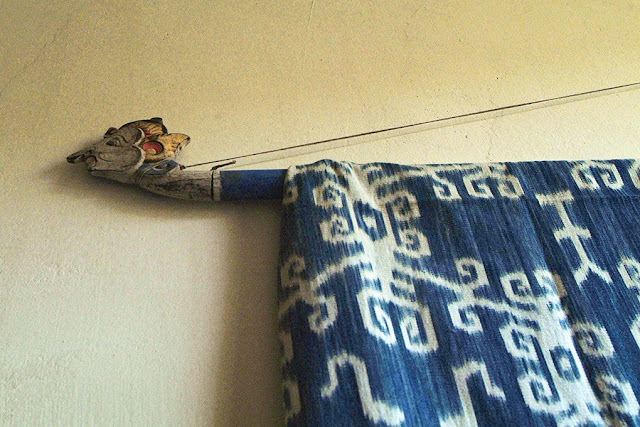 I thought of another of the batik holders, a mischievous one - whose sculpted faces were still swathed in bubble-wrapped from the move (my doing) which lead me to set them free... 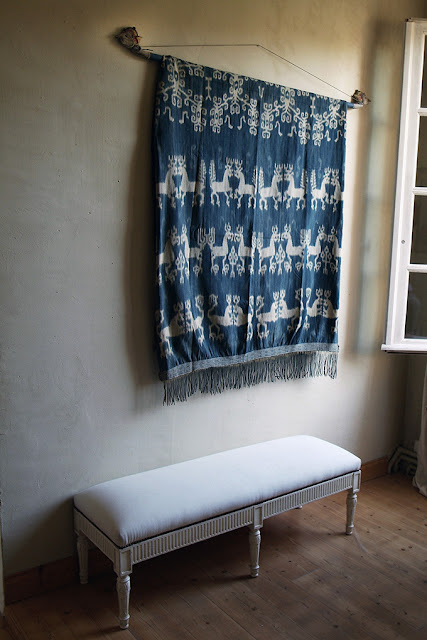 ...and try the magical blue prancing stag batik. I dragged the bench at the end of the bed in order to put it up and thought, "Well that looks rather nice there. I have always wanted a tiny place to perch." 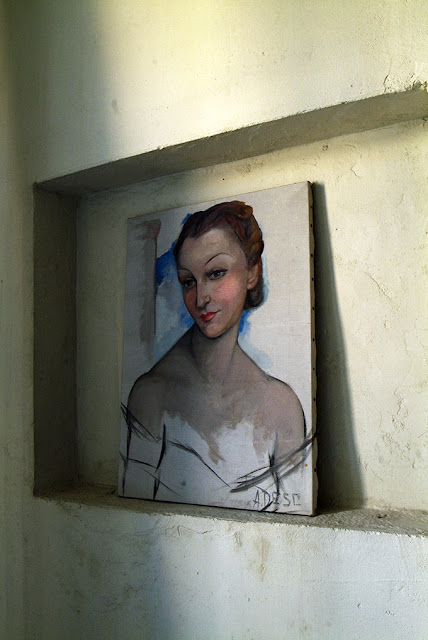 Plus, the tones worked nicely with our 1940's unfinished portrait - one who has always reminded me of my Mom and so is one of my favorites. 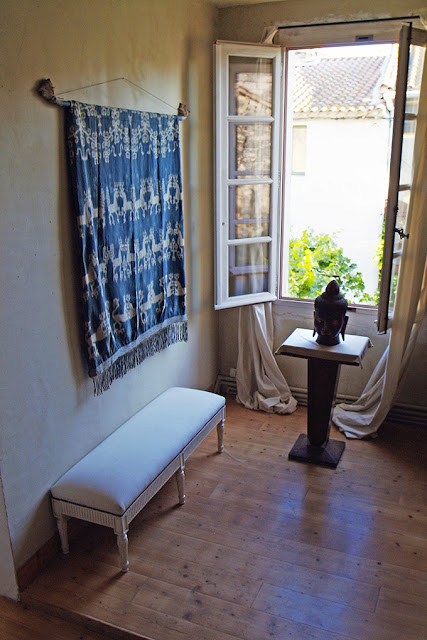 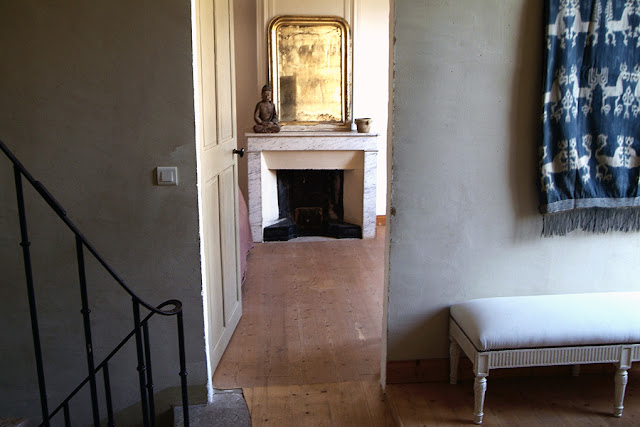 I don't miss the bench and yes have already used it when I need a good solid think...as in it might come in handy right about now... 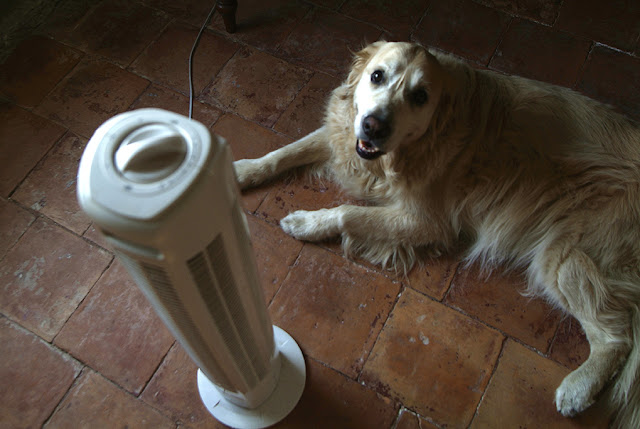 ...because did I mention the heat? Some of you might have heard about it on the news. For you see, this is not just about me whining (or whinging if you prefer) but is a national crisis. During a canicule, the temperatures remain extremely high all the time, even at night so that the body has a hard time cooling down. It is especially dangerous for babies and the elderly. This is the worst canicule since 2003 when nearly 15,000 people passed away due to heat-related causes.

We are trying to be wise about it all. Ben has it figured out as you can see... 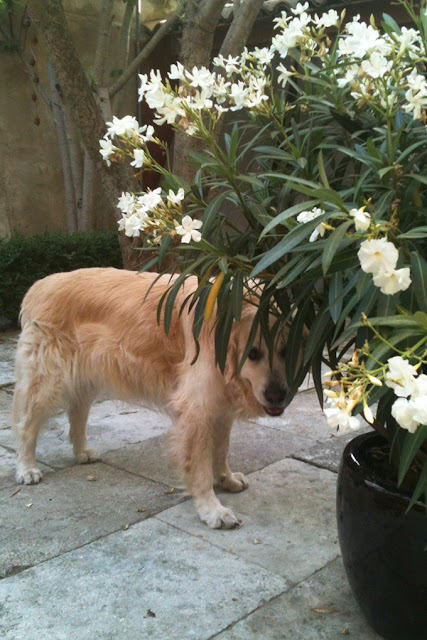 ...even when he is in the garden, he knows to take cover. 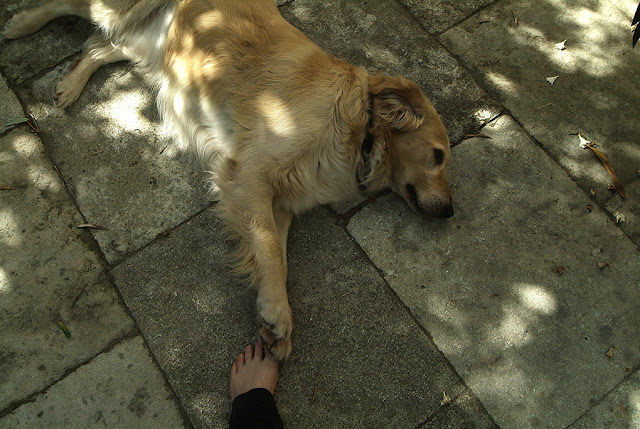 Kipling, our rascal, loves his sun alas (he also like to remain touching his loved ones whenever possible). Has it had an effect on his thinking? You tell me...

Yes, that would be a corncob playing the role of evil alien. Oh, Kip. Well, at least I am not the only one...

Wishing you all a wonderful weekend and for those that are celebrating in the States, Happy Fourth of July!