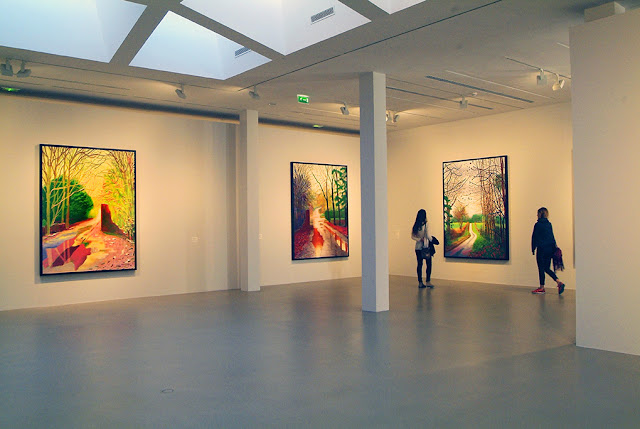 And so I am afraid that I can't begin to give you anything resembling an unbiased review of David Hockney's newly opened exhibition "The Arrival of Spring" at the Fondation Vincent Van Gogh Arles as I was too busy smiling instead of analyzing. And I wasn't the only one.

Mr. Hockney is widely acknowledged as one of our most important and influential contemporary artists. While known primarily for his giving high brow credit to the burgeoning world of Pop Art in the 1960's, he has continuously pushed his visual boundaries and ours in the process, not unlike Vincent Van Gogh some seventy years before him. Both sensorially and semantically, the mesh of these two brilliant artists aesthetics is a perfect fit for the Fondation. Through the presentation of twelve inkjet reproductions of works created on his ipad, along with twenty-five more traditional charcoal drawings, we are drawn into Hockney's world (in this case the woodlands surrounding his native Yorkshire, a rich opposite to the white lights of his current home of Los Angeles) all while realizing that we have trodden these same paths before - in line and in bold non-imitative palette - under Vincent's tutelage.

But again, don't listen to me, I have already let you know that I loved what I saw, instead take a look at this description from the exhibition's introduction:

"Both the iPad and the charcoal series of drawings were produced outdoors in the East Yorkshire countryside, which the artist observed attentively as winter gave way to spring. Working with the touch-screen tablet, which Hockney uses as a digital sketchpad, allows the artist to explore a new visual language while at the same time affirming his love for colours, here taken to their most luminous heights: “I don’t know how I see colour, but I see it, and I like it. I suppose I exaggerate it a bit 1”. The charcoal drawings simultaneously invoke Hockney’s fascination for Chinese scrolls, which inspire in him the idea that black and white contain colours, as well as with the compositional changes in the Woldgate landscape over time – an exercise in patience to which he had to subscribe to in order to paint the same view on five different occasions."


I am afraid that my photos of what came out of that process won't begin to do them justice but it will give you an idea. Had I never really seen a Hockney in person before? That seems unlikely but in looking at these pieces, most certainly the ipad paintings, I fell into them with a click of "Oh, now I get it." And yet when Remi, my companion, came to join me later on, he was undecided as to the "why" of using an ipad, the validity of the search. I told him that it had been the subject of numerous discussions in the press when Mr. Hockney unveiled the first ipad pieces, which were done in 2009. At the time he responded about his use of the ipad, "Who wouldn't want one? Picasso or Van Gogh would have snapped one up."

You see? There is Van Gogh again. And I can't help but think he must be right when imagining poor Vincent trudging out to the fields with his easel and array of brushes on his back that inspired the locals to call him "the porcupine." How much easier would it have been to simply carry an ipad and no paints at all?

Not to mention there is an immediacy to the works created that is really present in the final result, one that is quite in sync (sorry about that) with our current fast-forward times. One thing that I did notice however is that the technology that Mr. Hockney is using has improved since his first ipad work - the colors are so vibrant as not to be believed now, quite different from his initial pieces which, in their faded state, seemed like copies of an idea wishing to be realized.

One of the aspects that charmed me most of this exhibition was seeing how the children there responded to the ipad pieces, which seemed almost purposefully hung low on the walls for their enjoyment. And they did, as I did, for in viewing Mr. Hockney's "The Arrival of Spring" I couldn't help but be carried away on a whistle of the enchanted hope that such a very fine season brings and the promise of a beautiful new. 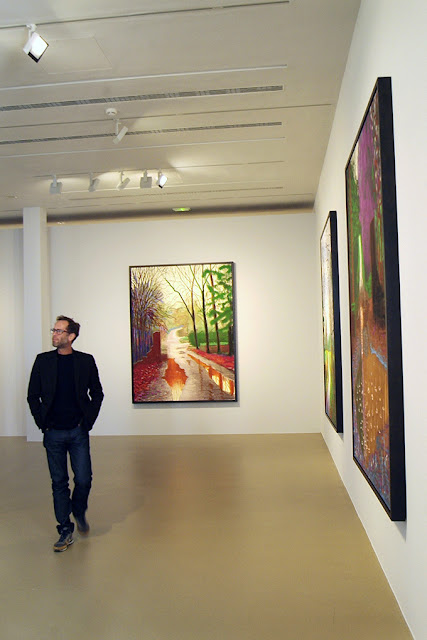 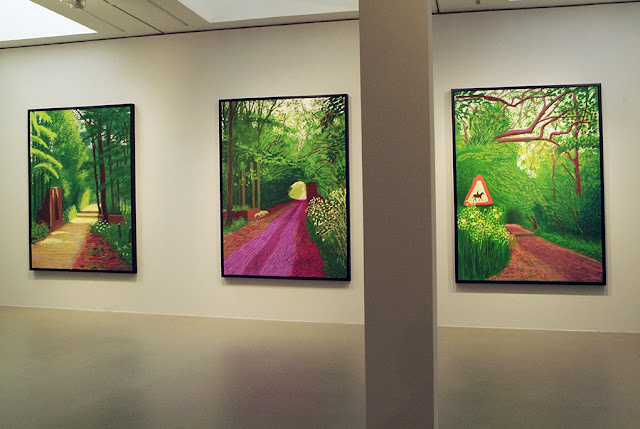 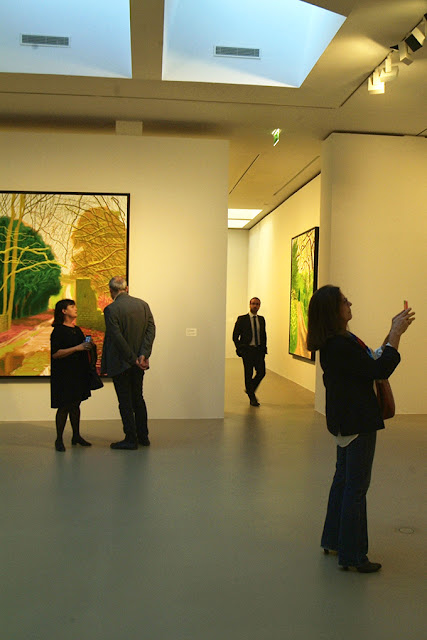 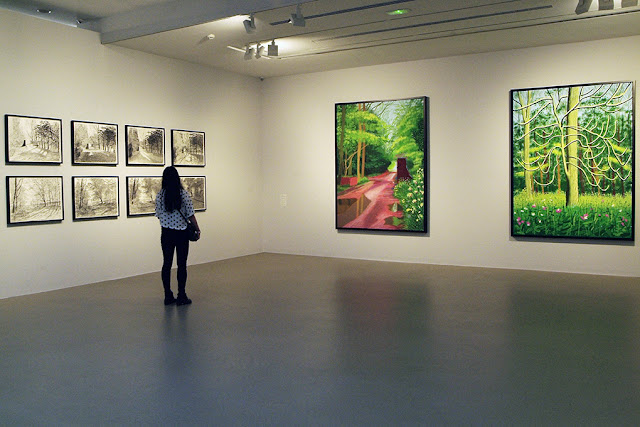 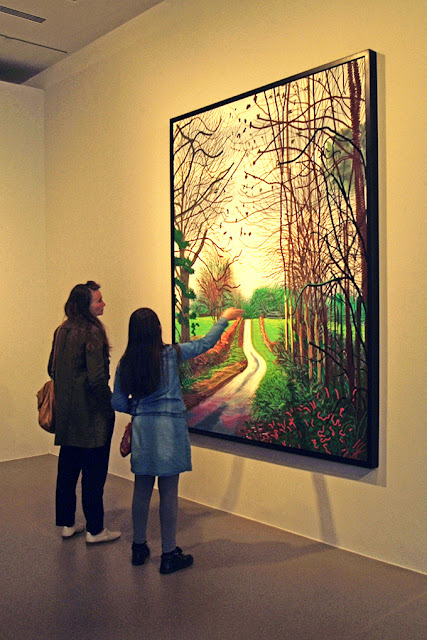 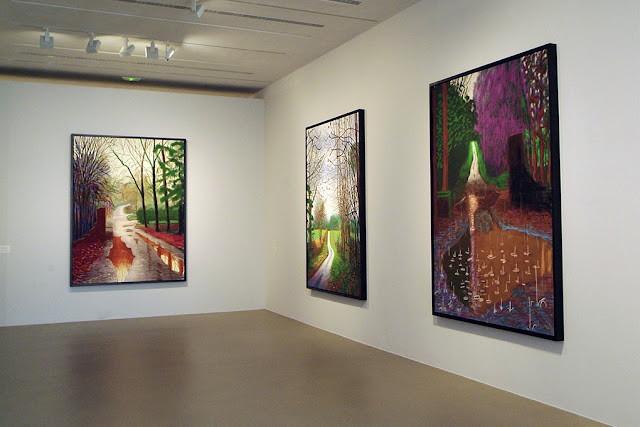 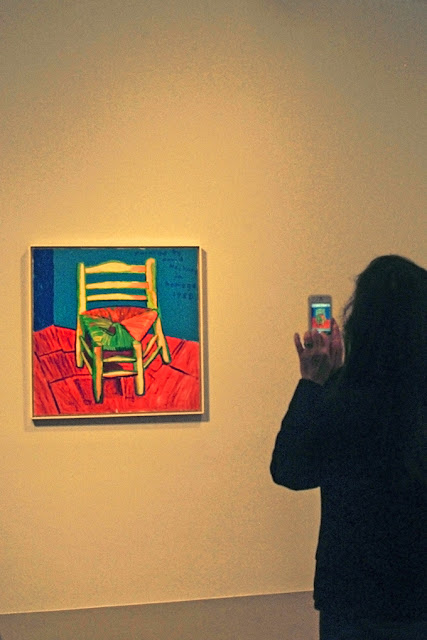 "The Arrival of Spring" is not David Hockney's first collaboration in Arles.

In 1988, commissioned by La Fondation Vincent Van Gogh d’Arles, David Hockney created three portraits of chairs after one of Van Gogh’s most famous paintings – Van Gogh’s Chair (1888).
“Because of the many viewpoint seen in these pictures, the eye is forced to move all the time. When the perspective moves through time, you begin to covert time into space. As you move, the shapes of the chairs change, and the straight lines of the floor also seem to move in different ways.”
- David Hockney (Hockney’s Pictures, 2004) 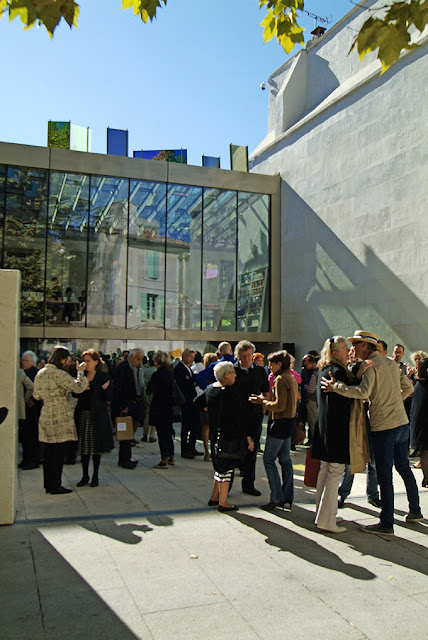 If you happen to be in Provence, please do stop by and see this wonderful exhibition.

From October 11th 2015 to January 10th 2016
Open Tuesday through Sunday, 11am to 6pm
Admission is 9 Euros, 4 Euros for young people and students, free for children under 12
http://www.fondation-vincentvangogh-arles.org/en/ I will leave you with one of my favorite photos I have taken in a really long time.
Thank you for being here,
Heather