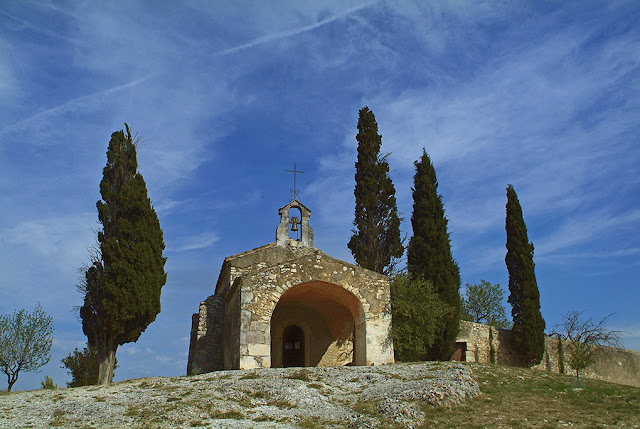 I have written frequently about my fascination with the layers of history that have been laid down in France. Time periods waggle fingers at each other - the you should have beens - or blush in coy shades of regret or admiration decades, if not centuries, after the fact. 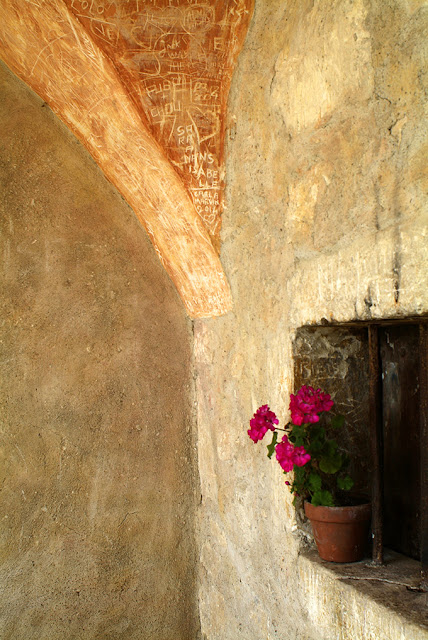 It is one of the many elements of living in this old country that I never tire of nor ever quite grasp either, not entirely, if I am being honest (even when I like to think that I do). Blame it on the American shiny new in me. It has taken ten years of living in Provence - where the length of history's reach is more blatant in the everyday than in Paris - for me to start to soak up the joy of so much existence present along with its past, both stitched together tightly. 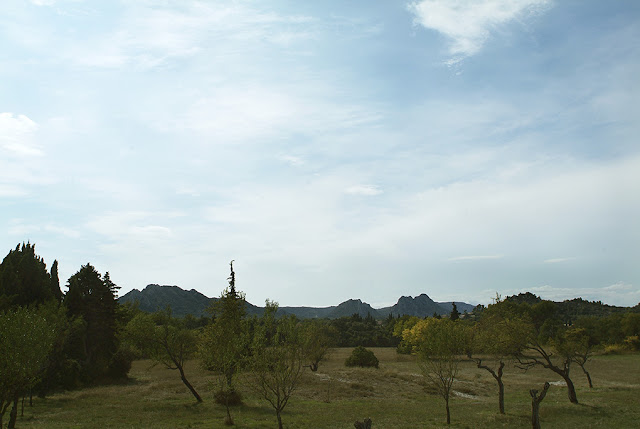 But there are most certainly places that give me direct peace in their seamless cohesion. 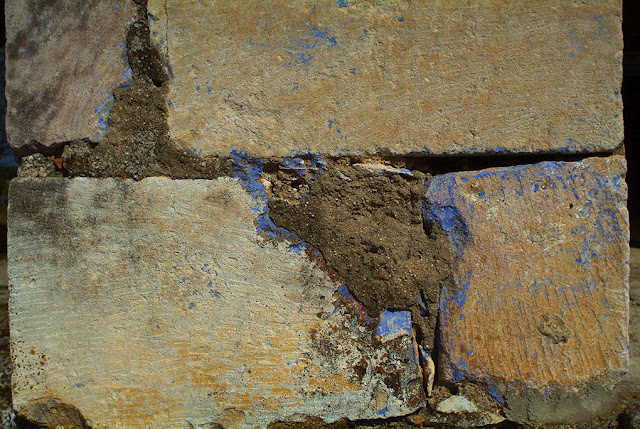 That is the case each time that I visit the Chapelle Saint-Sixte on the outskirts of the charming village of Eygaliéres. 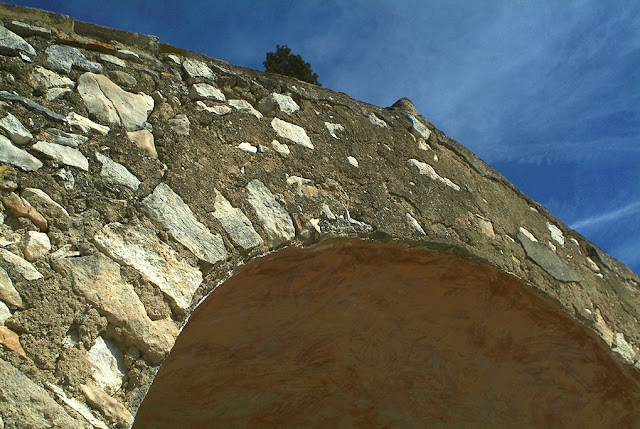 As one of the most treasured sites in Provence, its ochre-domed porch fronts hundreds of postcards... 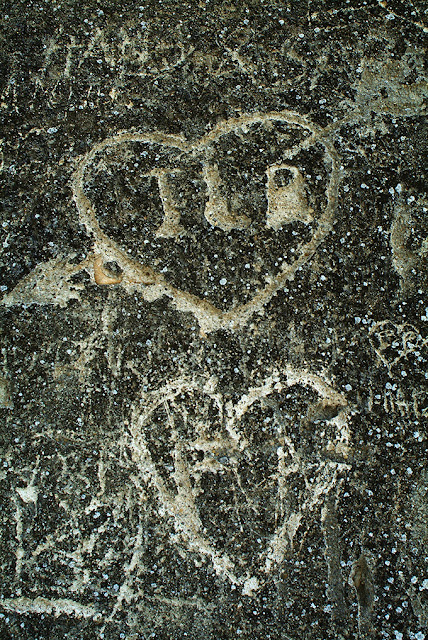 ...and is the shelter for many a spring wedding photo...or other testaments to sentimental love... 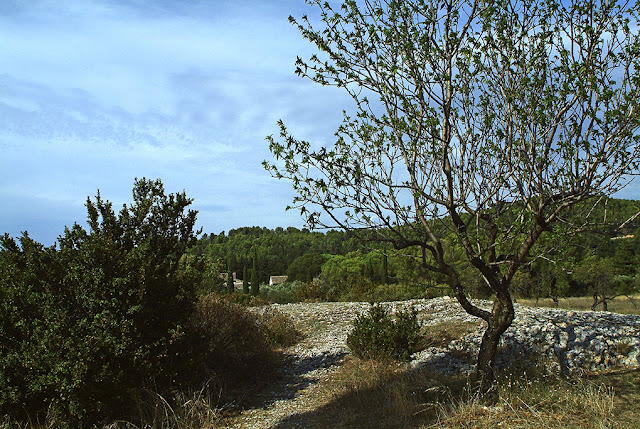 ... but the history of its stones reach back to before recorded history.

The surrounding scenery seems to know, nodding with cypresses reaching heavenward and vines that are twisted dry under the weight of too many seasons. 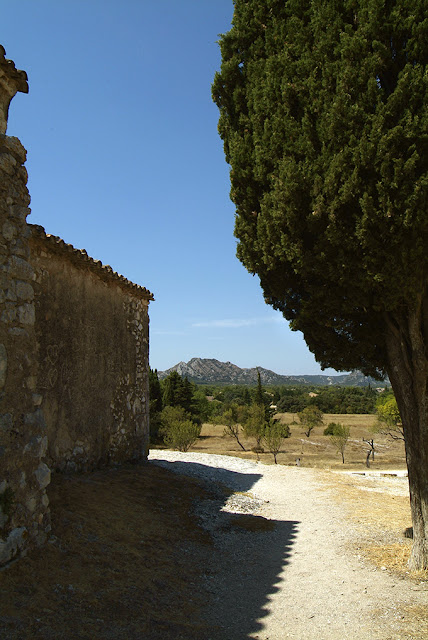 A stèle or Stonehenge-like marker stone was in place until the 19th century and it is believed that it marked the site of what was originally a pagan temple dedicated to the cult of water. And yes, a source was present here and it was from this temple that the veterans of the Rome's 6th legion chose to build an aqueduct to deliver fresh water to the citizens of Arles - nearly 30 miles away - during the height of the Empire's rule. The nearby village of Eygaliéres would take its name from the Roman word Aqualeria for its wealth of refreshment. 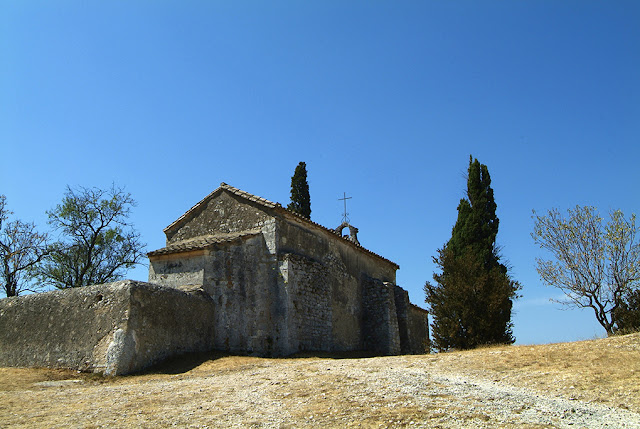 The current chapel is one of the clearest examples of Provençal Romanesque architecture in its simplicity and form. The first mention of it was in 1155 but it was the reference to Easter Tuesday in 1222 that launched the pilgrimage to the chapel from the village (actually a "roumavage" in Provençal which comes from "a voyage to Rome") in order to plead Saint Sixtus to supply water for the following years crops - one that has continued until this day. The elongated porch was added in the 1629 to serve as a guard-post for inspecting travelers during the plagues of that period and a bell was restored to its tower in 2008. 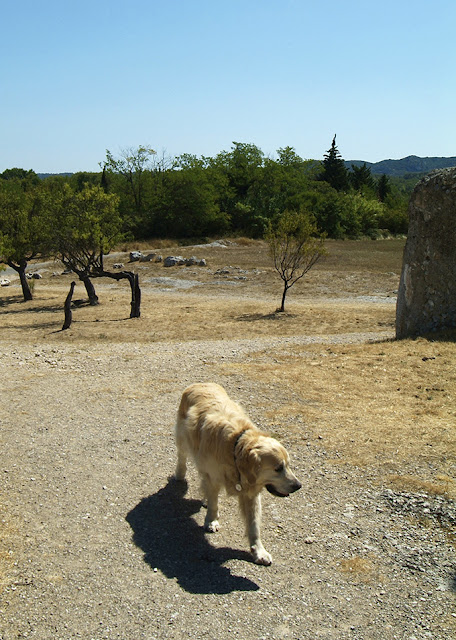 When we took my Mom and her husband Leonard to visit the Chapelle Saint-Sixte last September, I wandered around with camera in hand, still under its spell after all of these years. Both Leonard and I were intrigued by the many traces that time's graces had left, some so small and yet each so significant.  When I returned to the porch, I found Remi and my Mom deep in a theological discussion concerning the overlapping present in the main religions, with my Mom providing her perspective as a Buddhist. They talked all the way back to the car, heads nearly meeting in thought. 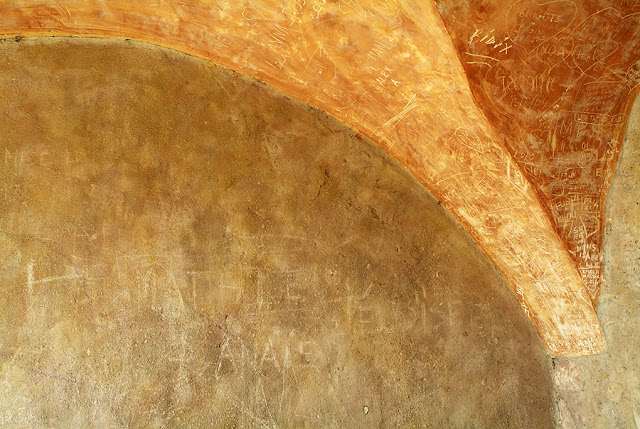 And that in itself, made me feel quite content. After a thousand years, a site can still be sensed "holy" by many and a touch of faith is continually inspiring in its largesse. Here is to hoping that time will be patient enough and receptive to our efforts so that such layers, thinner than a thread of silk, will be spinning out harmoniously in as many years to come.

The Chapelle Sainte-Sixte
Route d'Orgon
13810 Eygaliéres
Mass is held on Thursdays at 9:30am in summer

PS. My beautiful Sister, Robin, who many of you will know of from her wonderful comments here, is celebrating an important birthday today (well, they all are but you know what I mean!).
Happy Birthday Robin!
I love you so much Sister,
Sistee