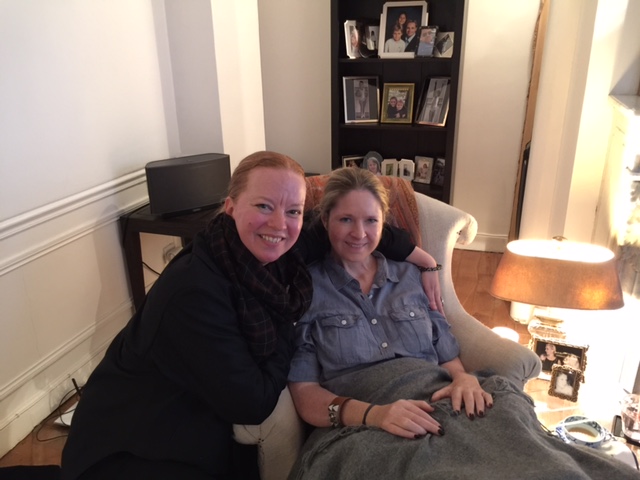 I remember after the first time that I met her in Paris (when the above picture was taken), I was literally buzzing, nearly shaking with happiness and just this phenomenal energy as I made my way first to the Gare de Lyon and then all the way back down to Provence. Her star shined that bright, even in the confines of her ALS bound body. The amount of love and laughter and incredibly wise perspective that she had to share, so directly, was like nothing that I had ever seen.

Not having time to waste, we declared our friendship that night. I still feel really honored by this.

When she said a few months later that she definitely wanted to move down to Provence, I was on it, searching for possible houses immediately. The courage that it takes to leave Paris is huge. I did it myself when I moved to Arles with Remi in 2005. But Ellie did so while paralyzed from the neck down, with only her caregivers as her main company, knowing that her husband David and her daughter Grace would most often only be able to join her on the weekends. And yet she didn't look back until her declining health forced her to return to Paris and palliative care.

I had already left Provence at that point, but while there, I would do anything for her - too much - to show my love. Her family would make fun of me (with kindness) because of the insanely over-elaborate lists of suggestions and recommendations that I would spend hours concocting for their visits. My friend L ran into her a few times while Ellie and Co. were out at an antiques or food fair and would always remark at how strong she was even in the midst of the crowds staring at her in her wheelchair with her breathing mask on. That is Ellie too. She was determined to enjoy whatever she could (and occasionally pushed herself too far when the temptation of, say, a Frito beckoned) and without apologies.

She was so excited to surprise me that she had found the house to rent. Little did either of us know that it was located only at a twelve minute drive from mine. We honestly had no idea. She wasn't even exactly sure of the name of the town that she lived in until I explained it to her. She just found the house and made it happen. Given the proximity, you would think that I would have seen her every day but I did not drive yet (and am still working on it), there was no bus transportation and I was not in shape enough to bike it. But Remi would take me when he could and I watched as she (not-so) slowly transformed the wonkily decorated house into something so her, something really elegant yet completely welcoming. Again, how could I have had my doubts? This is a woman capable of anything. With Joel, one of her amazing and loyal caregivers, I helped to hang the lights on the Christmas tree while the Mistral roared outside. I surprised her with a bit of patisserie on New Year's Eve (before David surprised her by showing up an hour later) and she outdid me by somehow persuading him to pull their enormous Mercedes into the tiny lane outside my house the next day. I crouched down by the open door of the back seat and we talked, I was so happy to start the New Year in seeing her. Ben and Kipling came out and licked her hand. That was the last time that I was able to be with her in person.

My life took a dramatic shift not long after that. And she did not let me down, even though I could hear that her voice was getting weaker when we spoke on the phone. Of course, she said nothing about that. She listened to me, let her opinions fly with stinging precision but also knew just what to say with common sense and care. I can hear her voice so clearly: "If I can survive...one day...with this disease...then you will get...through this." I think of that nearly every day. It was Ellie who I would turn to for strength, just as I did my best to offer it to her (at the very least she knew well that I was never scared of her decline). She was also the first person I wanted to tell after my family when I took her advice: when I arrived in the States, when I passed the test for my driver's permit, that I was starting therapy...I suspect that a lot of us, whether close friends or less so, felt that way about her - that she was someone to share the good stuff with immediately. She was in contact with thousands of people and yet somehow managed to make each one of us feel special and important.

Once she was again in Paris, despite having just been released from palliative care and her increasingly weak physical condition, she managed to not only keep her shop open but self-publish her third book, And So It Is, which tells the story of both her life and what it became while living with ALS. It is an incredible book, one that moves far beyond any trace of sentimentality to hit right to the essence of her experience. I literally do not understand how she made this happen but, along with her blog, Have Some Decorum, it is an important part of her legacy - one of being awake to the value of one's life - that I often told her was "The Ellie Revolution" (I also used to say that she could stop a war just with the power of her baby blues but that is another story).

Her last and perhaps most spectacular decision was her recent choice to return home, to the US and to her beloved California. When I had asked her about the possibility of doing so in the past she said that there was no way that she could make the flight, that the doctors would not allow it - but she did it anyway, supported by a generous friend who sent his private 727 for the occasion. From there she was able to get installed in the same compound that she had loved and left to live in France. It was truly meant to be, a gift from above.

While we would continue to email, I made a decision to talk to her less - it would break my heart to have to ask her to repeat things when I couldn't hear or understand her and frankly I wanted her to save her precious breath for David or Gracie or her best friends Jennifer and Yolanda. But I do hold especially dear one of the last conversations that we had (every single one of our conversations was special, we could talk for hours and hours and hours without pause back in the days when her voice was stronger). She wrote about this later actually, but it was a Sunday and she had gone to her favorite little church, this is still in Paris. There she had a "come to Jesus" moment, except that in it, she told God that she was ready to go soon. And to be truly Ellie, she took things one step further by saying that she was ready to go to work for Him. When she told me that, even though it was such a serious moment, I couldn't help but laugh and say, "Oh my God, you are going to make the best angel. The most kick ass one!"

And she will. She is.

From what I know, her passing was exactly as she wanted it (because save for having ALS and dealing with workmen in Provence, she always got her way). She was surrounded by the love of her family and friends and she was at peace. I was one of her new friends and am incredibly grateful for every moment that I was able to spend with this extremely unique human being. There is so much more that I could say about her (and my thoughts are still fuzzy with my own grief, please pardon any errors here) - about her physical beauty, her brilliant impeccable taste, her wit, her steely intelligence, her thoughtfulness and caring. Not to mention her sheer force of will. While I feel immense relief that she is finally free of her physical suffering, I cannot stop thinking of David and Gracie, of her sister Heather, her parents, her incredible friends and those of you here and all over the world who loved her. She said that she could feel that, you know. To everyone involved, I am sending my love and strength, even though it is a drop in the ocean of your sadness. I am so sorry.

You most certainly are, because you will live on. Let the angel work begin, Ells.

I love you, beautiful one,
Heather bis